You can customize Path of Exile’s weapons and gear, socketing in gems and making other tweaks as you battle map after map of monsters. But in what could be one of the most interesting innovations for action-role-playing games in years, Grinding Gear Games also lets you customize maps, adding new areas and bosses for the endgame. Now the endgame finally getting more love from the studio — and a real story.

When the Atlas of Worlds expansion comes out on September 2, the slice of Path of Exile’s 14.2 million players that have played through all of the action-RPG’s content will find a new endgame experience that adds a narrative, 30 maps, 19 new bosses, a gaggle of new items (including some made by Path of Exile’s community), a new league, and a significant tech improvement: multithreaded engine support, giving the online game’s performance a big boost. Path of Exile ranks 19th in the worldwide free-to-play massively multiplayer online game market, says research firm SuperData, and new content and systems like this help such services retain their players — and find new ones.

The story is all about the Shaper, a being who is trying to create what he sees as the ideal pocket dimension inside the Void, where the lands in these maps exist. “He has this perfection thing where he wants to make this perfect universe of places that kind of edify, deify him,” Rogers said. “He’s got this god-thing about him.” 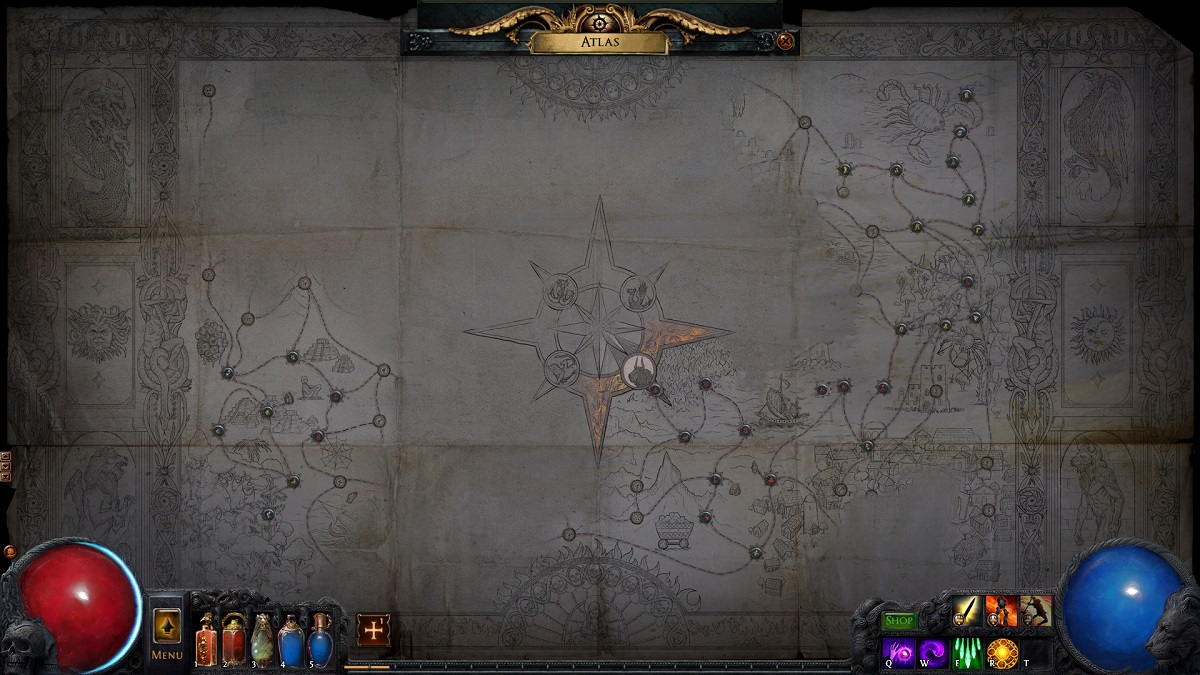 Above: That’s one big map.

At any given time, 25 percent to 75 percent of players have reached the endgame, managing director Chris Wilson said.

Map system gives you map items, which take you to new area, and each has a boss. Now this gets some narrative to hold it together in the Atlas of Worlds. It starts with four maps in the corners, with the rest covered by a fog of war. As you find more parts, you go through more of the Atlas — 100 areas in total (an Act in Path of Exile has . Every area has its own boss. Each area you visit represents a location on the map, like the desert (it has a scorpion on the map).

“We wanted to revamp the endgame entirely,” said Jonathan Rodgers, the technical director at Grinding Gear Games. “Right now, we have the map system, which a lot of players really love … but what it doesn’t have is any kind of real structure or plot or anything like that. So we wanted to go and tune the endgame, add a lot of systems to it, add a storyline to it.”

And since these maps are procedurally generated, they’re different for every player. Rogers blurted about the grass in surprised when he went to the Oasis, noting he’d never seen so much vegetation so close to the starting area (and assuring me this was not scripted).

To get into the Atlas of Worlds, you have six single-use portals at a time. Or you can have up to five others join you and use them — but only once if a party of six heads into the portals. This gives you a trade-off and some consequences for when the nasty monsters inside pummel you.

“Maps, since they are items, have an economic aspect to them,” Rogers said. “We didn’t want people to be able to bash their head against the same map over and over again and dying over and over again. If you finish a map, it actually means something.”

Disclaimer: Grinding Gear Games’ Chris Wilson is not related to the writer despite sharing the same last name.