VRLA, the world’s biggest VR convention, was closer to a theme park this year than a trade show. You waited in long lines, abused your body with impractical thrills, paid too much for merchandise ($40 t-shirts?) and then went home giddy and dizzy.

Unlike a theme park, each booth had a business model at stake and a crowd of early adopters to please. Their demos pulled out all the stops.

Here are the 12 that made this jaded attendee mouth that three-letter word: “wow.”

Before we begin, please allow me one staid note of caution. There’s a big difference between a thrilling demo and a viable product. Remember the Pepsi challenge? Pepsi won all the taste tests because it was sweeter. That made for a great impact at the cost of flavor and sales longevity. The same is kind of true for VR; the more complex and accessory-heavy the demo, the more business challenges ahead for the product.

Cynicism aside, let’s jump into the wow!

Wow Demo 1: Reggie Watts
Okay, James Corden’s side kick on the Late, Late Show wasn’t technically a VR demo, though after seeing him perform, I’m not convinced that he was human either. The keynote speaker for VRLA delivered an epic, unscripted monologue full of subtle jabs and non sequiturs. VRLA desperately needed a devil’s advocate to temper the hype and Mr. Watts delivered. Watch him go nuts:

Wow Demo 2: People holding VR cameras during panels
(I know, I know, but bear with me on this one)

Like most trade shows, VRLA had plenty of panels and talks. If a talk became too technical, I’d find myself leaning back and gazing at the filmmakers in the audience, who were raising their 360-degree cameras to the sky like lighters at a concert. Some of the cameras were orbs, some were rods, and the rest were rods with orbs (they all looked like sex toys, frankly).

Seeing the future of handheld cameras in the wild was arresting but also inspired a dark thought. If someone’s taking a normal picture or video, they’re only snapping what’s in front of them. The people to their left or right or rear are safe. But with VR cameras (and soon VR camera-capable smartphones), no one’s safe. Privacy will lose another foothold.

Wow Demo 3: VR Rave
A handful of companies collaborated to create this spectacle, which was billed as the world’s first VR rave. It was such a complex sight that I’ll describe it by parsing out what each company contributed.

It started with a DJ, who spun music, wore a headset and used TheWave’s software to create VR visualizations.

Behind the DJ was a giant LED wall by 3D Live. Attendees on the sideline could don movie theater-style glasses for a 3D effect. It’s funny, I never expected to be impressed by old-school 3D, but 3D Live’s technology looked a lot better than IMAX.

Dancing participants wore Skullcandy’s new VRA headphones as well as Subpac vests, which transformed each beat into a physical sensation.

Phasespace’s motion capture technology kept tabs on everyone in VR so that there weren’t any collisions on the dance floor.

It was an epic premise. As for participation, well … I’ll put it this way, most raves are fueled by alcohol, energy drinks, and illegal substances. VRLA’s rave was fueled by their official beverage sponsor: Nesquik. 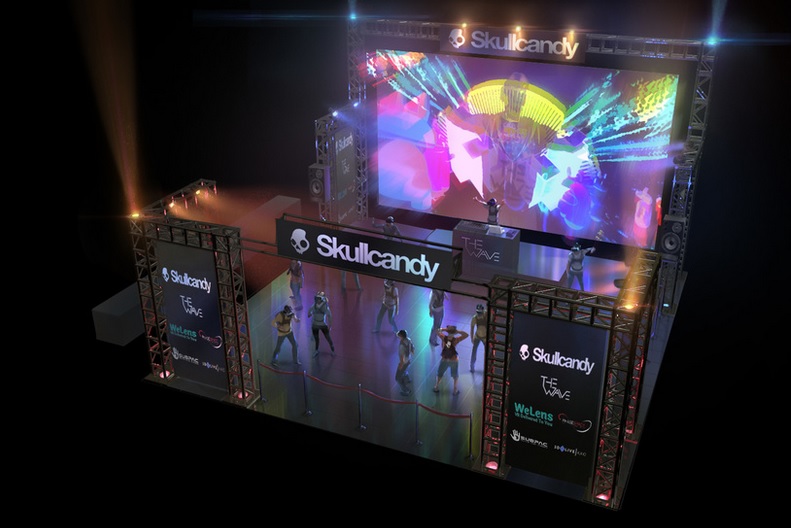 Wow Demo 4: Positron Voyager (aka Egg Chair)
I didn’t really want to demo the Positron Voyager, which was shaped like a giant egg and didn’t do anything except lazily spin left and right. Here was a VR accessory for Homer Simpson.

Still, the line was short, so I plunked myself down, ready to take a nap. I walked away smiling. It turns out that simple rotation goes a long way in VR. No neck craning and no stress that you’re not paying attention to the right place. And even though the device only goes left or right, your brain perceives backward and forward movement as well.

The Voyager pivoted me through a strange Chinese animated short. I felt like I was happily floating on a guided Disney ride, ala It’s a Small World. I want to watch all VR films this way. The best part? I could down a cold beer while doing so. 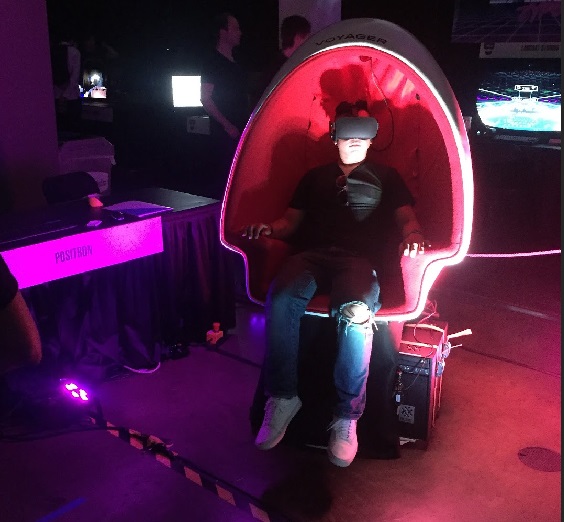 Wow Demo 5: Whirlwind Vortex
The Whirlwind Vortex is about the size of a PC tower and brings the fancy wind effects of a large-scale convention installation to your desk (if you can find the space). While feeling the blowing of a breeze was pleasant, the Vortex’s other trick is what impressed me most: It can radiate pulses of heat.

I know what you’re thinking, fireballs and explosions and all that, but controlling temperature in VR can have other creative uses. The warmth of a hug, for example. 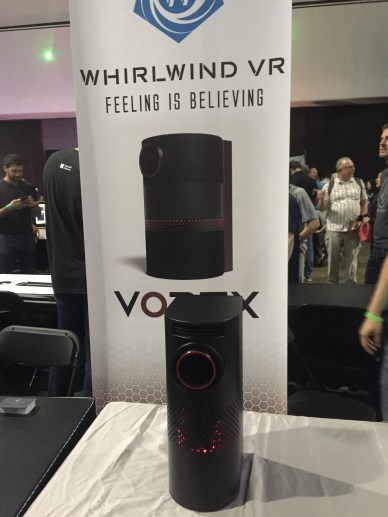 Wow Demo 6: MindRide
MindRide won my “I’m gonna get so many likes by posting a photo of myself in this thing” award. The setup involves getting strapped into a neon-lit Mission Impossible style harness (see the photo at the top of this post).

Once locked in, you twist your body and throw your arms around to fly through the air. Wind rushes by to simulate speed. I had a hard time flying through giant floating rings, but I appreciated the learning curve: flying should be hard!

Hey, SEGA, if you rent this device and swap the software for Nights into Dreams, you’ll have the longest lines at any convention.

Wow Demo 7: Trike racing
I once played a horror game in VR that was so frightening, my ESC key almost broke. I’ve since avoided anything in the genre.

Well friends, it turns out that you don’t need ghosts or zombies to conjure terror in VR. Interactive Lab, a company based in Russia, cordoned off a section of the show floor to demo an electric bike that was mapped to a VR racetrack. You hop on board and accelerate through a Mario Kart/TRON-esque environment as you’re also accelerating in real life.

Blinding yourself to reality while operating a vehicle in a crowded convention hall is not an experience for cowards. I kept imagining a wayward child leaping in the way or a wrong turn hurtling me into the crowd.

Maybe version 2.0 could use an AR headset instead … 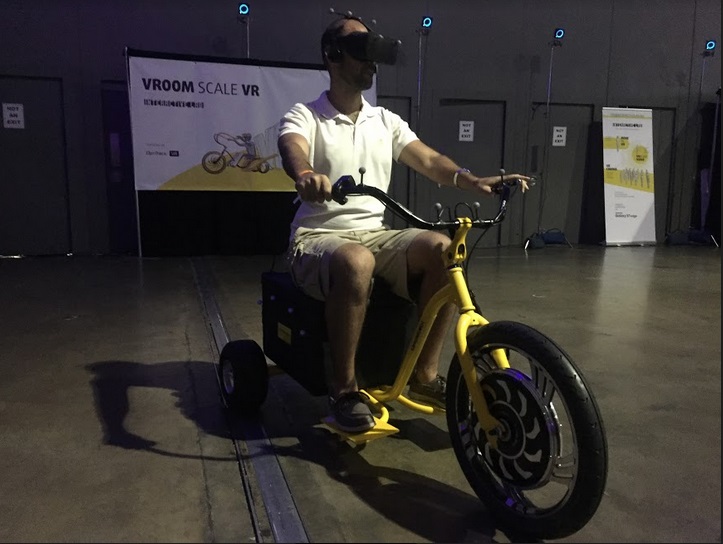 Wow Demo 8: Xtrematic extreme machine
Remember that old Alpine skiing arcade game? The one where you’re on a platform, swishing from left to right as you blast down a slalom? Well, Xtrematic, based in Belarus, has created the VR equivalent.

You stand on a vibrating, tilting, wind-pumping platform and throw your body weight around as you navigate extreme activities, like ATV riding and hand gliding. The machine, meant for malls and arcades, is apparently a hit in South America. Judging by the shrieks it elicited, it could be a hit here in the US, too. 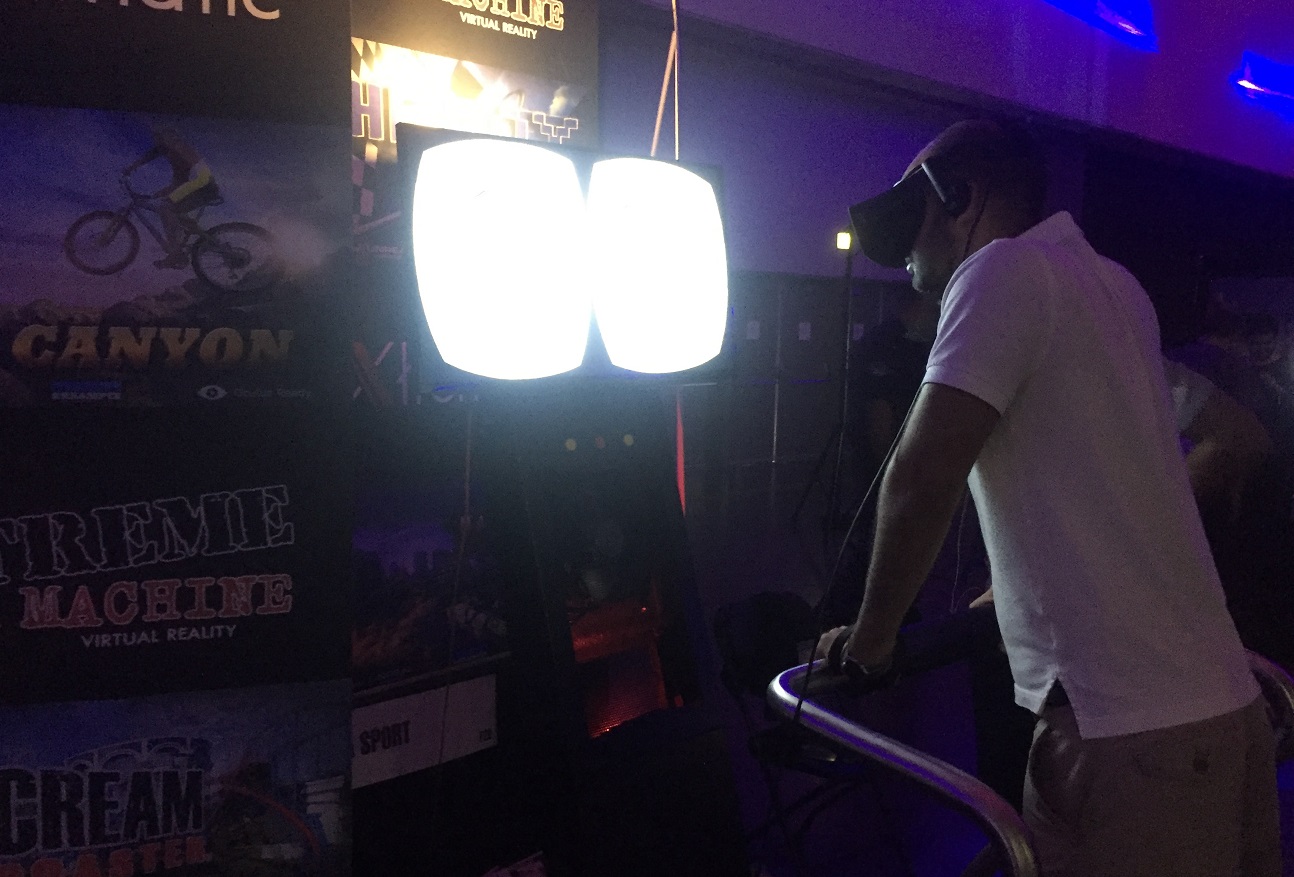 Wow Demo 9: GE interactive experience
I once interned for a startup that monitored corporate websites. I spent a lot of time reading About pages and Shareholder pages and Our Values pages. Intern-me always pitied the poor people who produced those websites, drained of all creativity by a panel of Ebenezeer Scrooge lawyers scrutinizing their every keystroke.

GE’s experience made me say ‘wow,’ not because I was enamored by GE’s divisions and what they were up to, but because I could tell that the GE creative team and the developers at Deluxe VR had a lot of fun innovating around the assignment.

For example, you navigate the experience by picking up glowing sci-fi orbs and smashing them together. The violent collision teleports you to exotic locations, like under the sea or atop an airplane wing in flight, where a robotic voice mumbles something about sustainability.

I later talked to Andy Goldberg, the Chief Creative Officer of GE, about the production. He emphasized the importance of interactivity when storytelling in VR, bemoaning passive, guided experiences, and said that GE’s internal and partner channels helped overcome distribution worries.

Justifying VR investment with the current market size is hard, so building an experience that also educates employees makes it an easier sell.

I’m now hopeful for the future of corporate communication. 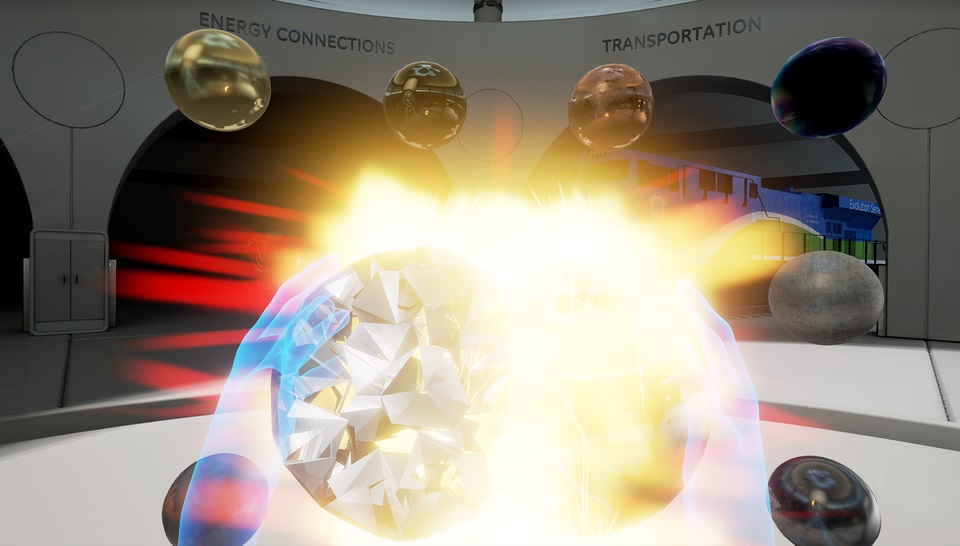 Wow Demo 10: Island 359
VR plus dinosaurs was always going to be a killer experience, and Island 359 by Cloudgate Studio didn’t disappoint. Instead of focusing on the game itself, which will be out soon and involves massacring cute but angry little dinos, I want to recount an important lesson the creator brought up during a panel. Because VR is more stressful on the body than non-VR, it’s critical to test experiences with a wide range of people, from the disabled to the elderly.

After the team tested Island 359’s demo with someone who suffered from chronic back pain, they realized that making players bend over to pick up weapons from the ground was prohibitive. That insight led to them to rethink their mechanics and make the game more accessible.

Walking the show floor, I wondered how many other VR experiences were simply out of reach for an important segment of our population. 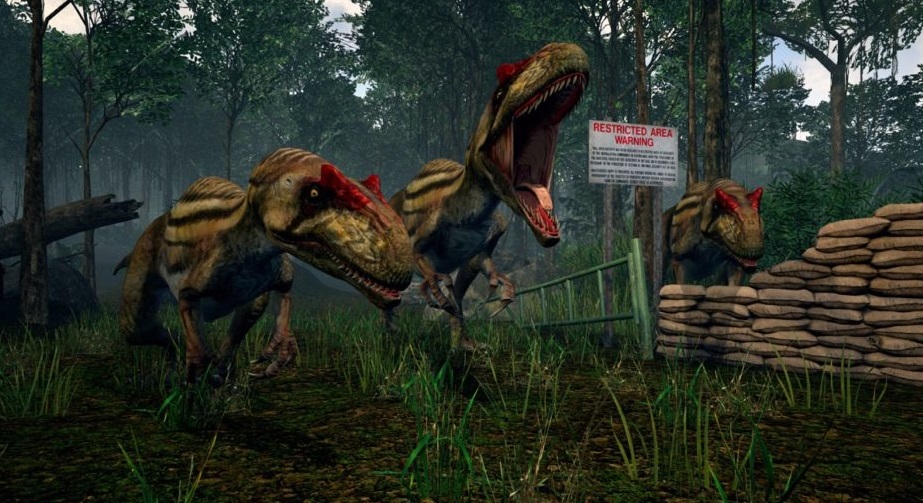 Wow Demo 11: Mindshow
Mindshow lets you craft VR stories by choosing a set, selecting characters, and then virtually inhabiting those characters to act out your stories. It looked slick, but before I tried it, I kind of wanted to hate it.

You see, the creators of Mindshow were also the creators and showrunners of VRLA, which meant that a healthy chunk of the opening show remarks on both days were dedicated to the software’s unveiling, which seemed a little unfair to the other startups, though they did disclose the relationship.

That said, Mindshow was the most polished and product-ready VR demo I saw (or maybe have ever seen). Every detail was crisply executed, from the UX to the character animations to the controls.

Motion capture won’t be the sole domain of Hollywood for much longer. 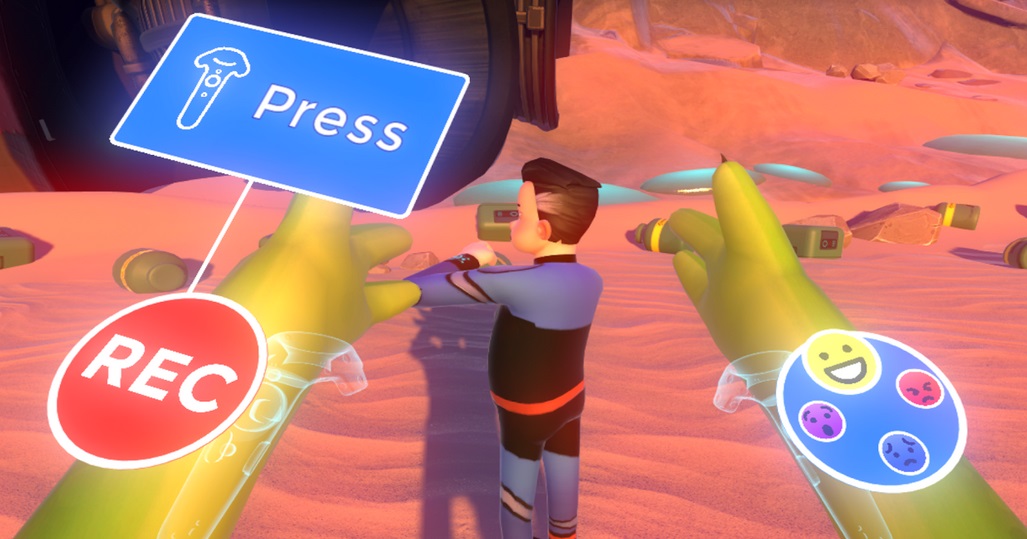 Wow Demo 12: Meta 2 AR headset
The Meta 2 is an AR headset that, while still very rough around the edges, gave me the most compelling glimpse into the future. With the device’s massive field of view and bright resolution, I navigated a multi-monitor AR workspace with my fingers (and I love AR workspaces) and conversed with a 3D hologram beamed in via the Kinect.

One neat gimmick: During the Meta 2’s panel, the presenter wore an AR headset that holographically floated talking points above the crowd. They streamed the effect live for everyone to see. Those of us who shy away from public speaking can rejoice; in the future we’ll all have teleprompters! 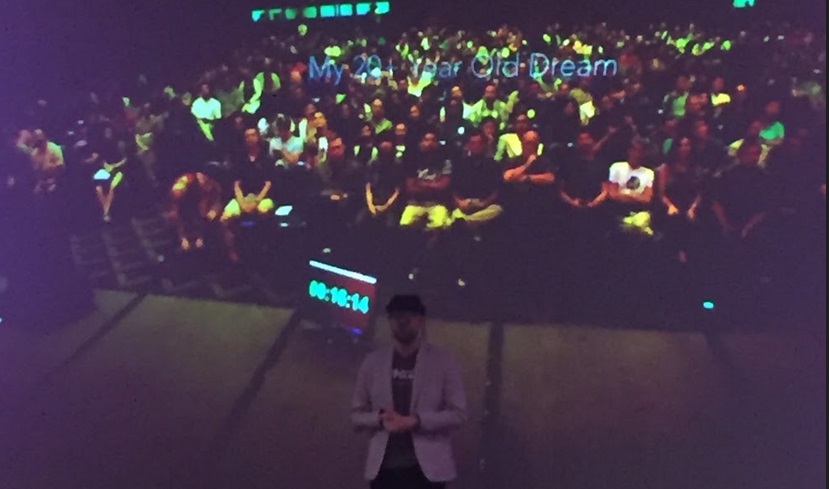