We’re in peak 360-degree media territory with a marketplace teeming with enabling devices. From the Ricoh Theta to the 360fly, I-mmersive’s Veye, Kodak’s SP360, and others, there’s no shortage of options. Samsung has tossed its proverbial hat in the ring with its Gear 360 camera, which launched in April. But how does it really stack up?

Although it’s relatively easy to use and performs as promised, the Samsung Gear 360 doesn’t stand out as much as it should, especially considering all the resources the company has at its disposal. And since it’s a first-generation product, there are some quirks that stuck out to us when reviewing the device, including issues around portability, software, and its proprietary nature.

Priced at $350, the Samsung Gear 360 is on par with many of its competitors. Weighing in at 5.39 ounces (153 grams), it’s equipped with two F/2.0 fisheye lenses that capture 195-degree photos and videos. Although it comes with a miniature tripod attachment, the device has a universal mount, so you can use it on a professional-grade tripod, a monopod, gorillapod, or even with a selfie stick — perhaps the preferred use case for many people.

Baseball-sized camera looks cool, but is it?

When Samsung first unveiled the baseball-shaped device earlier this year, I was excited about giving it a go, especially with the ecosystem that the company is building around its smartphones and virtual reality. But while the Gear 360 seemed cool at first, I started to feel self-conscious about using it out in public, imagining how odd it must look to see someone holding a round camera in the air perched atop a selfie stick.

And the camera’s unusual shape may be its biggest flaw: It’s not exactly pocket-friendly. This might dissuade some from buying it over slimmer cameras, such as the Ricoh Theta and LG 360. 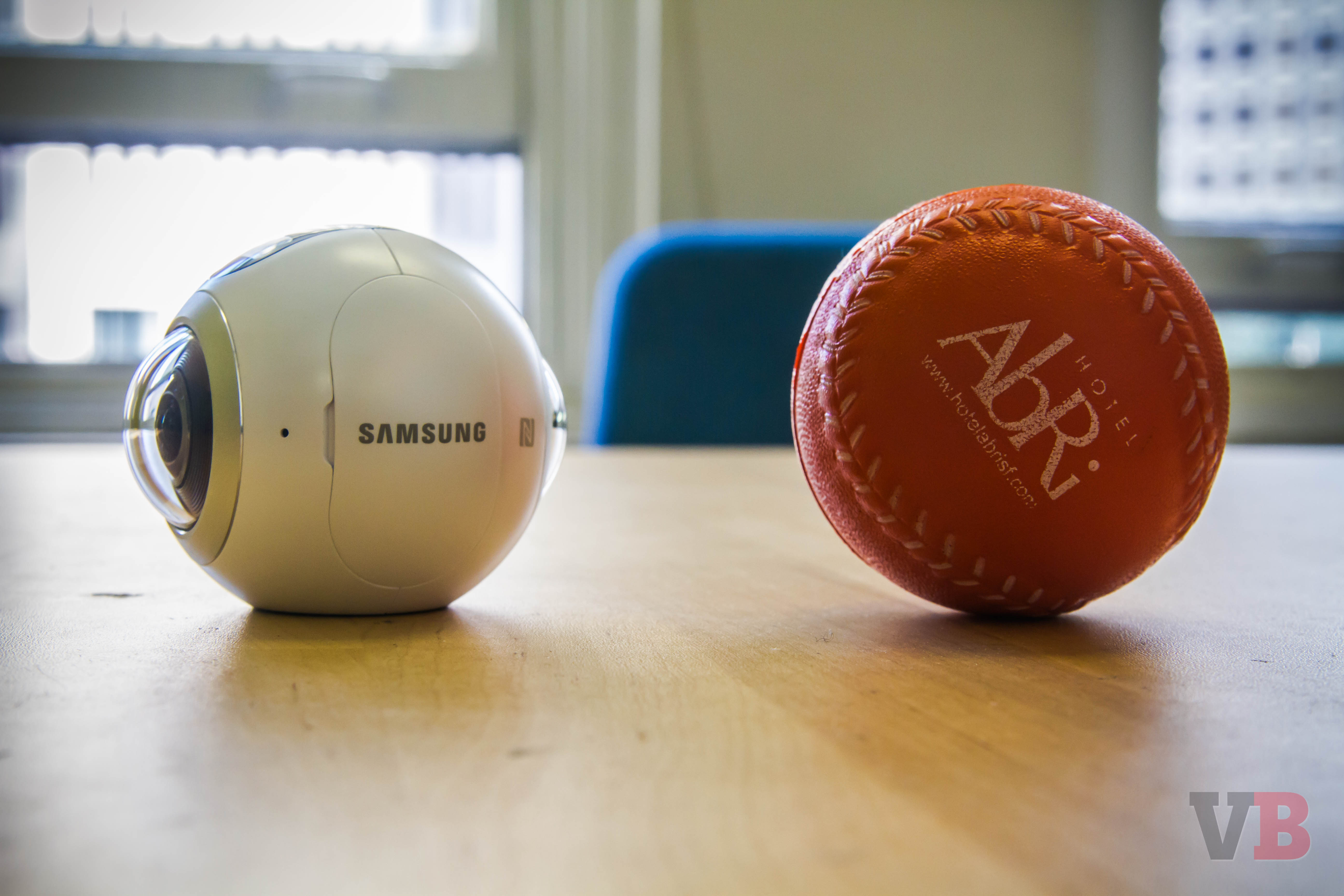 Above: Comparing the size of the Samsung Gear 360 with a baseball.

Whether walking through downtown San Francisco, attending a Golden State Warriors game, or even recording the annual Bay to Breakers race, the Gear 360 performed as expected. But it failed to fill me with any feeling of excitement around rushing around creating 360-degree content.

Even though the Gear 360 looks durable, it feels fragile — like if it’s dropped, there’s going to be a big dent in the body, or one of the lenses will shatter. And while it’s relatively light, it still falls like any ball — there was an instance where it slipped out of my hand while on a selfie stick and plummeted onto a concrete curb. The top of the Gear 360 was scratched; fortunately it didn’t break, but if there was an accessory or perhaps additional case Samsung could provide, that might provide some peace of mind.

Getting acquainted with the Gear 360

Setting up the device was easy: Download the Gear 360 app on your Samsung Android smartphone (currently there’s no iOS version) and pair it using Bluetooth. The Gear 360 can store videos either locally on your phone or on a microSD card. What makes things more interesting is that you can connect your phone to more than one device — if you are doing heavy-duty recording for a movie, for example. 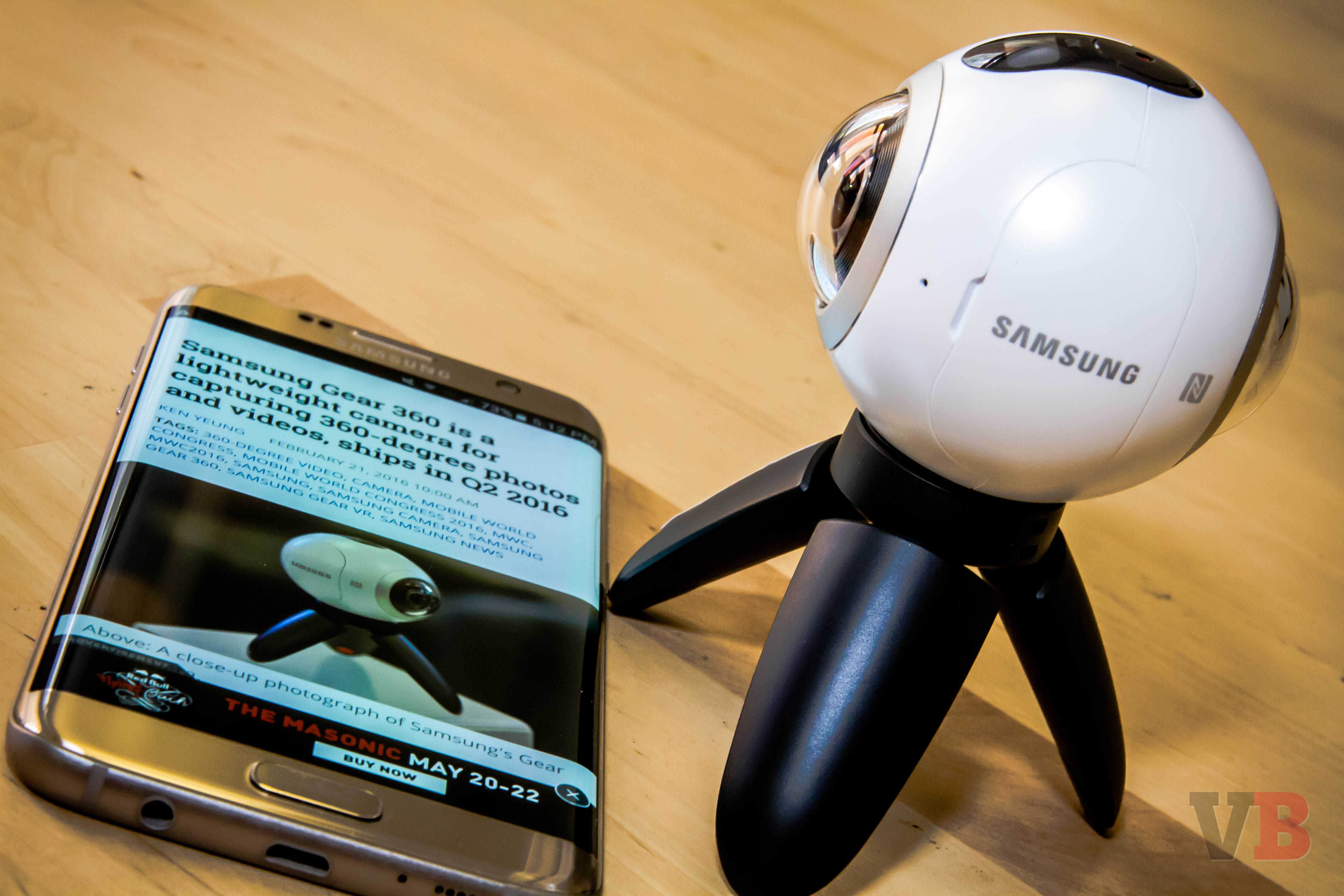 Above: The Samsung Galaxy S7 edge smartphone with the Gear 360 camera.

You can review your footage right in the app, which will stitch everything together to make it appear seamless. During playback, there’s a motion view option that you can toggle — if it’s locked, you’ll have to manually move the file with your finger to scroll around. But if it’s unlocked, physically rotating the phone makes it seem like you’re actually there — perfect if you’re using the Gear VR headset.

The app functions as more than a remote control for the Gear 360. While you can switch between the photo, video, time lapse, and video looping modes right on the device, Samsung’s app also offers more granular controls, such as the ability to capture photos or videos through a particular lens. Other editing options include white balance, enabling high-dynamic range (HDR), and adjusting exposure, image size, timer, duration, and recording time. 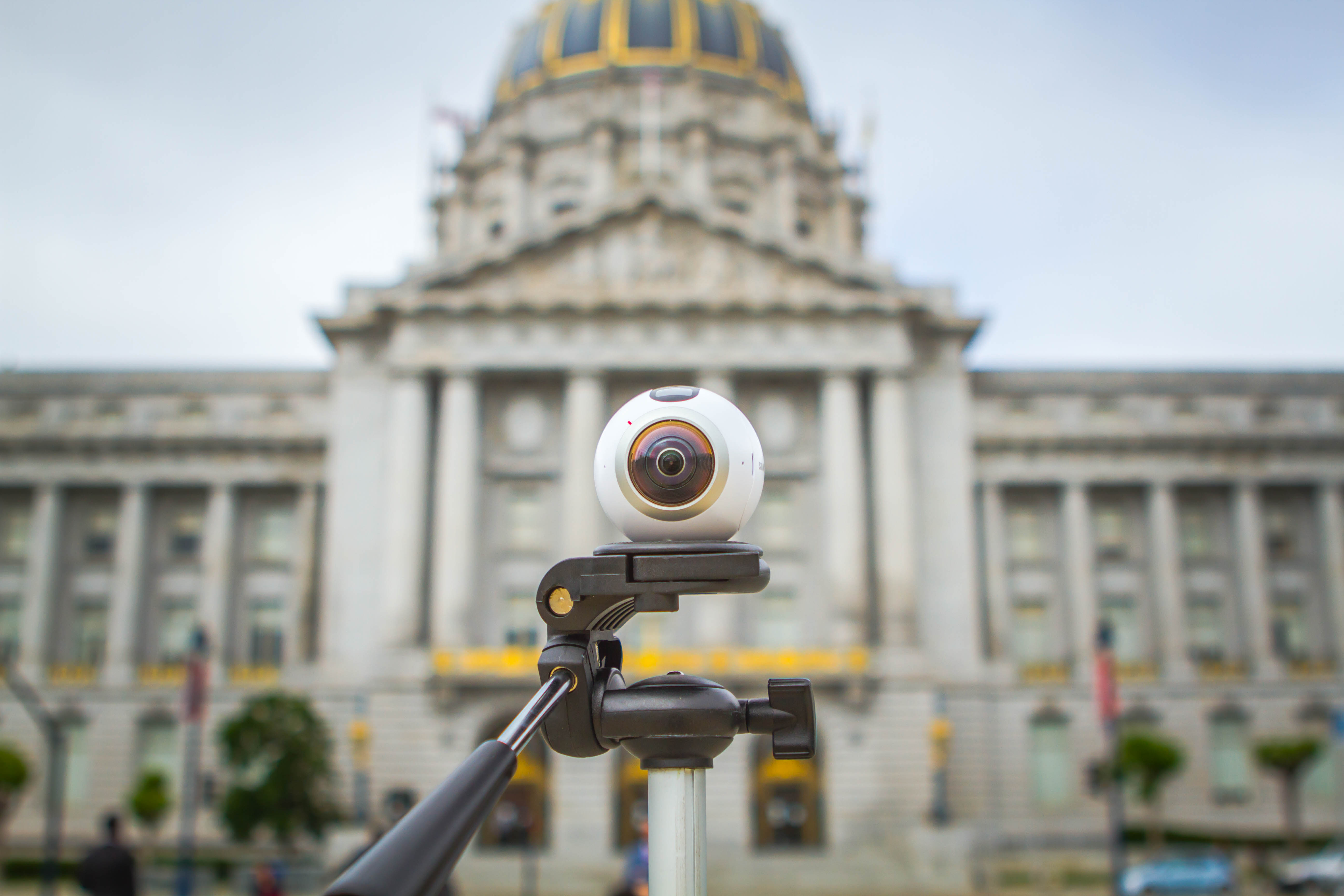 Above: The Samsung Gear 360 has a universal mount so it can be attached to a tripod, monopod, or anything else.

You can also enable auto-corrected angles, adjust the ISO sensitivity limit, turn on “windcut” to remove wind noise from recorded videos, resize pictures in the app, add a logo to the media, and more.

Of course there are limitations. Motion control only works in modes that rely on both of the Gear 360 lenses. If you’re taking a time lapse video, the app disables live preview. The device doesn’t have any way to take nighttime photos or videos — you’ll need lighting equipment to capture the night effects. And the lenses cannot zoom in or out.

Photos and videos can be saved directly onto your phone or shared to Facebook, Flickr, YouTube, Dropbox, Instagram, or YouTube. Samsung will ask if you want to uploaded videos to be the original or the compressed version. Of course, it’s best to upload these files only when you have Wi-Fi, as the potentially huge files will likely cause you to exceed your data usage.

Gallery: Close up with the Samsung Gear 360 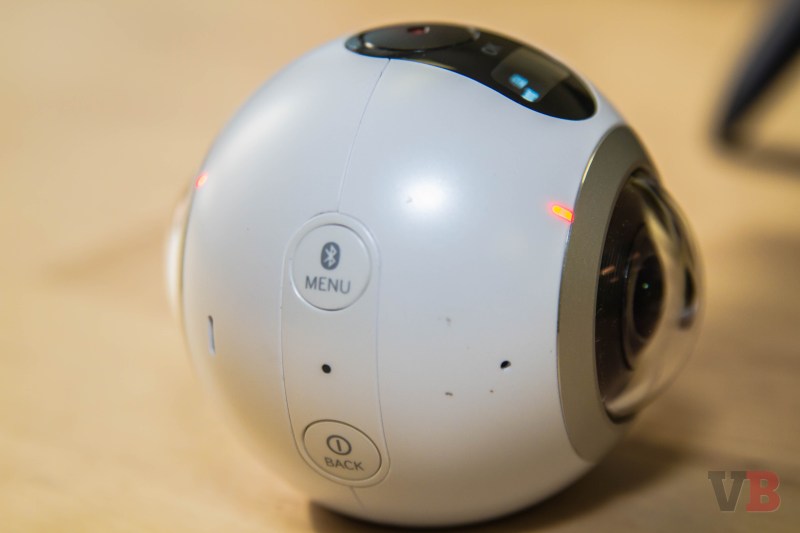 Above: Buttons on the side of the Samsung Gear 360.

If you want to access files without an internet connection, you can save them to your phone, but you’ll quickly run out of storage capacity. Another option is to download all of the files off of the Gear 360 memory card to your computer.

Samsung promises that with a fully charged 1,350 mAh battery, you’ll get approximately two hours of power. With my usage, that seemed pretty accurate. The Gear 360 can be charged with a microUSB connector.

While testing the Gear 360, I encountered some motion issues relating to how the device is held. If you record video while holding it so the mount is parallel to the ground, when you try to pan around afterwards using your finger, the process is not smooth.

This issue doesn’t appear to occur with photos — just videos. Maybe it has something to do with the gyroscope sensor in the device, but it would be helpful if the Gear 360 always knew which way is up, regardless of how the device is angled.

When the Gear 360 was introduced in February, Samsung touted software that would automatically blur the edges of all photos and videos so that the assembled final version would be seamless. This sounds great, but in my usage, edge lines were still plenty visible.

Be that as it may, for a device that’s fairly inexpensive, it’s tough to get really upset about a few edge lines. If you’re looking for an absolutely perfect creation, it’s probably worth spending money on the Lytro Immerge, Nokia’s Ozo, or GoPro’s spherical camera rig. Hopefully, Samsung will improve its software and firmware on the device over time.

Advanced editing tools for a few

The Samsung Gear 360 app provides you with standard editing controls, but if you fancy yourself an advanced production editor, there is a desktop solution for you: Samsung Gear 360 Action Director.

Above: Screenshot of Samsung Gear 360 Action Director, an application you can use to make advanced edits to your photos and videos.

This desktop app is only available for Windows PCs and requires a Gear 360 serial number to activate it. Powered by CyberLink, the tool lets you add music, transitions, titles, and more advanced editing features to your 360 video. How many people will actually use this app is unclear; it’s likely most people will just capture photos and videos with the Gear 360 and share them right away through the mobile app, skipping the post-production work.

Samsung wants to create a connected ecosystem with all of its products and, as a result, only select smartphone models are currently compatible with the Gear 360. If you have the Samsung Galaxy Note7, S7, S7 edge, S6, S6 edge, S6 edge+, or the Note5, you’ll be able to install the associated mobile app. If not, you can still use the device, but it may require a bit more maneuvering to make certain adjustments.

The limited smartphone compatibility may be a turnoff for some people, including those who prefer iOS. Other similar products have platform-agnostic smartphone apps, which may give them a leg up on the Gear 360.

Nowadays, anyone can create within this new media format, and services are clamoring for creators. Just as YouTube has its video stars, companies are seeing what can be done with 360-degree content, especially since it’s tied in with virtual reality. 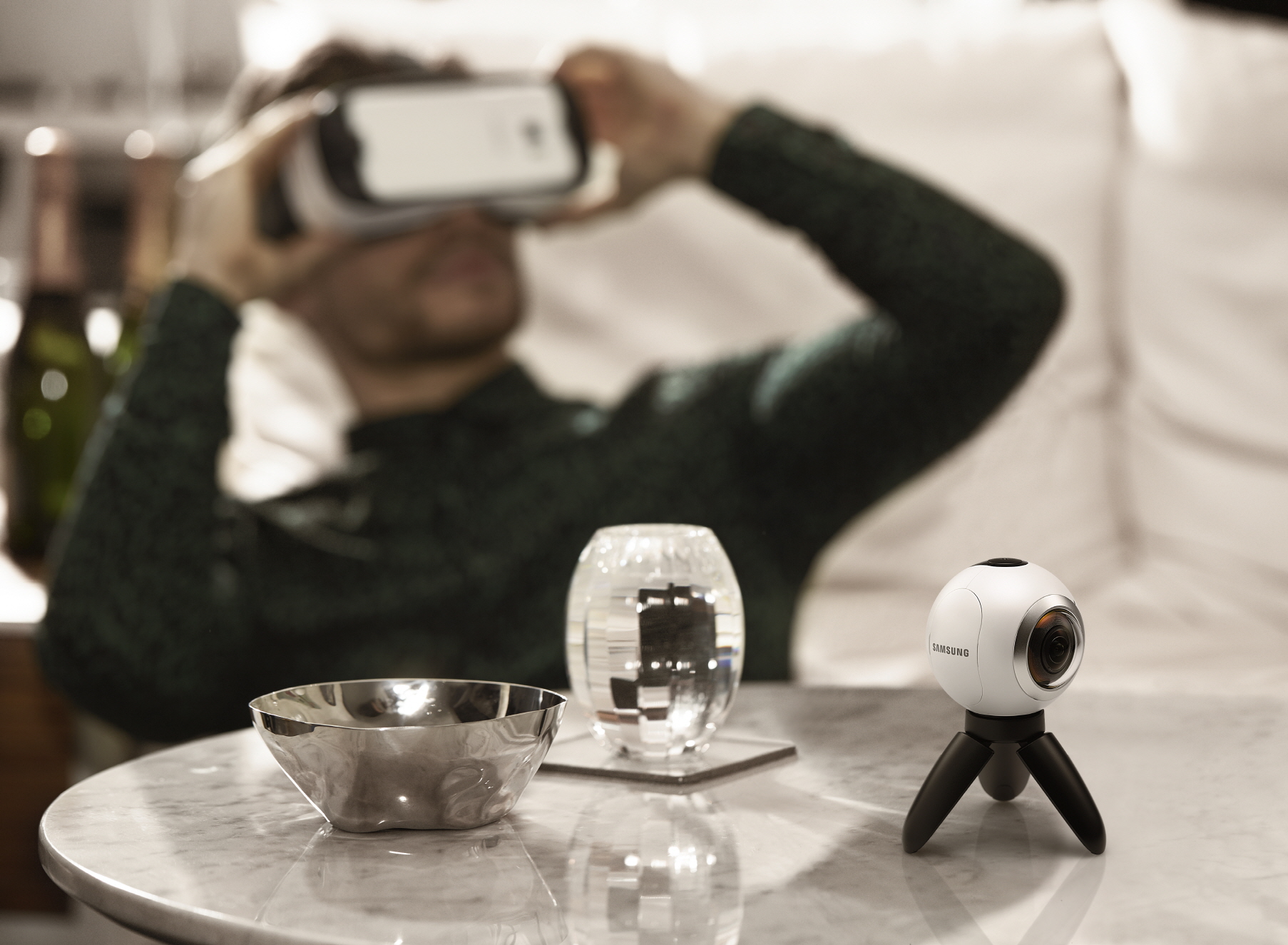 Samsung is working overtime to remain competitive against Google, Facebook’s Oculus, and many others. Combined with the success of Samsung’s smartphone business, the Gear 360 acts as a gateway to help realize that potential and advance company’s mission. Beyond simply having mobile and desktop apps, Samsung recently launched an official program aimed at filmmakers, encouraging them to leverage its technology to produce VR movies. It has also rebranded Samsung Milk VR into a one-stop portal and marketplace for all VR films and shows.

The company is waiting intently to see not only how the Gear 360 is adopted, but what people do with it. 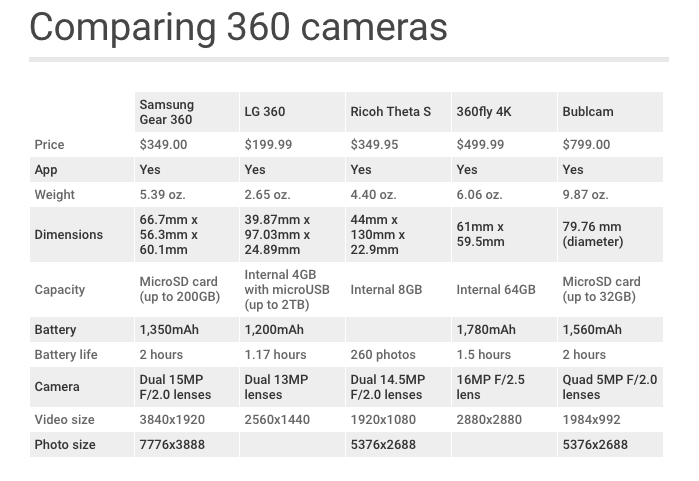 Above: Comparing specifications for some of the 360-degree cameras on the market.

So here’s the real question: Should you get the Gear 360? At $350, it’s not the most expensive camera of the bunch, and it offers decent-quality photos and videos. If you don’t care that you can’t easily pocket the camera and are fine with the Samsung ecosystem, then yes, you should buy this device.

I was disappointed that a “wow” moment never materialized, even though it’s still a first-generation device. But since we’re talking about Samsung, there are plenty of resources that can be thrown at improving the Gear 360 in the future.

You can purchase the Gear 360 starting August 19 through select online retailers, although Samsung hasn’t disclosed specific details at this time. Previously, limited quantities were sold during VidCon and Lollapalooza.