Nvidia announced today it will soon ship laptop graphics chips that will have a 76 performance boost over the previous generation and be able to run virtual reality applications on a notebook computer.

That could give a boost to PC-based VR sales. Overall, VR is expected to become a $30 billion industry by 2020, according to Digi-Capital. But in 2016, VR-based PCs are still a fairly expensive proposition for consumers. Nvidia believes its new graphics chips will help drive affordability, as well as mobility, for VR systems.

The Santa Clara, Calif.-based chip maker made the announcement on the eve of the Gamescom event in Germany, where hundreds of thousands of gamers will gather in Cologne. Nvidia said the new chips will help accelerate the renaissance of PC gaming notebooks, which have sold 20 million units in the past 3.5 years and are expected to grow at a rate of 30 percent compared to a year ago, based on Nvidia’s own numbers.

“This is big news that will get a lot of gamers excited,” said Mark Aevermann, the product team leader for GeForce GTX notebooks at Nvidia, in a press briefing. The chips are called the GeForce GTX 10 Series GPUs (graphics processing units). “This is truly the largest launch we’ve ever had. We have the most OEMs (original equipment manufacturers) that we have ever had” for a notebook series. 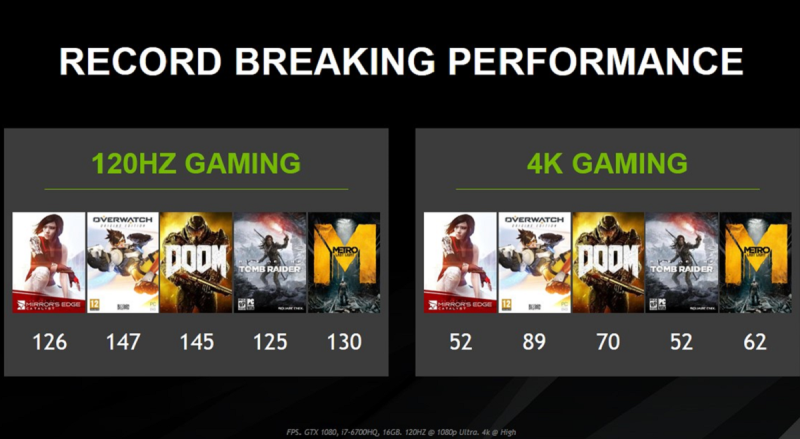 Above: The GeForce GTX 10 Series chips can run games at high frame rates.

Laptops based on the system will cost as little as $1,300. They will be as light as four pounds and as thin as 18 millimeters. The systems have 30 percent better battery life on Pascal compared to the previous generation of Maxwell chips. The Pascal chips are so power efficient that essentially the same chip

Aevermann said that gaming laptops are selling at a faster rate than the consoles. For instance, Sony has sold 52 million PlayStation 4 consoles to date, with year-over-year sales up 4 percent from a year ago, while Microsoft has sold 29 million Xbox Ones to date, with year-over-year sales down 4 percent from a year ago. Nvidia says it has about 90 percent of the graphics chip market for game notebooks.

“It shows you how prevalent gaming notebooks have become as a platform,” Aevermann said.

The chips can support games running at 120 hertz, or 120 frames per second. They can also run 4K graphics if you run the games at slower rates.

“It’s up to four times faster than the fastest game console,” Aevermann said.

The 10 Series chips will be overclockable, up to 300 megahertz higher than rated. It will also support G-Sync monitors, including the first-ever 120-hertz displays and the first 25 x 14 displays. Nvidia has 30 games in development that are using its VR Works technology. Those games include Raw Data and Pool Nation.

We will see inexpensive notebooks based on thin-and-light designs as well as performance beasts. The 10 Series are available now, at a range of prices. Nvidia did not disclose the prices, except to note that systems based on the chips will be available for as low as $1,300. 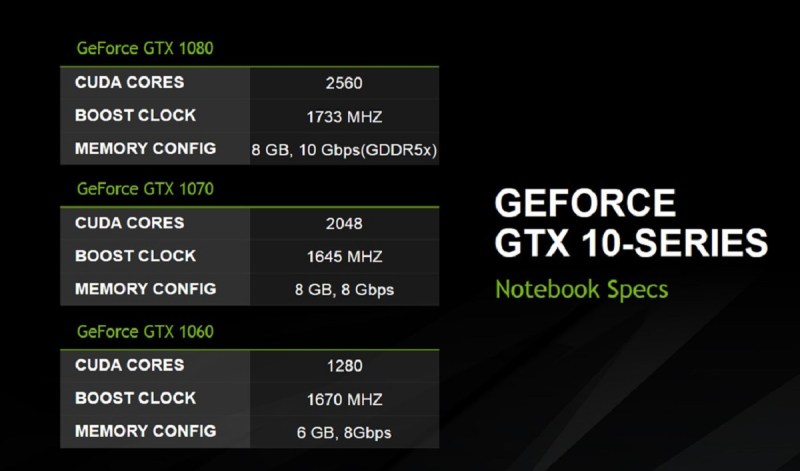 Above: Nvidia’s 10 Series graphics chips are the same as desktop versions.