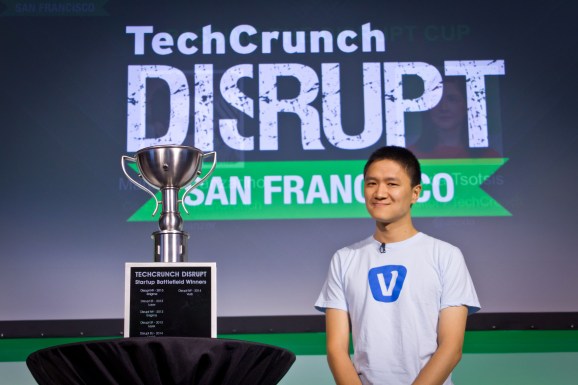 Vurb CEO Bobby Lo stands on stage at TechCrunch Disrupt San Francisco to pass the trophy on to the next winner of the startup pitch contest.

Snapchat is said to be in the late stages of acquiring mobile search and discovery app Vurb for $110 million.

According to The Information, the purchase of Vurb will give the ephemeral messaging app company more resources to bolster its messaging and search features. Sources told the publication that 75 percent of the price tag would be in stock and the rest in cash. Snapchat is also said to be extremely interested in Vurb founder Bobby Lo, a serial entrepreneur who previously founded the online marketing firm Yodle.

Founded in 2011, Vurb’s mission has been to “create a smarter, more connected mobile world that empowers people to do more of what they want all in one app.” It connects users with the “most relevant information and tools from apps and services” within a single interface. It’s likely that Snapchat wants to follow what Facebook has done with its messaging app and become more of a platform, allowing third-party apps to use its messaging capabilities and possibly increase event discoverability. The idea is that it gets more usage, and everyone is happy.

Curb currently connects apps like Yelp, Uber, Netflix, Fandango, Google Maps, Rotten Tomatoes, Metacritic, Foursquare, Tastemade, and others. “There are so many incredibly useful apps out there — but with over 1.5 million to choose from on Android or iPhone, it’s hard to know which ones to use or even that they exist,” Lo said in 2015.

The messaging aspect seemed to appeal to Snapchat, as Vurb added this capability last year.

One potential use case would be within Snapchat’s Discover section, which was updated a few months ago. As people share snaps from events like the Summer Olympics, the latest movie screening, a block party, or a political rally, the integration of Vurb’s technology could lead to more conversions.

Over the past five years, Vurb has raised $10 million in funding from a long list of investors including Tencent, Atlas Venture, Redpoint Ventures, CRV, CrunchFund, and noted angels, such as Marc Benioff, Max Levchin, Naval Ravikant, Brad Garlinghouse, Drew Houston, and Jim Lanzone.

We’ve reached out to Snapchat and Vurb for comment and will update if we hear back.

Update as of 9:49 a.m. Pacific on Tuesday: Snapchat declined to comment.