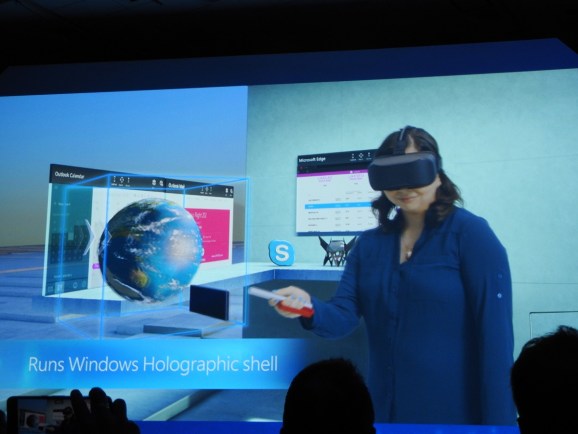 Intel and Microsoft are teaming up on an augmented reality technology based on Microsoft’s HoloLens headsets.

Next year, Microsoft will release the Windows Holographic Shell as part of an update to all Windows 10 PCs. That will enable Windows users to use Microsoft’s augmented reality headset, Microsoft HoloLens.

Microsoft has released a developer version of HoloLens for a few thousand dollars. The two companies are working together on a common mixed reality specification so that Microsoft’s holographic technology works with Intel’s own virtual reality headset project, dubbed Project Alloy. Version 1 will be out in December 2016 at Microsoft’s WinHec event in China.

Intel will open-source the Project Alloy hardware in the second half of 2017. That means anyone can take the Alloy hardware, combine it with Windows Holographic, and get a product to market, said Intel CEO Brian Krzanic today at the Intel Developer Forum in San Francisco.

“This puts the power of virtual reality into the hands of the developer,” Krzanich said.

Terry Myerson, executive vice president at Microsoft, said on stage at IDF 2016  that the goal of the specs is to enable a wide range of partners to create compatible hardware products that hit mainstream consumer markets.

“We will be releasing an update to Windows 10, which will enable mainstream PCs to run the Windows Holographic shell and associated mixed reality and universal Windows applications,” Myerson said in a post. “The Windows Holographic shell enables an entirely new experience for multi-tasking in mixed reality, blending 2D and 3D apps at the same time, while supporting a broad range of 6 degrees of freedom devices.”