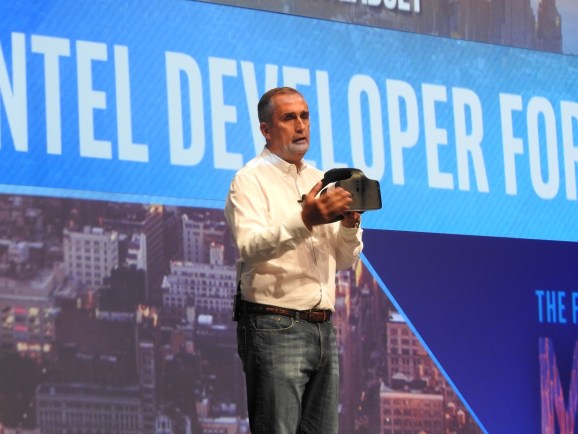 Project Alloy has compute, graphics, batteries, and sensors self-contained in one package — you don’t need to connect it to a computer. It has Intel RealSense cameras built-in, sensing the environment so that you won’t run into anything.

Normally, VR headsets such as the Oculus Rift and HTC Vive require you to connect a wire from the headset to the PC. This new headset is bulky, but you don’t need to wire it to anything. It can connect wirelessly, and you can move around an environment using what Intel calls “room to room tracking.” You can also see your hands inside the virtual world and pick up things.

Speaking at the Intel Developer Forum in San Francisco, Krzanich said, “We can take the virtual world into the real world. You can interact with the virtual world. We believe the capabilities Alloy introduces is truly significant.”

The project is still in the works, and Krzanich hasn’t said how soon it will ship.

Tim Merel, who is not only the founders of Eyetouch Reality and the tech adviser Digi-Capital but also a noted follower of virtual reality, believes that Project Alloy has the potential to make it a leader in VR.

“Intel’s Project Alloy is a logical step for the VR/AR industry and for Intel. Mobility is a key driver for both VR and AR, which Alloy addresses by its untethered all-in-one approach. Positional tracking is a key driver of user experience, so incorporating positional tracking and gesture control in a standalone headset adds another building block,” Merel said. “Finally incorporating Windows Holographic OS removes a level of complexity for developers as they work across multiple platforms. As Digi-Capital forecasts $120 billion ($30 billion VR, $90 billion AR) for the AR/VR market by 2020, Intel is positioning itself as a leader in the next platform change after mobile.”

Intel will open-source the Project Alloy hardware in the second half of 2017. That means anyone can take the Alloy hardware, combine it with Windows Holographic, and get a product to market, he said.

“This puts the power of virtual reality into the hands of the developer,” Krzanich said.