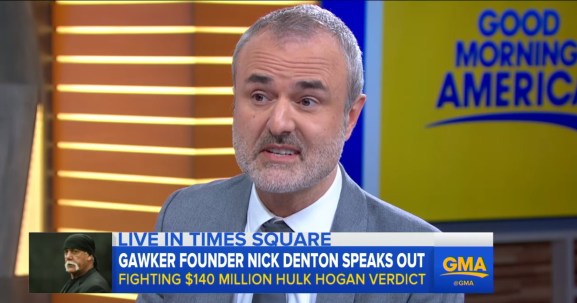 (Reuters) — Univision won a bankruptcy auction on Tuesday to acquire U.S. internet publisher Gawker Media for $135 million, outbidding media company Ziff Davis, which had made an initial offer of $90 million.

Univision’s winning bid for Gawker, which will go before a U.S. bankruptcy judge on Thursday, shows how the U.S. Spanish-language broadcaster is seeking to expand its digital media properties and is not shying away from a news brand that has often courted controversy to build a cult readership.

Univision was the only challenger to Ziff Davis, whose stalking horse bid had set the floor for others in the auction.

An investment banker representing Gawker said in court last month that he had a list of 40 potential buyers he planned to market the company to.

Gawker founder Nick Denton said in a prepared statement that the company “could not have picked an acquirer more devoted to vibrant journalism.”

“I am pleased that our employees are protected and will continue their work under new ownership — disentangled from the legal campaign against the company,” he said.

Ziff Davis decided to withdraw once it “felt the price and terms exceeded [its] threshold,” according to an internal memo from Chief Executive Vivek Shah. Univision offered no immediate comment.

Gawker sought bankruptcy in June after facing a $140 million court judgment following an invasion of privacy lawsuit from former professional wrestler Hulk Hogan over the publication of excerpts from a sex tape.

Denton filed for personal bankruptcy this month to also seek protection from the judgment. Ziff Davis had agreed to bring him on as a consultant were it to have bought Gawker. Denton’s future at Gawker with Univision as the owner is now uncertain.

Hogan’s lawsuit was bankrolled by billionaire investor Peter Thiel, an early backer of Facebook Inc and a co-founder of PayPal. Gawker in 2007 had published an article about Thiel’s homosexuality.

Gawker and Denton were influential forces in the growth of online media, developing a direct, conversational and sometimes-slashing style that dispensed with many journalistic conventions and was widely imitated.

Its eagerness to dish salacious gossip was often condemned, but it was also one of the few early digital publishers to build a profitable independent business.

Univision owns a Spanish-language broadcast network that sometimes beats English language U.S. broadcasters such as NBC in the primetime ratings race. It also owns another broadcast channel called UniMas, as well as several cable networks and a stable of Spanish radio stations.

Univision, like many other media companies, has been aggressively courting millennial audiences. In 2013, it launched English-language TV network and website Fusion with Disney to target millennials across cultures, and earlier this year it acquired a minority stake in satirical web publisher Onion Inc.