SuperAwesome‘s PopJam has been a hit in the United Kingdom, where it has more than a million kids using it. Now the social app for children is debuting in the United States.

The app is part of London-based SuperAwesome’s plan to become the biggest digital brand platform for kids in the world. It is targeted at ages 7 to 12, and the users spend an average of 45 minutes a day on the service.

Despite the fraught nature of aiming for children under 13, the company says its app is safe to use because of technology it uses to make sure that Internet predators stay off the platform. Content creators can use the platform to engage and entertain the younger generation without redirecting them into adult social networks.

PopJam’s rapid growth comes as kids’ content owners, brands, and YouTube personalities started adopting the app as their default under-13 social platform. Over a hundred official channels have been created in the U.K., with millions of pieces of content posted every day from household names such as Disney, Nintendo, Hasbro, Penguin, Roald Dahl, Guinness World Records, NBCUniversal, and Lonely Planet Kids.

PopJam is designed for the under-13 audience, allowing kids to share artwork and interact with their favorite creators in a positive, safe environment. The app is certified COPPA-compliant, meaning it meets U.S. legal standards for kids on the internet. PopJam does not allow any private messaging between users. Instead, positive and responsible user behavior is incentivized with virtual rewards and call-outs in the app.

Paul Nunn, SuperAwesome’s chief commercial officer, said in a statement, “PopJam is a truly unique platform for kids to engage creatively with their favourite creators in a safe environment; following the huge popularity of the app amongst brands, content creators and kids, we are both delighted and confident that PopJam will create a fantastic impact in the US market and attract many more partners and fans.”

Chris Massey, senior vice president of digital marketing at NBCUniversal, said in a statement, “With a core audience of 8-12 year olds, PopJam was the perfect channel to promote ‘The Secret Life of Pets’. Kids reacted and interacted with our posts and sticker packs, produced hilarious fan art, and gave us very encouraging feedback on the movie. To be able to get this kind of engagement from an under-13 audience in a safe, moderated environment is truly unique.” 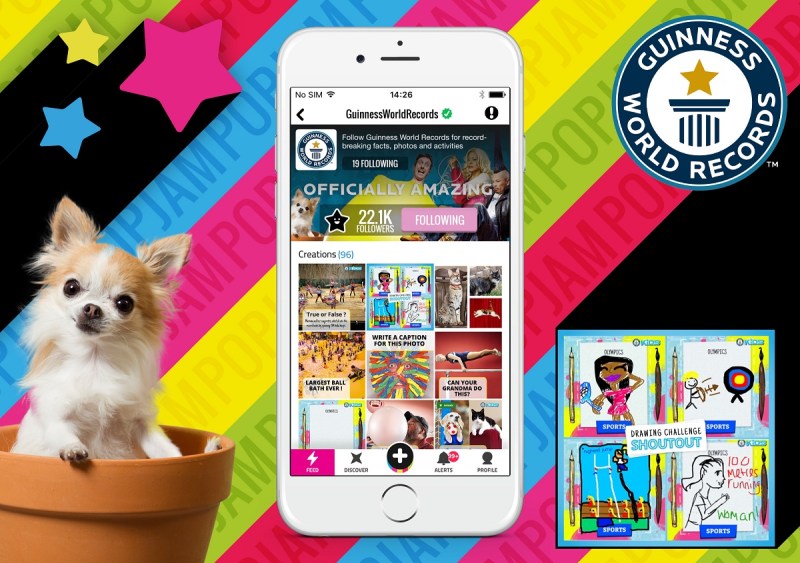 Above: PopJam is launching in the U.S.