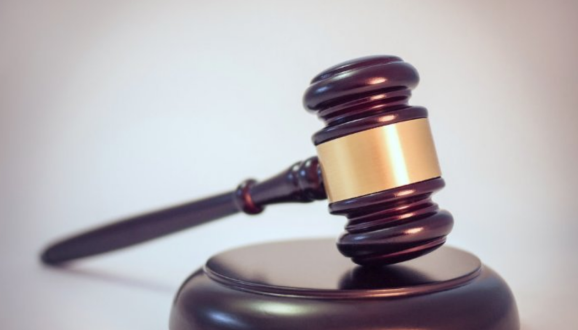 Auction gavel, or hammer of justice?

Univision is acquiring Gawker Media for $135 million, news reports confirmed this week, beating out Ziff Davis in an auction for the media company’s assets.

Nick Denton founded Gawker in 2002, after selling an early news aggregation site he started, Moreover, and before that a social networking forum, First Tuesday. Those two sales gave him the stake he needed to create a media company of his own: A nice development for a former reporter.

What he understood, early on, was how well-suited the blog format could be to a modern news site. Denton was smart enough to pursue a portfolio strategy, rather than try to be all things to all people: Each site had its focus and its audience. Gizmodo became the go-to site for aggressively sourced and intelligently explained gadget news. Gawker.com took off as a gossipy take on New York media and assorted celebrities.  Valleywag was the on-again, off-again Gawker-style gossip rag for Silicon Valley. Other sites, like Kotaku, Lifehacker, and Jalopnik, pursued their own verticals. In each case, Denton tended to hire independent-minded editors, give them a lot of autonomy, and let them burn themselves out in a frenzy of furious blogging. Turnover was high but many of the early Gawker writers and editors went on to terrific careers in more traditional media, or in more stable startups.

Denton also brought a distinctly British tabloid sensibility to his media company. Some of the things Gawker did, like paying sources for access to juicy stories (like the iPhone 4), are considered distasteful by professional journalists in the U.S. Other things Gawker did, like outing people’s sexuality or publishing their private sex tapes, are considered beyond the pale by almost everyone. But Gawker’s M.O. was consistent: If someone famous was doing it, it was news, and therefore worth posting.

It’s that latter part that got Gawker, and Denton, in trouble. After publishing a Hulk Hogan sex video, the pro wrestling star sued the company, eventually winning a $140 million judgment. It turned out along the way that Hogan’s lawsuit was funded by Peter Thiel, the billionaire cofounder of PayPal, who had been outed by Valleywag writer Owen Thomas in 2007.

Univision’s offer is coincidentally almost exactly equal to that $140M judgment, but that’s just happenstance. Because Gawker filed for bankruptcy, the money from the transaction will remain in escrow until all appeals and adjustments to the award have been settled. Secured creditors will get their money first, and then Hogan will get his payout. Plus, other legal actions (also funded by Thiel) are still pending. Univision is buying this company knowing that it may have to shell out more cash to settle its legal bills, and presumably it’s well prepared.

Update: Jason Calacanis tells me that Univision is buying Gawker’s assets but is probably shielded from the lawsuits, thanks to the bankruptcy. I appreciate the clarification.

Meanwhile, it emerged that Denton was not just savvy about setting up the journalistic structure of his company: He has also been very smart about its financial structure. Through a series of holding companies he’s managed to transfer a good part of Gawker’s profits offshore, to the Cayman Islands and to Hungary, and he and his family have already extracted some of that money, probably caching it in places where it will be inaccessible to the U.S. courts. Surely he will take a big financial hit, but chances are good that he’ll still be rich when the shouting is over and the sweepers are cleaning up the mess.

In full disclosure: I know Denton a little bit and I like him. In person he’s warm, intelligent, and funny. I interviewed for a job running Valleywag many years ago but wound up going to work at Wired instead (luckily I think).

There are many potential takeaways from all this, but I will focus on just a few.

Gawker Media’s websites haven’t been destroyed. Arguably, they’re in a better position than ever, as they are now owned by a giant media corporation with the ability to support them and defend them. They might get a little more circumspect now that they have a legal department overseeing things. But they’ll also be paired with Univision’s other properties, like Fusion, which is smart but has struggled to find an audience. That should be good for both sides.

Update: Well, Gawker.com itself is shutting down. Apparently Univision wants nothing to do with it. But the other sites live on.

A great media brand and a great media business are not the same thing. Gawker did pretty well, with $200 million in revenue and $59 million in profit from 2010 to 2015, according to the Fortune report. Nice, and enough to support Denton’s New York lifestyle. Still, compared to the tech companies it writes about, $12 million in profit a year is not that big of a deal. Compare that to its traffic, which is verifiably terrific. (Denton has always made a practice of publishing traffic numbers openly.) What this sale does is separate a great brand from a decent business, and (with luck) will install that brand inside a larger, more capable business. Other media brands might want to take note. 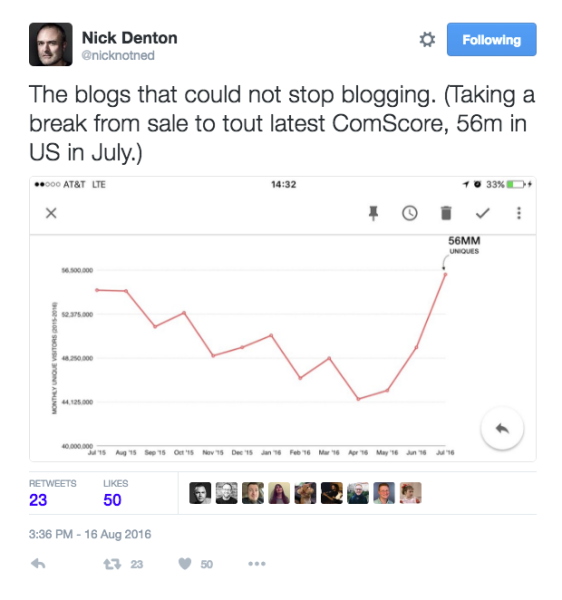 Above: Gawker web traffic leading up to its sale at bankruptcy.

Denton used every trick in the mogul’s book: Overseas holding companies, a portfolio strategy, strategic bankruptcy. Although he did it on a smaller scale than, say, Rupert Murdoch or Donald Trump, he played the game well. I daresay that is one of the reasons Gawker survived as long as it did.

Thiel’s vengeful funding of a lawsuit against Gawker worries all of us who publish things online. What if someone is offended by what we write? What if that someone is a billionaire who decides to try and sue us out of business? This is a scary proposition, and I don’t want to make light of it. But it’s probably not a harbinger of things to come. It’s telling that Mother Jones has faced a similar situation, and won, thanks to the solidity of its reporting and the tenacity of its lawyers. It’s probably hard to mount a very convincing defense of publishing someone’s sex tapes; publishing a detailed, factual account of what it’s like to work inside a for-profit prison is much more defensible in U.S. libel law. That said, if you want to publish things that might attract controversy like this, buy libel insurance.