Facebook Messenger product manager Seth Rosenberg announced Monday that in addition to removing a ban on marketing via Messenger, certain businesses — news outlets among them — can now launch subscription bots to regularly share their content.

Fox News, Wall Street Journal, and CNN are among the news outlets that have started sending subscription messages, a Facebook spokesperson told VentureBeat. 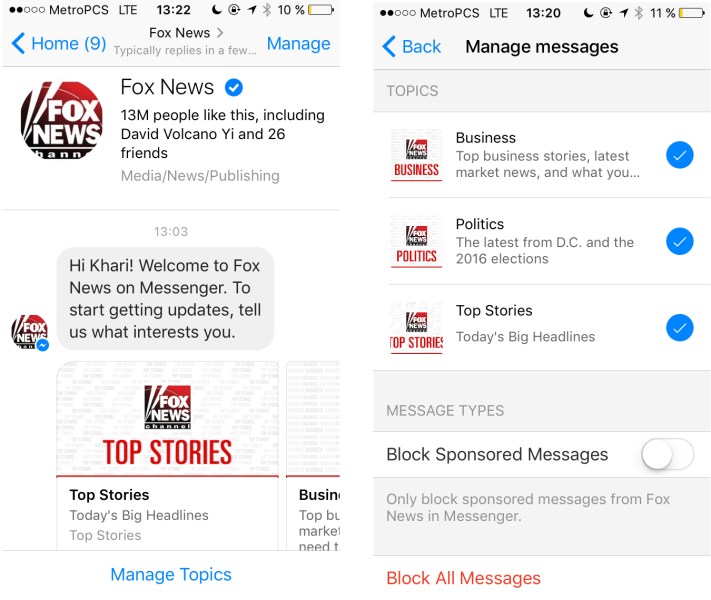 Above: Screenshots of Fox News Facebook Messenger bot on iOS.

While the subscription feature isn’t a finished product (in beta), the Fox News bot gives us a glimpse into what subscription bots on Messenger can look like.

Perhaps the biggest difference: You cannot send messages to the Fox News bot. You can only choose to receive news, based on topics like top stories, politics, and business.

And unlike other bots, when you choose to manage messages with a subscription bot, topics can be added or removed by choosing the Manage option in the top right-hand corner or by choosing Manage Topics at the bottom of the screen where you typically send messages.

Cancelling a bot subscription is as simple as deleting a conversation. You can also block sponsored messages or block all messages.

Fox News is the most popular cable news channel in the United States. The Fox News bot can be accessed by going to the Fox News Facebook page, which has 13 million fans.