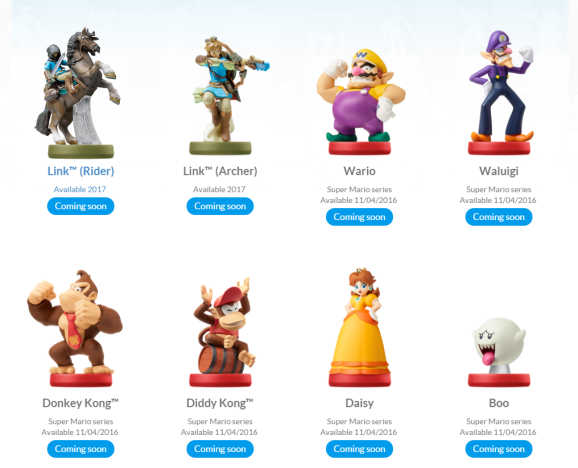 Nintendo's Amiibo are losing some steam.

The interactive-gaming toy market is contracting, and Nintendo and Activision are feeling it more than the competition.

Spending on gaming-related accessories, which includes interactive toys — those plastic action figures like Skylanders, Amiibo, and Lego Dimensions that connect wirelessly to compatible video games — was down 5 percent year-over-year to $117.1 million in July, according to industry-tracking firm The NPD Group. And while Disney shook up the industry by exiting this space when it canceled its Infinity product, consumers are shaking it up by spending less on the figures from Nintendo and Activision and more on Warner Bros./Lego and … Disney.

The success of Lego Dimension is largely due to the wide variety of properties built into the experience. As movies like Ghostbusters and the DC Comics film Suicide Squad hit theaters, fans can turn to Lego Dimension to find toys and a game that are at least tangentially related to something they’re excited about.

When it comes to Disney, however, this surge in spending comes well after the cancellation of Infinity. That may seem odd, but the likely answer here is that retailers are discounting and selling through their existing stock and that led to a run on the product — especially among collectors.

As for Skylanders, we’ll likely see a resurgence for that soon. Activision is planning Skylanders: Imaginators for PlayStation 4, Xbox One, Wii U, and more in October.

Nintendo, meanwhile, did release new Amiibo in July from its Splatoon shooter, but that wasn’t enough to fight off Lego and Disney. Moving forward, new Amiibo will launch in November.