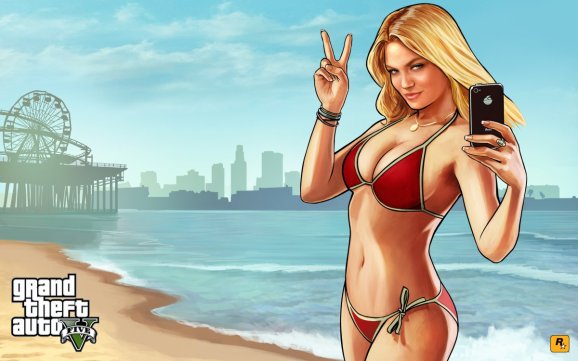 Grand Theft Auto V doesn't even know how to stop.

It’s a hot summer, and that has plenty of people indoors playing favorites like Overwatch and Grand Theft Auto V. But a lack of new video game releases is preventing people from plunking down any serious cash on new hardware or software.

Here are the U.S. revenues for new products sold at retail and through digital stores for NPD’s participating publishers. Console numbers include portable and sales from PlayStation Network and Xbox Live. PC is physical game sales and Steam digital download sales.

The NPD’s monthly report is only a snapshot of a wider industry, but it’s one that informs decisions at a number of the most important publishers in the world. Once again, it has revealed that people are spending less on gaming in the U.S.

Hardware was hit particularly hard, according to Naji.

That increase in spending on handhelds was due to a price drop for Nintendo’s 2DS and the launch of Monster Hunter: Generations. That increased spending on Nintendo handheld hardware by 44 percent to $28 million.

“The best-selling new release for the month was Monster Hunter: Generations for the 3DS; but that sold 52 percent fewer dollars than last July’s new game, Rory Mcllory PGA Tour, which released for the PS4 and Xbox One,” said Naji. “The lack of strong new releases for the month resulted in a poorer comparison year-on-year, and the top 10 games for July 2016 generated 21 percent fewer dollar sales than they did last year.”

And when it comes to accessories, the industry experienced more across-the-board dips.

“There were declines in spending among the top-selling accessory types,” said Naji. “Consumers spent less on gamepads, headphones/headsets, and on interactive-gaming toys versus last July. This resulted in the total spend on accessories declining by 4 percent to $98 million.”

Now, on to the software chart.

*Battle.net sales not included in Overwatch results.
**No digital sales for this title.

Monster Hunter: Generations is the only July release on this list, and it benefited from Nintendo dropping the price of the 2DS. But that wasn’t enough to over come the late-June debut of Lego Star Wars: The Force Awakens, which did well through July.

Outside of those two games, the rest of this chart is a bunch of returning champions.

Grand Theft Auto V, a game that originally debuted in 2013, continues to dominate the charts. GTA III and GTA IV both had similar best-selling streaks, but it’s impressive that the franchise hasn’t lost that appeal. The same is true for Call of Duty: Black Ops III and NBA 2K16, which are both getting ready to launch its next game in their franchises in just a few months.

When it comes to 2016 releases, Overwatch has established itself as a force alongside Doom and even Rainbow Six: Siege.

And, of course, Minecraft maintains its grip on a place in the top 10.

Xbox One was the top-selling home console in July, according to NPD. That breaks a streak for the Sony’s PlayStation 4.

“The average price of the Xbox One fell by 30 percent compared to July’15; this helped the platform become the best-selling [current-generation] console in terms of units sold for the month,” said Naji.

But the Nintendo 3DS was actually the overall best-seller when you factor in handhelds.

Despite the PlayStation 4 slipping into third-place overall for the month, Sony will likely strike back hard soon when it unveils the PlayStation 4 Neo and, potentially, a Slim PS4. Those new console revisions alongside some anticipated games should juice sales for that brand — although both Sony and Microsoft are powering a strong console generation already.

“After 33 months since the launches of the PS4 and the Xbox One, the combined cumulative hardware sales for these two consoles exceed the sales of their predecessors by 41 percent at the same point of their lifecycles,” said Naji.