Routers aren’t the most exciting tech product, but Netgear is trying to grab attention today for an innovation that will enable a router to more easily cover an entire home with fast internet access. The new product, Orbi, promises to get you all of the internet that you are paying for.

Netgear’s Orbi Wi-Fi System was built with recognition that your internet cable and computer aren’t always located in the center of your home. So the Orbi places one Wi-Fi unit where the internet comes into the home and another centrally to extend fast Wi-Fi access to more of the home. The full range that can be covered is about 4,000 square feet. That’s enough for a pretty big house and yard.

“High-speed internet is finally rolling out in a lot of homes, but you should be able to get full access to the speed that you are paying for,” said Sandeep Harpalani, senior director of product marketing for core networking at Netgear, in an interview with VentureBeat. “We are solving the fundamental issue of whether you are getting the fastest speed in your home.”

But Orbi isn’t simply a Wi-Fi extender, which you can get for relatively low cost. The $400 Orbi creates a dedicated channel between the base Orbi and the extended one, known as a satellite, so that you can get full internet access for devices that connect to the satellite Orbi unit. This could be very important for gamers, who often have game machines in dens or garages.

And it delivers maximum internet speeds no matter how many devices connect. That’s important, because the average broadband household has more than seven connected devices that can stream video, and emerging smart home devices are increasingly common, according to market researcher Parks Associates. BI Intelligence estimates that the average number of connected devices in a home will rise to 11 by 2019. As smart homes add security cameras and other devices, it’s easy to imagine many more devices in the home.

San Jose, Calif.-based Netgear designed Orbi to be easy for novice consumers to use. You can install it with just a few clicks using an app on a mobile device or an internet browser. Intended to act as a full-featured router, Orbi can plug into your gateway or modem. If you want to upgrade the Wi-Fi on your service provider gateway, simply plug Orbi into your existing gateway. It works on both 2.4 gigahertz and 5 gigahertz bands. And it delivers about 3 gigabits a second wireless speed using 802.11ac AC3000 Wi-Fi. 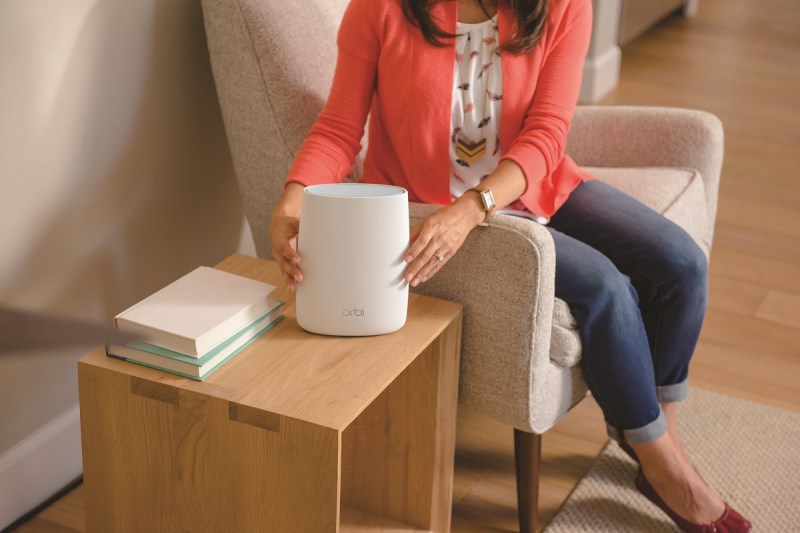 Above: Orbi satellite is easy to set up in the center of your home.

Orbi uses sophisticated Tri-band mesh network technology. The Tri-band Wi-Fi that powers Orbi includes a dedicated 1.7Gbps 5GHz band solely for extending internet speeds to Orbi satellites. This enables the other two Wi-Fi bands to be fully dedicated for all connected devices across an entire home. Tri-Band ensures that the Orbi Wi-Fi System provides both reliable coverage and maximum internet speed throughout your home.

“It looks at the best throughput on devices and delivers the best connection to you,” Harpalani said. “If you add more hops on a range extender, it slows down. Not with Orbi. We solve this with a third 5GHz radio.”

The Orbi Kit includes two devices, a base router and a satellite, that are pre-paired for easy setup. The range is relatively short, but there’s an indicator light on top of the Orbi that changes color to tell you if the satellite is within range of the base. Importantly, the Orbi satellite does not have to be in the line of sight of the base, and the signal can go through a wall or two. A blue indicator light at the top shows if the satellite is operating at full speed.

The result is that you can extend your high-speed Wi-Fi throughout the home, onto the patio, out to the pool, up to the attic, down to the basement, or into the garage. It effectively eliminates dead zones. Of course, this means that your Wi-Fi may extend to your neighbor’s house, so you have to make sure to use a password to protect your network.

“The connected home has become more data-hungry than ever, and video consumption is the primary driver,” says Brett Sappington, senior director of research at Parks Associates. “Consumers are streaming video to every available screen from an increasing number of over-the-top video service options. Consumers have come to expect ubiquitous, high-speed connections throughout the home and rely on Wi-Fi for the in-home connectivity and bandwidth that they need.”

Within the calendar year, Netgear will offer kits with more satellites for larger homes and will also make satellites available as add-ons for the Orbi System. Orbi has four Gigabit Ethernet ports and one USB 2.0 port each on the router and satellite. It works with features such as IPv6, Dynamic DNS, port forwarding, parental controls, and access point mode. The system can auto-maintain itself, and it works with security such as WPS-protected setup, 64/128 bit WEP, WPA/WPA-2 PSK, and WPA/WPA-2 Enterprise.

Orbi will be available as a kit in September at major retailers. Netgear, now in its 20th year, hopes that the Orbi will help it stand out in a competitive market. The company already has 50 percent market share for Wi-Fi range extenders. But range extenders often offer slower speeds. A single Orbi router, which covers 2,000 square feet, is available for $250. The stand-alone Orbi satellite (coming soon) will also sell for $250.

“This is a premium product, and a brand new market for us,” Harpalani said. 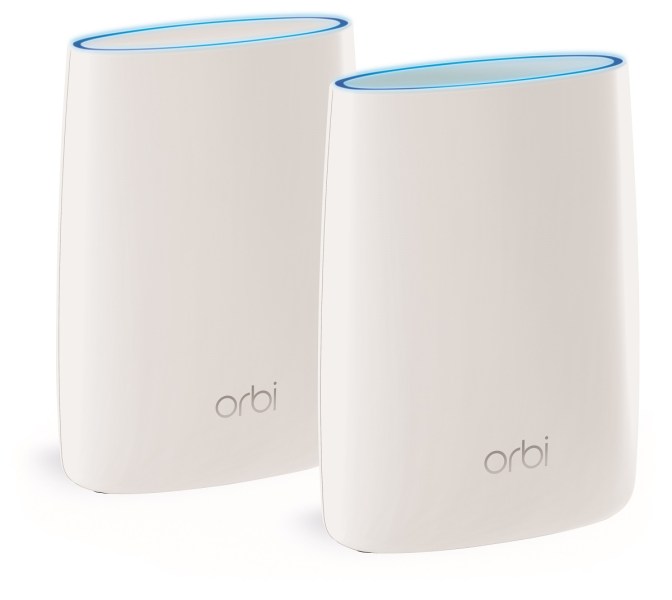