Plarium has collected more than 250 million players for its social, mobile and web games, including Stormfall and Soldiers Inc. Now it is launching a brand new intellectual property, dubbed Throne: Kingdom at War. It’s a massively multiplayer online mobile game set in the fictional Kingdom of Amaria, where players build their own towns and armies to battle against each other in clan-based warfare. 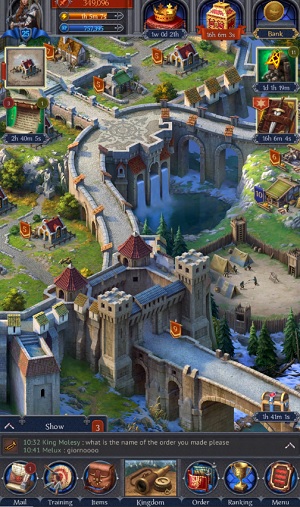 Above: Plarium’s Throne: Kingdom at War.

The title is the latest from Tel Aviv, Israel-based Plarium, which has grown to more than 1,000 employees. Very few companies can pull off the creation of a new intellectual property in the $36 billion mobile game industry.

The game launches today on Android and iOS, and you better get started soon if you want to take over the kingdom. You can team up with fellow Lords or go to war with them. The game is available in English, French, Spanish, Italian, German, and Russian.

The game is set in a kingdom where the old monarch Gerhard has died. You have to build your town, create your military, build your resource buildings, and then go to war. You can build armies with knights, spearmen, cavalry, siege units, scouts, and more. It has a very Game of Thrones feel to it, but Plarium says it’s an original story with both player-versus-player and player-versus-environment combat.

“We are excited to bring fans a rich strategy franchise that encompasses some of the most interesting medieval lore with our own unique spin on it,” says Avi Shalel, CEO of Plarium, in a statement. “We put a lot of an effort into bringing to life our own fictional version of the 13th to 15th centuries, and we provide every player with customization options to allow them to craft their own individual experience and gameplay style.”

The game has global tournaments where the winner is crowned king of the realm. You can increase or lose your reputation through combat or by amassing wealth. Players can capture resource locations and fend off attackers while gathering resources. You can participate in quests and errands.