With no console games charting, mobile brands dominate the leaderboard, featuring familiar names like Supercell, Machine Zone and King. Out of the 27 gaming brands that ran ads on national TV between July 16 and August 15, ads for mobile brands got the most attention online. 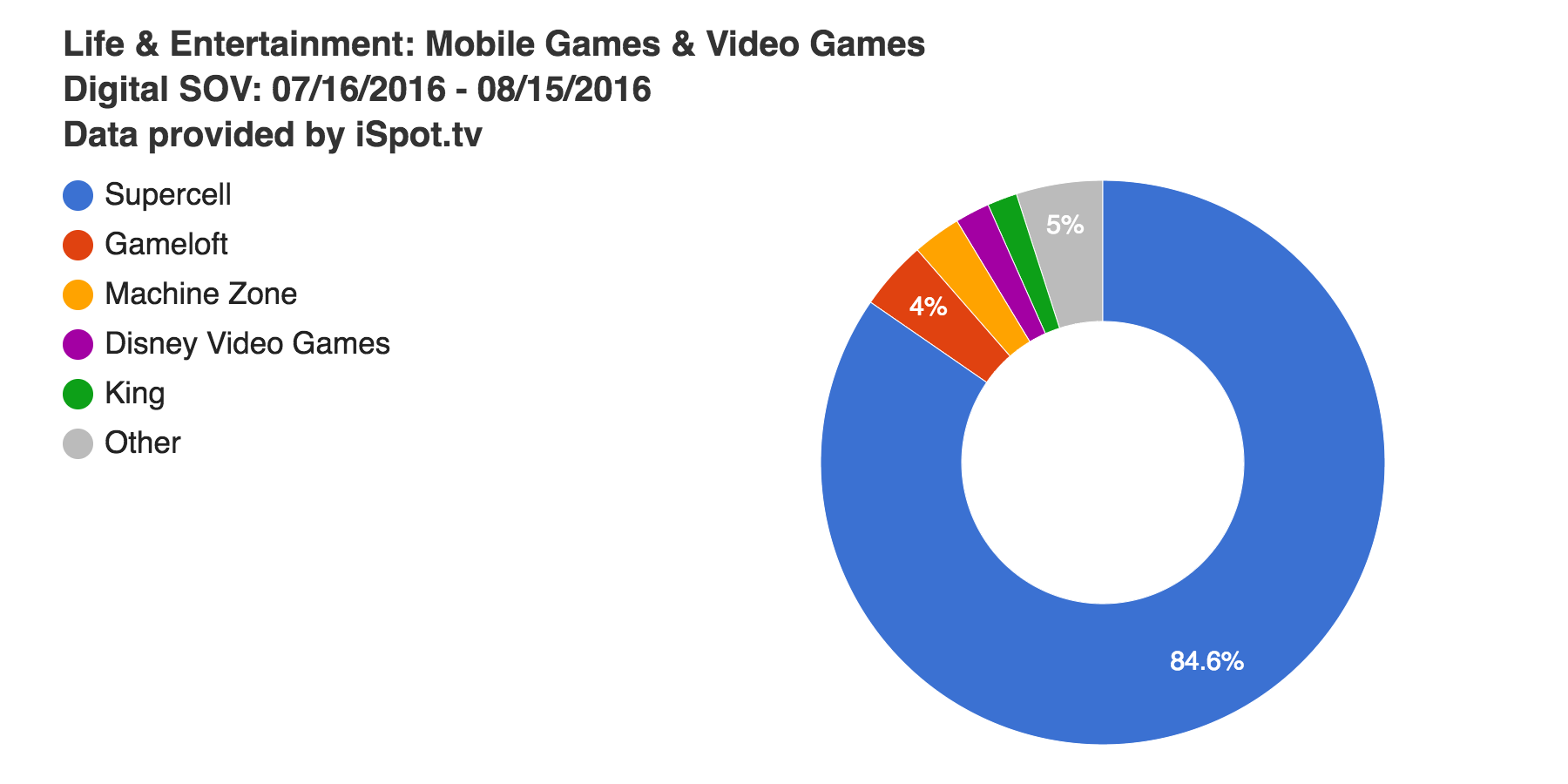 GamesBeat has partnered with iSpot.tv, which measures TV advertising in real-time, to bring you a monthly report on how gaming brands are spending their ad dollars and which are generating the most digital response. Below are the top five most engaging gaming industry brands over the last 30 days.

Gameloft joins the ranks for this period, promoting its racing game Asphalt 8: Airborne by aligning with Summer Olympic hype and dubbing the ad “Road to Rio.” While spending an estimated $200,000 on just under 200 airings, the brand managed to rack up 4 percent of the entire industry’s digital engagement. This is the result of the brand prioritizing car racing programming like IMSA Racing, Lucas Oil ASCS, and Full Custom Garage. “Road to Rio” received 8.1 million impressions on TV, got nearly 80,000 times online, and over 3,100 mentions in social posts.

Another frequent top spender, Machine Zone, once again returns to the charts, generating nearly 3 percent of the digital response for the industry. In total, the brand ran eight spots nearly 5,000 times during this 30-day period, grabbing 322 million impressions on TV and leading to over 28 million online views. The brand’s top ad, “Mobile Strike: Wall,” featuring Arnold Schwarzenegger, performed best during programming including The Daily Show with Trevor Noah and Catfish: The TV Show.

Clocking in with just under 2 percent of the industry’s digital response to TV ads, Disney Video Games returns to the chart supporting Disney Emoji Blitz! and Disney LOL. In total, the brand’s ads were viewed 135,000 times online, searched for nearly 12,000 times and were mentioned in nearly 2,000 social posts. The brand managed to pull these numbers with less than 0.01 percent of the industry’s total spend, primarily by running these spots on the parent brand’s networks. The most reacted-to spot, “Disney Emoji Blitz!: Game Face,” ran predominantly on Liv & Maddie and Jessie.

Finally, we close out our leaderboard with King, accounting for 1.71 percent of the industry’s response. Propelled by an estimated spend of $3.8 million, the brand ran two ads, both promoting Farm Heroes Super Saga, over 3,700 times on national TV during this period. Through effective placements on CBS, the brand generated a lot of attention on shows including American Gothic and The Big Bang Theory. With all said and done, King’s ads have been viewed online 268,000 times, searched for 36,500 times and mentioned on social media nearly 1,500 times.