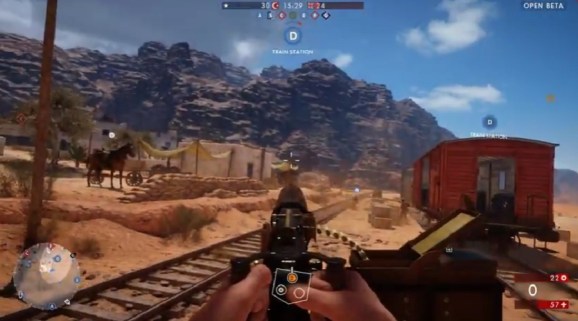 I was scurrying across the Sinai Desert today in the open beta test for Electronic Arts’ Battlefield 1 game.

The new Battlefield is one of the biggest games of the fall season, debuting on the PC and consoles on October 21. EA was no doubt eager to spread the world about Battlefield 1’s gameplay before rival Activision held its Call of Duty XP event this weekend in Los Angeles, where it will show extended demos of Call of Duty: Infinite Warfare.

The beta includes the new Sinai Desert map, which offers a diverse gameplay experience that takes advantage of all of the elements that make World War I a nice setting for a Battlefield game.

I downloaded an early version today from EA’s Origin portal on the Windows PC. I spawned as an assault soldier with a machine gun. And I died quite a few times before I even knew what hit me. I saw lots of tanks, machine gun trucks, biplanes, and horses that made everybody much more mobile in the desert landscape. We had to rush between settlements and control them. But I kept getting taken down by surprises from all directions, as you’ll see in the video below.

The map has two modes in the open beta. One is the classic Conquest mode where up to 64 players can take to battle on the largest scale. The second is Rush mode with up to 24 players, where the Attacking force must find and destroy the Defending force’s Telegraph Posts.

If you want to check out what the game looks like, rather than witness some expert playing, than I suggest you check out the video capture below.