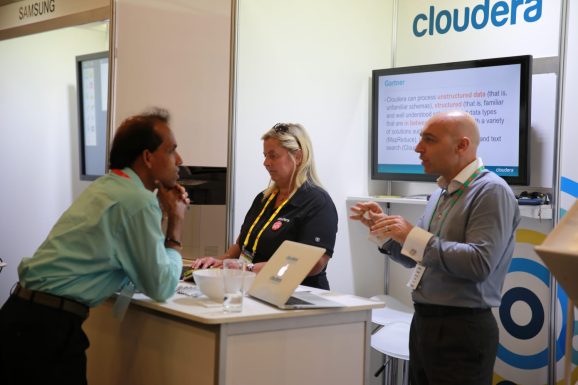 About one month ago, Tom Reilly, the company’s chief executive, approached Intel with a proposal requesting $1 billion in new money, a source familiar with the matter told VentureBeat. The companies have a history together; in 2014 Intel announced a major partnership with and investment in Cloudera.

The plan is for Cloudera to build out the necessary data center infrastructure for new cloud services that the company could then provide to customers.

“Cloudera wants to grow into its true destiny” of being an actual cloud service provider, the source told VentureBeat. The source did not know if Intel had given Cloudera the money it requested.

Should Cloudera get the money it’s seeking, the company would more directly go after public cloud market leader Amazon Web Services (AWS), which pushes Elastic MapReduce (EMR), a distribution of the Hadoop open source software for storing, processing, and analyzing lots of different kinds of data. The Microsoft Azure public cloud also has its own Hadoop distribution.

A Cloudera cloud would not be challenging AWS and Azure on all fronts — Cloudera is only interested in hosting the big data workloads, the source said. But it could still threaten startups offering cloud software known as Hadoop as a service, such as Altiscale (which SAP is acquiring) and Qubole.

Cloudera is especially eager to win big deals worth tens of millions of dollars, the source said.

The timing is right. Cloudera is in a position to go public, and new cloud services would increase Cloudera’s total addressable market. Investors might like the idea of Cloudera chipping away at AWS, which is consistently pulling in more than $2.5 billion in revenue and hundreds of millions in operating income. For context, last year IDC forecast that people will spend more than $195 billion on public cloud, including software as a service (SaaS) such as Hadoop as a service, in 2020.

Cloud software is not new. Salesforce has offered it since 1999. AWS has been renting out compute and storage resources to companies and individual developers in the infrastructure as a service (IaaS) business since 2006. But it may not be too late for Cloudera to go in the cloud direction, as companies become more willing to store vast supplies of data remotely and run their applications remotely, too.

It’s possible for enterprises to deploy Cloudera’s software on AWS, among other public clouds. So it would be reasonable to expect Cloudera to provide something distinctive in its own service — or at least something that goes beyond just a managed, cloud-based implementation of the Cloudera Distribution of Hadoop (CDH).

From the beginning, Cloudera has been about commercializing Hadoop. Primarily companies run Hadoop on their on-premises data center infrastructure, and cloud deployments are typically in the minority for Cloudera, as well as other companies that sell Hadoop distributions, like Hortonworks and MapR. But the decision to construct the infrastructure necessary to run cloud services suggests that perhaps the world is closer to a “cloud era,” as the company’s name implies.

The deal could strain Intel’s existing relationship with AWS. In 2014 and 2015 AWS boasted of a partnership with Intel that has allowed it to offer high-performing chips to customers. Now, even though Intel has worked closely with AWS, Intel could also be bankrolling the creation of a potential rival to its partner.