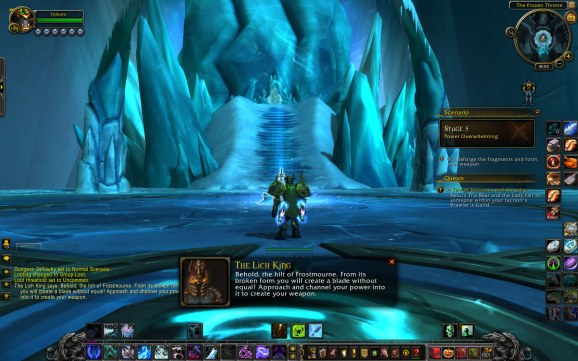 Return to the Frozen Throne.

The Legion can wait, I’ve got some weapons to collect.

World of Warcraft’s newest expansion, Legion, came out today, and I’m going to be writing daily about my experiences during this launch period. Legion gives players a new land to explore and raises the level cap from 100 to level 110. But you’ll quickly get to see some of the expansion’s coolest content in the beginning: Artifact weapons and class halls.

I spent a lot of my first few hours collecting these powerful weapons, and the quests and stories involved in doing so makes me feel hopeful about World of Warcraft’s future. 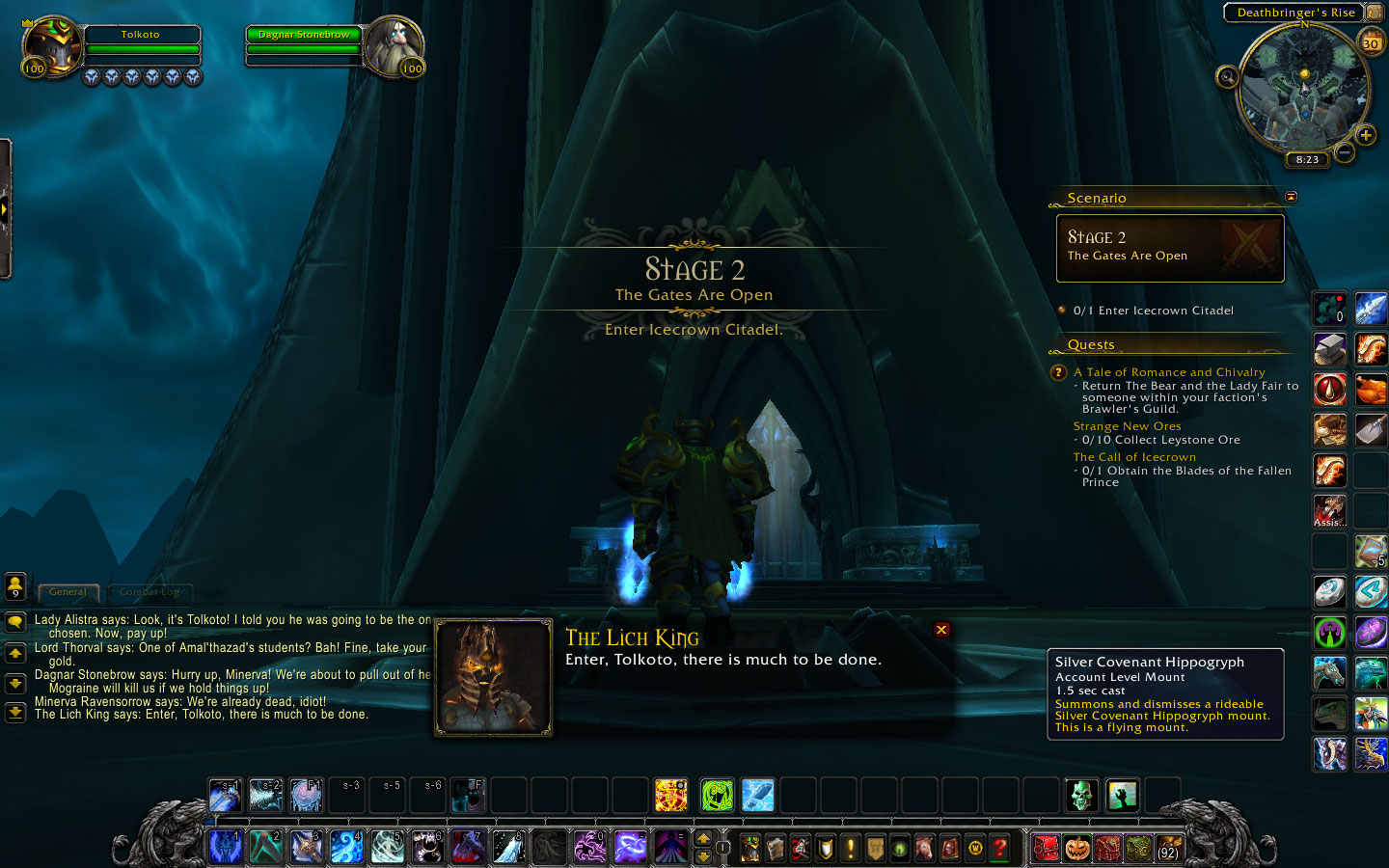 Above: Starting my quest for awesome weapons.

The best part of a massively multiplayer online role-playing game like Blizzard’s usually happens at the end, when you begin to run dungeons and raid events with friends. The beginning is usually filled with simple quests and boring dialogue, setting players up for their journey through a new area.

Legion had a comparatively quick start. Thanks to pre-expansion content released during the last few weeks, we already went through a lot of that buildup. We did the quests that explained why we had to go to the Broken Isles. When I started the game today, I just had to do one quick event, and then I was in Dalaran (the capitol city) above the new zones. In most expansions, you don’t get to the capital city until you’ve done hours of questing in the new areas. It’s nice to have immediate access to such an important location, filled with its trainers, quest givers, and portals.

And just a minute after I arrived, my Artifact weapon quest started. 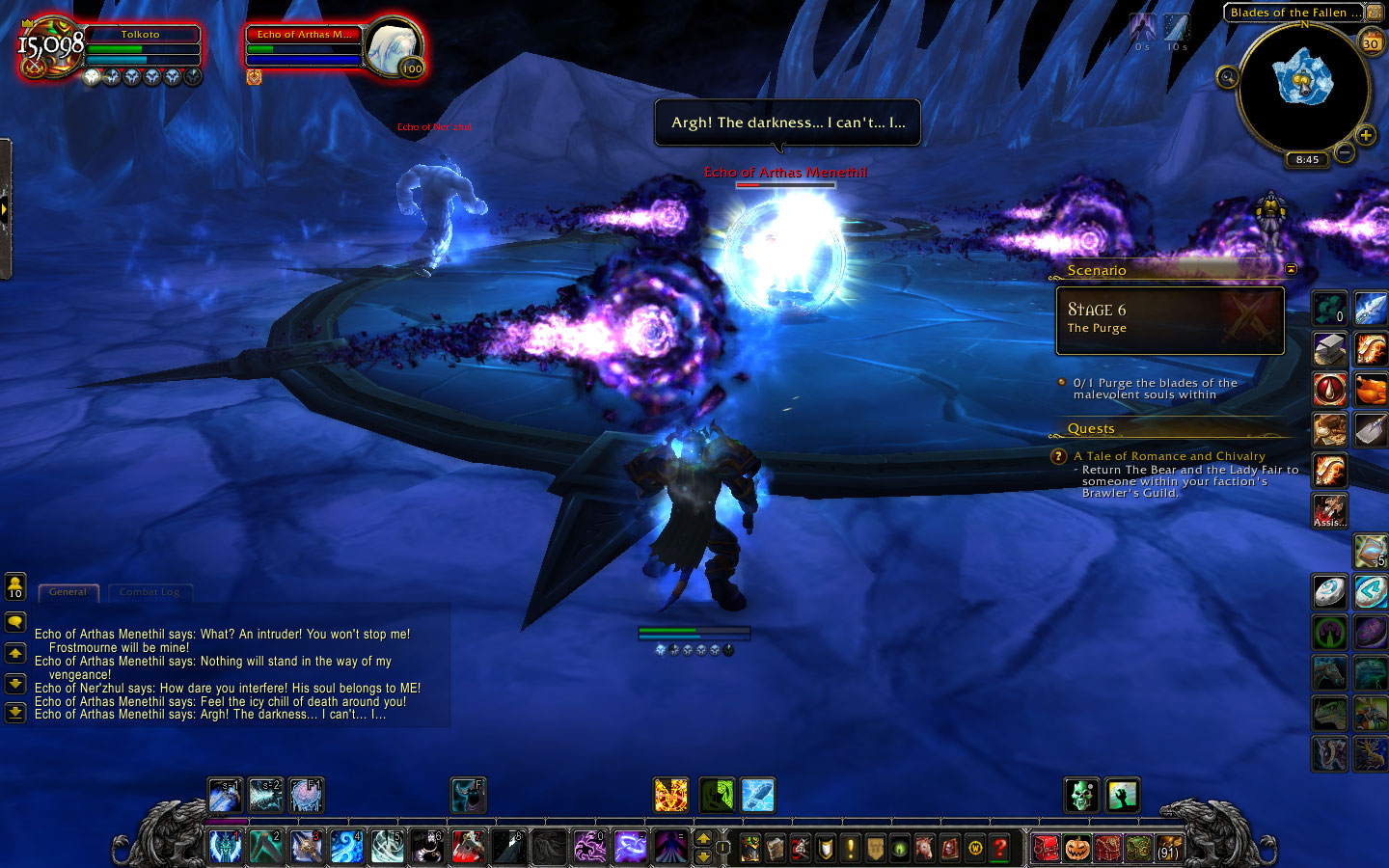 Above: My Artifact quest even included a surprisingly fun boss fight.

Artifact weapons are a new thing in Legion. Each specialization of each class has their own, and they use them throughout the expansion. But you don’t just get them delivered to your mailbox. You have to do a series of quests to unlock them. These quests were the best solo content I’ve seen in World of Warcraft.

I was first playing as my Frost Death Knight. My Artifact quest had me return to Ice Crown Citadel, the final raid from the Wrath of the Lich King expansion. These events featured characters from the game’s past, many of which I haven’t seen do anything noteworthy since that Lich King era.

And the quests weren’t just boring, go-there-kill-that affairs. I had to kill dodge freezing mists of ice, slay spirits that put up a decent challenge, and even defeat the tag-team spirit forms of Arthas and Ner’zhul, two characters integral to the Death Knight lore. Since only Death Knights will go through this stuff, Blizzard was able to craft the experience specifically for my skills. In the end, I unlocked my Artifact weapon : the Blades of the Fallen Prince. It was a triumphant moment! 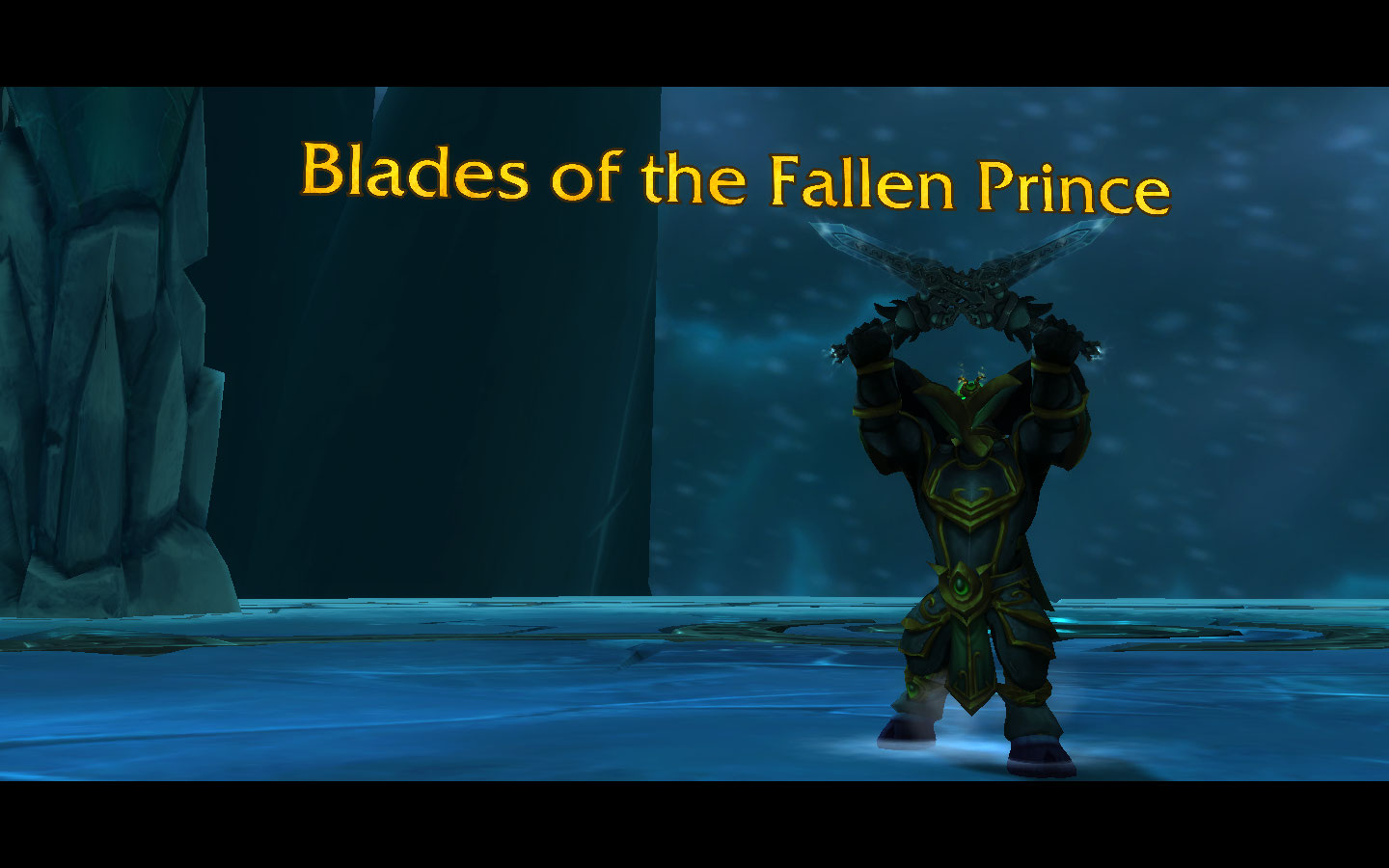 Artifact weapons don’t just look cool, they’re link with your progression. While you’re leveling up, you can increase your weapon’s power. Not only can you make it deal more damage, but you can even unlock new abilities. For example, my Death Knight blades can eventually let me summon an ice dragon that breaths ice over my enemies. Neat! 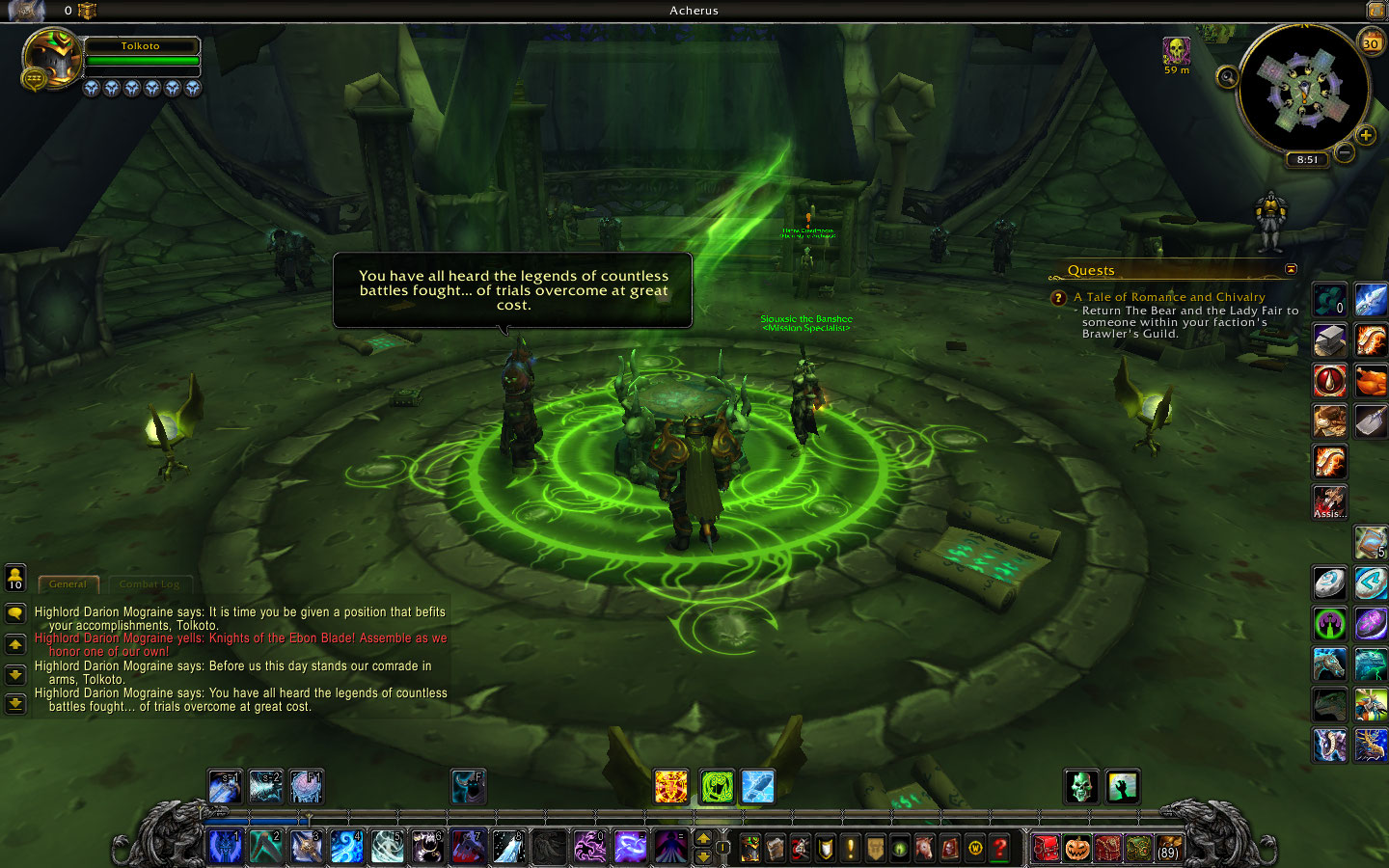 Above: Planning stuff in my class hall.

Shortly after, I became the leader of all Death Knights within my class hall, another new feature in Legion. While past expansions place your character’s identify with their faction (Alliance or Horde), Legion is more about your class. The class hall is a place where everyone from the same study of combat (Mage, Warlock, Paladin, etc.) gathers. It gives you a place to upgrade your Artifact weapon, accept missions across the Broken Isles, and more.

Warlords of Draenor did something kind of similar with Garrisons, bases that each player had. However, Garrisons only came in two flavors: Alliance and Horde. They didn’t reflect your character’s personality. They also felt dead since other players could only come in if you invite them. Class halls solve both of those problems. They look great and reflect the identity of each class, and you have other players running around to make them feel alive.

For my Death Knight, the class hall was actually pretty familiar. We’ve have had the Ebon Hold to travel to as a place to do unique Death Knight stuff like runeforging. Basically, we’ve had class halls before class halls were a thing. I was more excited to see what these locations looked like for my other characters. 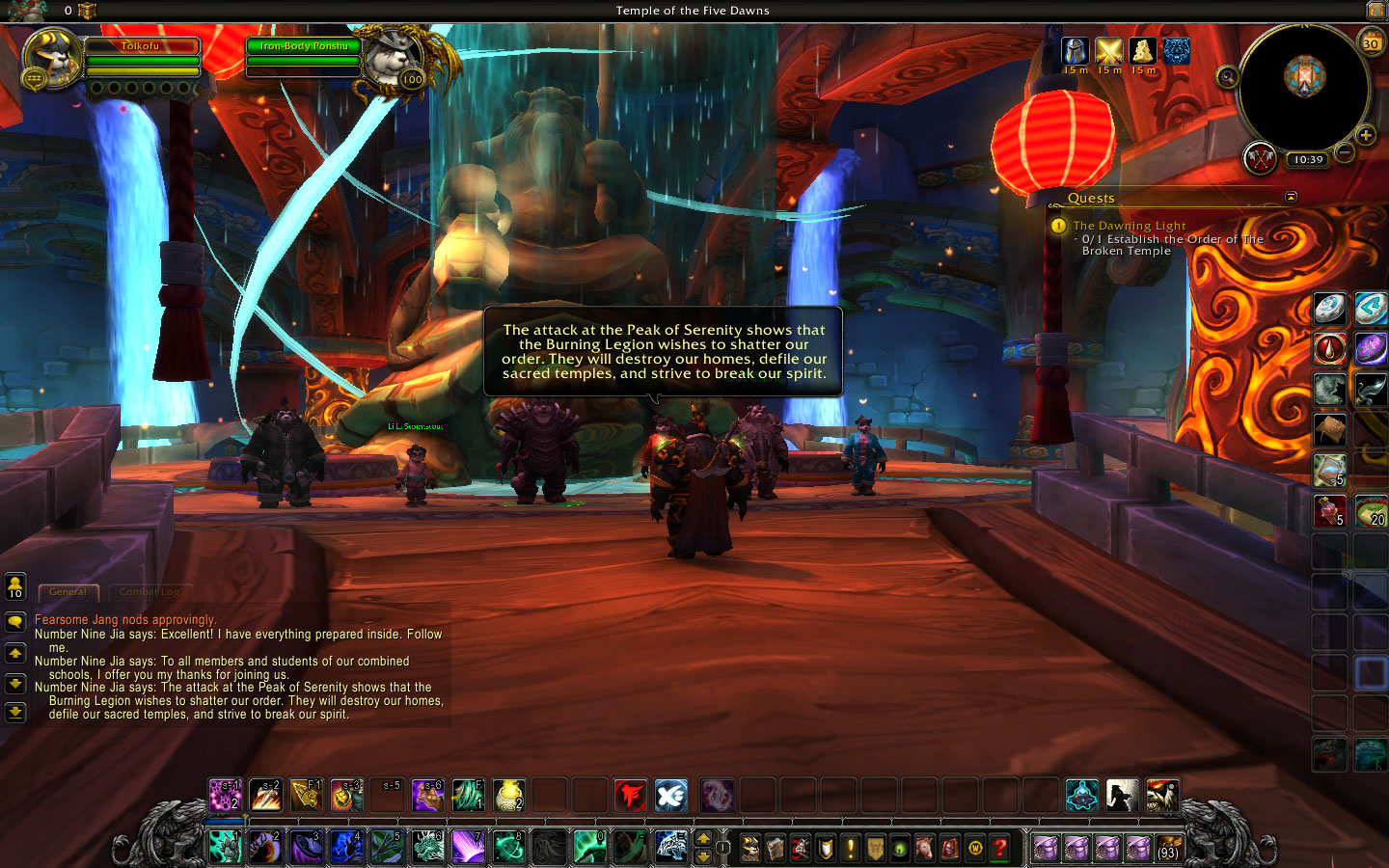 Above: Time to give my Monk a turn.

I enjoyed my Artifact quest so much that I immediately started playing with another one of my level 100 characters, this one a Pandaren Monk. It was another great sequence of quests and story events that brought back locations and characters from World of Warcraft’s past, this time focusing on the Mists of Pandaria expansion.

The Monk class hall was also familiar. The Wandering Isles is the starting area for all Pandaren. However, unlike the Ebon Hold, you couldn’t easily return to the place. It’s a beautiful location, so I was happy to see it become a prominent place. My Windwalker Monk Artifact quest took me to Uldum, a zone introduced in the Cataclysm expansion. I got to fight some wind spirits and unlock some fancy fist weapons.

I was hooked to this level of quality in solo content. I tried my Undead Warlock next. This time, I was enslaved by a demon, found a soul-sucking scythe, and established Warlock headquarters on a floating rock in the Twisting Nether. Again, it was rewarding story-driven content. 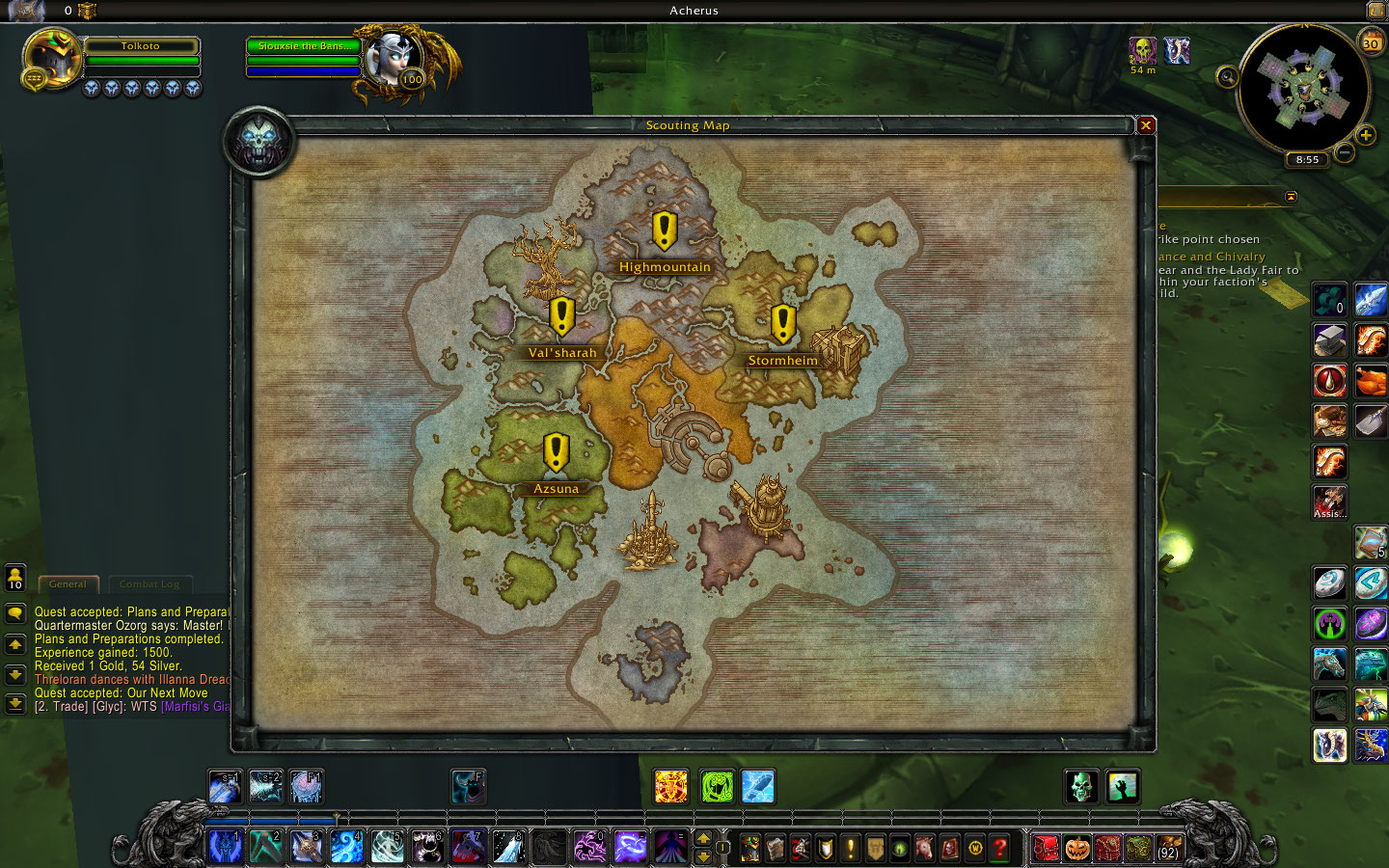 Above: This is where you figure out what zone you want to tackle next.

Time to save Azeroth, I guess

I’m tempted to do the Artifact quest for my other two level 100 characters (a Paladin and a Demon Hunter), but now I’m starting to get worried that all of my friends are going to pull ahead of me in the race to level 110. I loved these quests, and I hope they’re a sign of the quality of the solo content ahead of me in Legion.

I also adore the the class halls. They make me feel a stronger connection to my character, and they make for a more unique place to chill out than generic Garrison.

Now, it’s time to go about that whole world-saving business.