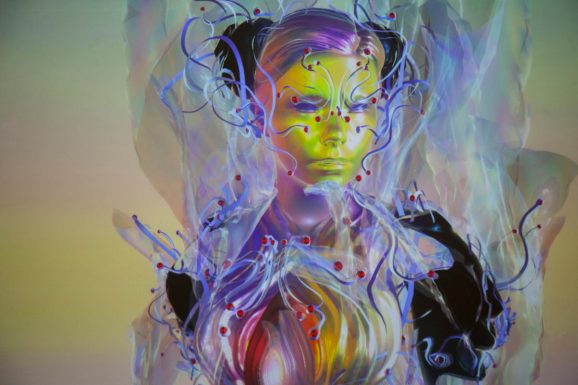 When it comes to the fantastical and strange, everyone is always going to have a hard time topping Icelandic singer Björk.

But today Björk took another step into the realm beyond where the rest of us live by conducting a press conference in which she appeared as a live motion capture avatar. While Björk was 1,200 miles away wearing a “mocap” (motion capture) suit in a studio at the Icelandic Media College in Reykjavik, her image was appearing in a London gallery rendered in a swirling rainbow of colors and objects.

On her Facebook page, Björk said the motion capture stream was intended to emphasize her embrace of new technology and the role virtual reality played in the creative process that led to her new album, Vulnicura.

“Technology is enabling women to work outside the already formed hierarchical systems,” she wrote. “The laptop arriving in 1999 gave me a personal studio to make ‘Vespertine,’ the touchscreen 2006 helped me map my own idiosyncratic musicology outside the classical canon and reconnect it w nature and make ‘Biophilia,’ VR is helping making a new stage free of politics where sound and vision is swirling free in 360 fully liberated.” (sic)

The rendering of her motion capture badself today was aided by #D technology from Autodesk and Unity. The image was then digitized and streamed by engineers from London’s The Imaginarium Studios.

You can get a glimpse of it here in this video clip on her Facebook page:

The album Vulnicura is set to be released later this year in VR formats.

Here’s a bit more detail on the album from a press release:

Björk has long supported the convergence of music, art, and technology, embracing VR early as new medium and means for engaging fans. In September, she’s gearing up to release the full Vulnicura VR album, also developed on the Unity platform for HTC Vive, Oculus Rift and Samsung Gear headsets. But, canned VR experiences just scratch the surface of the platform’s true potential. Today’s live motion capture stream represents a major leap forward toward the near future where individuals can be placed at the center of real, live performances and entertainment experiences, from concerts to speeches and sports events, via VR.

UPDATED: Here’s a longer clip of the press conference for a better sense of the mocap streaming in action.