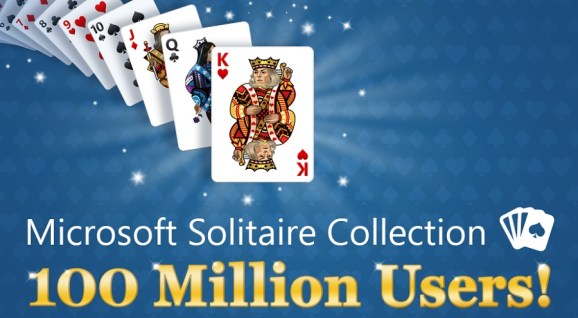 We all know that solitaire is a game that you play only when there is nothing better to do. And Microsoft shared a number today that shows a lot of us are bored.

Microsoft said today that its Microsoft Solitaire Collection has reached more than 100 million unique users on Windows 10, Windows 8, and mobile devices. That’s not bad for a game that, considering all of its versions, is 26 years old. And the game suite will soon launch on iOS and Android and add events as well. I’m among the many people who have spent a lot of time with solitaire, going far back into the decades. I share “fond memories of winning a game and seeing cascading cards bouncing across the computer screen,” as Microsoft says, from those days when I had nothing better to do.

Today, the Microsoft Solitaire Collection features five Solitaire games — Klondike, Spider, FreeCell, Pyramid and Tripeaks — all in one app with new Daily Challenges, Star Club, and Xbox Live Achievements. The game was originally developed by Arkadium in 2011, and it has been supporting it for the past five years.

Microsoft said that in its 26-year run, solitaire still remains one of the most played games of all time on any Windows OS. On average, 55 million Microsoft Solitaire Collection games are played per day – that’s equivalent to 20 billion games per year, 2.29 million each hour, and 38,194 each minute.

Since Microsoft Solitaire Collection added support for Xbox Live when it released on Windows 10 and 8, the game has awarded more than 1.3 billion Gamerscore (part of Xbox Live’s profile showing your game achievements) to players to date.

This fall, Microsoft said that the Microsoft Solitaire Collection is coming to iOS and Android. With Xbox Live integration and cross-platform play, you can continue playing the game and earning Daily Challenge coins and Xbox Live Achievements, while on the go.

And Microsoft is introducing a game mode dubbed Events to Windows 10 this fall. That will allow you to compete for awards against the community and your friends.