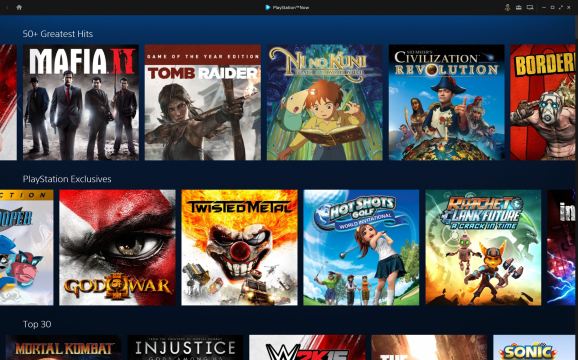 I’m running around a mythical city as Kratos, the god of war, but I’m not using a PlayStation console. This is strange.

You no longer need to purchase PlayStation hardware to play a number of first-party Sony games — well, at least the older ones. The publisher released its PS Now game-streaming service on PC earlier this week, and that means you can boot up a number of PS3 classics on a PC running Microsoft’s Windows operating system. I’ve given the experience a try. It works, and it seems like a major step toward a different future for the way gaming platforms work. It also indicates that some other PlayStation services, like the TV-streaming program PS Vue, could come to Windows PC soon as well.

The thing about PS Now on PC is that it still feels a lot like a Sony product. You need to use the DualShock 4 controller, and the interface is a version of the XMB (cross media bar) that the company has used for years. My early results were mixed. I’m on Wi-Fi, and I had a few connection issues. When I did get into some games, the noticeable lag made what I played more difficult than they normally are — and it made online multiplayer in Ultra Street Fighter IV unplayable.

Despite any connectivity problems, this clearly signifies that PlayStation is more than a box that plays video games for Sony. A service that serves up your digital library of PlayStation games on your television, PC, or smartphone is something that could help Sony leave behind the console cycle, and it has that with PS Now. While you can only get PS3 games on the service at this point, it seems likely that Sony will continue to expand what it offers on the streaming network. PlayStation 4, as well as PlayStation and PlayStation 2 classics, are likely inevitable.

By establishing PS Now, Sony is setting up a service where it can generate income from its games and from distributing third-party software even if something like a PlayStation 5 flops. Figuring out the long-term future of gaming is crucial for Sony because the PlayStation division is one of its last profitable ventures, and it’ll find itself in a tough spot if that revenue ever dries up.

For gamers, all this means is that you now have a method of playing beloved hits like Uncharted, Sly Cooper, and God of War without having to purchase a PlayStation-branded system.