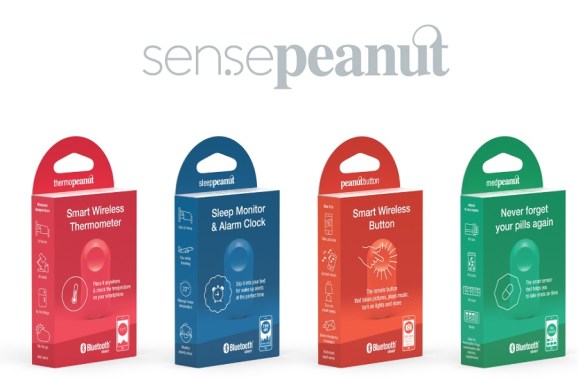 Known for its quirky Mother home monitoring device, Sen.se is diving deeper into the Internet of Things market with its new ThermoPeanut connected sensors.

The Internet of Things, or making everyday objects smart and connected, is expected to become a market of 50 billion devices by 2020, according to Intel. And Paris-based Sen.se wants a lot of those to be its devices. The company launched the Mother device in 2014, and now it’s following that up with more smart devices.

Each SensePeanut device costs $29. Each has its own set function, task, or habit that it can monitor, allowing anyone with a smartphone or tablet to take advantage of the connected life.

“SensePeanuts are designed to bring people the benefits of smart life automation without the need for costly or complicated solutions. We are thrilled to launch ThermoPeanut as the first in the line,” said Rafi Haladjian, founder and CEO of Sen.se, in a statement. “Whether you are monitoring room temperatures, making sure your refrigerator is cooling properly or keeping a server room at an optimal level, ThermoPeanut takes the guesswork out of temperature tracking and thanks to integrations with partners such as NEST and IFTTT, allows users to take action when issues arise.”

ThermoPeanut is available now. In the fourth quarter, more SensePeanuts will debut that can monitor sleep and track medication. They will also have smart buttons that give everyday items smart powers.

With the two-inch ThermoPeanut, anyone can track the temperature of any space, including bedrooms, pet kennels, refrigerators, basements, campsites, and more. It connects via Bluetooth 4.0 to smartphones and tablets using a dedicated iOS or Android app. ThermoPeanut measures temperatures ranging from minus 5 degrees Fahrenheit to 140 degrees Fahrenheit, and it will do so at regular intervals. Results are sent to any registered device within 200 feet, or the results can be stored for up to a month for later transfer when out of range.

When the temperature goes beyond preset normal levels, in-app messages and sound notifications are triggered. The data is sent to the app, which can then present the results in graphs to indicate trends over time. ThermoPeanut is available on the company’s website and on Amazon.com.

Sen.se was founded in 2010, but the vision for connecting smart things goes back to an earlier startup, Violet, founded in 2003. Violet created the Nabaztag wireless rabbit, which is now owned by Aldebaran Robotics. The founders of Sen.se are Haladjian, cofounder of Violet, and Frank Biehler, an early member of the Violet team.

Other devices in the series include MedPeanut (for monitoring medicine intake), SleepPeanut (for monitoring sleep), ProximityPeanut (to find lost items), HydraPeanut (to monitor water intake), DoorPeanut (to track the comings and goings in a home), SafePeanut (for securing valuable objects), and PeanutButton (which is customizable). Multiple SensePeanuts can be set up in each app and synced at any given time.

Sen.se is showing the tech at the IFA show in Berlin. More devices will be launched in 2017.