Twitter is testing a feature in Periscope that lets a limited number of broadcasters incorporate video from external sources, meaning that soon you may no longer be restricted to livestreaming video from your mobile device, GoPro camera, or drones. Should this experiment work well, creators could be empowered to spruce up their broadcasts, something that takes a page out of YouTube’s playbook and will likely appeal to influencers.

“We’re always testing new functionality that gives our broadcasters the ability to create great content,” a Twitter spokesperson said in a statement to VentureBeat. 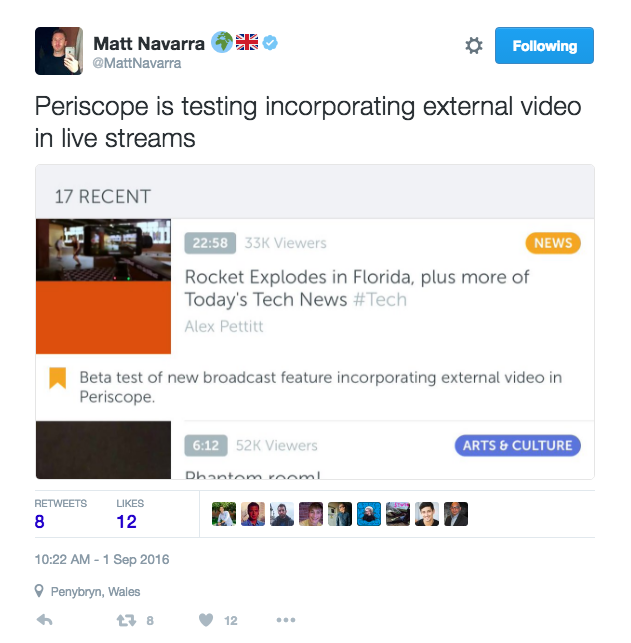 Some users may notice a label for certain broadcasts that reads: “Beta test of new broadcast feature incorporating external video in Periscope.” This feature represents on-going efforts by Twitter to reach out to influencers, something that chief executive Jack Dorsey has outlined as a focal point for 2016.

The feature will allow content creators to kick their broadcasts up a notch, especially as they talk about live events. In fact, one of most recent demonstrations of this offering come from broadcaster Alex Pettitt on Thursday, with coverage of the SpaceX rocket explosion. Instead of pre-recording video and then editing it in post-production, creators will have an easier time posting high-quality video in real time.

The incorporation of video from external sources follows recent changes Twitter has made, including helping creators monetize their work through its Amplify Publisher program and enabling them to add pre-roll ads to their videos. Additionally, the company has included Periscope in that same initiative, which means ads are coming to the livestreaming app for select broadcasters.

In the battle of live video, Twitter is going full steam ahead to capture the attention of creators, a group that remains very much in-demand. YouTube, Snapchat, Facebook, and Twitter are all vying for these creators’ content and audience because that leads to not only more advertising impressions, but also more users and activity across their properties.