So while Europe might be a single market, it’s definitely not a single tech scene. That fact makes it difficult to feel the pulse of the European tech. But if you take a close look, you’ll quickly notice that there is interesting stuff happening in Europe – to the point that we’re spotting young EUnicorns, the European answer to Silicon Valley’s unicorns! In order to get a good overview of the scene, Sirris.be, the non-profit I work for that maps Belgian tech startups, recently looked at all of the European tech companies that have raised at least $1 million in 2016. The data (you can view it here), which is comprised of more than 1,100 transactions from 30 countries, reveals 10 surprising insights. Here they are — the good, the bad, and the ugly of the old continent:

1. Paris, not Berlin, is the challenger to London post-Brexit
A lot is been written lately about the future position of London as the European leading tech city post-Brexit. Yet, raising capital hasn’t slowed down for London. On the contrary, July saw the highest number of venture deals in 2016. And despite all the buzz about Berlin, if there is a challenger to London, it is Paris. Paris has significantly more deals and capital raised than Berlin. The lesson is that Paris should improve its PR story. A great PR opportunity is coming up in 2017 when the biggest incubator in the world opens in the city of light. 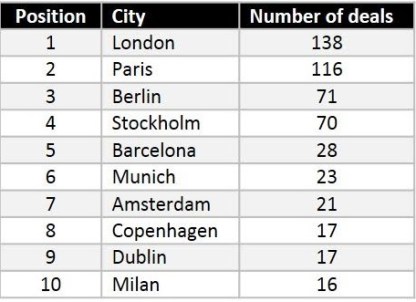 2. The curious case of tiny Sweden
It’s clear from the above city ranking how close Stockholm is to Berlin in number of deals. In dollar value, Stockholm is already 3x bigger than Berlin, thanks to Spotify. There was a time that startups moved from Stockholm to Berlin to scaleup their business – think SoundCloud. But now Sweden is in a league of its own with unicorns such as Skype, Minecraft, Klarna, Spotify, and King. And who doesn’t know MySQL, Kazaa, uTorrent, and Pirate Bay? The country is leading the 2016 ranking in a number of industries, including gaming, music-tech, and sport-tech, giving much bigger economies such as Germany, UK, Spain, Italy, and France a run for their money. The high number of deals is all the more surprising given that the country has a population of less than 10 million, with less than 1 million in Stockholm.

3. It’s not always a capital city that’s at the epicenter of a scaleup ecosystem
Barcelona (Spain), Milan (Italy), Lausanne (Switzerland), Ghent (Belgium), Porto (Portugal), and Kracow (Poland) are the scaleup cities of their respective countries. The gap between Milan (16 deals) and Rome (1 deal) is significant. The same for Barcelona (28 deals) versus Madrid (8 deals). Often the explanation is obvious. Barcelona and Milan are the economic capitals of their respective countries. For others, like Ghent, it’s due to a high-performing startup ecosystem that gave birth to Showpad, Engagor, Tele Atlas, Teamleader, Adam Software, Drupal, etc and a strong accelerator: iMinds. Lausanne, on the other hand, has a university that managed to spin off the highest number of scaleups in Europe. It’s also home to two scaleups working on autonomous vehicles: WayRay, which raised €8 million ($9 million), and BestMile, which raised €2.3 million ($2.6 million).

4. FinTech is hot, but blockchain is top of the hype cycle
The FinTech industry is dominating the scaleup ecosystem this year with the highest number of deals (122 in total). The numbers confirm that FinTech is still hot. The UK, specifically London, dominates the industry.

Interestingly enough, just seven FinTech scaleups are using blockchain technology. It indicates that blockchain is indeed at the top of the hype cycle. Everybody is talking about it, but few startups are managing to validate their business model enough to raise capital and start scaling.

5. Universities are irrelevant in the innovation landscape
Only 5% of European scaleups are spin-offs or spin-outs. While it’s true that spin-offs are not the only way that universities can monetize research, it’s nevertheless an indication that innovation is mainly happening outside campuses and labs. Universities, together with big corporations, have lost their long lasting monopoly on innovation. However, universities do play a role in patentable hard tech in specific areas such as med-tech, biotech, encryption, materials science, robotics, nanotechnology, semiconductors, and the like. Note the better performance of smaller countries Switzerland and Belgium.

6. You don’t need to attend an accelerator program to scale
Just 7% of the European scaleups graduated from an acceleration program. Program alumni don’t necessary raise more money, but they are two years younger on average when they raise money. It might well be that they can start to scale earlier or have better access to investors thanks to the programs.

7. The most active 2016 venture investor in Europe is the French government
Bpifrance is a French public fund with a focus on investing in innovative small and medium businesses in France. Its mission is to prepare for “France 2030,” a program to take the French economy digital, and it is clearly on its way to doing that. Also the most active fund of the last 10 year is a government fund: High Tech Gründerfonds from Germany. So much for VC funds being the pinnacle of capitalism! Number 6 in the ranking of most active funds is French Kima Ventures from entrepreneur Xavier Niel. If we added the 6 investments that Niel made personally, it would bring the total to 16 deals, putting France in both first and second place in the ranking of most frequent investors. 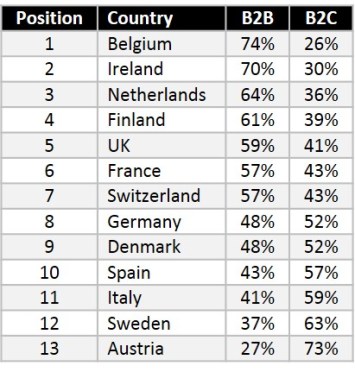 9. The middleman is dead; long live the middleman
The Internet was supposed to cut out the middleman. To a certain extent, that’s exactly what happened. But the Internet became the new intermediary. Not surprisingly, the marketplace approach is the leading business model for scaleups in Europe, counting for 21% of all scaleups. As an example, take “Airbnb for boats”: a marketplace model that connects boat owners with people who want to have an experience at sea. No less than four European scaleups raised a Series A in this space this year: 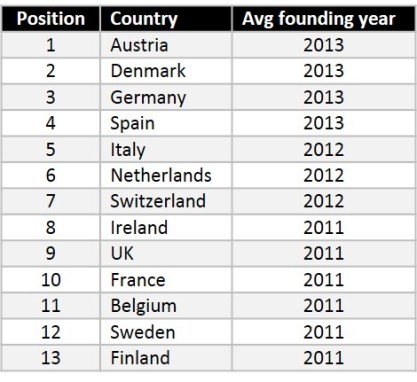 Europe’s startup ecosystems are alive, kicking and thriving. There are no borders in a digital world yet ecosystems are characterized by proximity and personal contact. Connecting all these national and regional ecosystems, which not only have different maturity levels but also have their own DNA, is the real challenge for Europe.

Omar Mohout is a former tech entrepreneur turned startup adviser. He works with Sirris, which is the collaborative innovation center of the Belgian technological industry, is a board member at Startups.be, and is also professor of entrepreneurship at the Antwerp Management School. He has also written a few books for startups, including Lean Pricing.