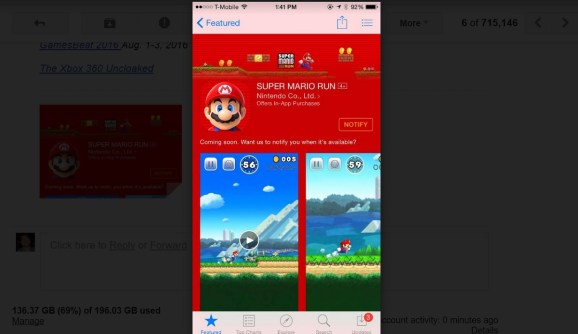 Apple has rolled out a new app store feature for Nintendo. If you go to the app store now, you can see Super Mario Run featured. If you tap on it, the app store tells you it will notify you when the game is ready to ship in December.

Other platforms call this preregistration, and Google Play has had it for a while. (Linekong used it for its Independence Day: Extinction game).

It’s important because it enables the equivalent of preorders for paid content on the app store. Taking preorders makes the market more efficient, as it enables marketing campaigns ahead of a launch. Such campaigns get people excited and ready to take some action, such as placing a preorder. In this case, the app is paid, but Apple isn’t asking anyone to put some money down yet.

Asian game companies have used preregistration to get players excited about a game well ahead of its launch date. It looks like Apple is catching up with that more advanced style of marketing.

Thanks to Shannon Chang for the tip.