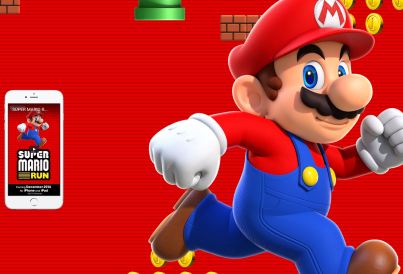 One of the most accomplished and well-regarded game designers in the history of the world just made a pitch for his new app today during Apple’s annual iPhone conference. Here’s why that matters more than an update to the Apple Watch or even an iPhone 7.

Shigeru Miyamoto announced that Super Mario Run, an auto-scrolling platforming game for mobile, is coming to iOS devices first in December. In response, Nintendo’s stock price has skyrocketed more than 29 percent. Nintendo’s app will have the portly plumber sprinting and hopping through familiar Mario levels, and you’ll compete for high scores against your friends. But while Super Mario Run is the most by-the-numbers Mario smartphone port that Nintendo could have possibly produced, seeing Miyamoto onstage was enough to make this feel like one of the most momentous reveals for the beloved Italian hero ever.

“Miyamoto on the Apple stage shows that Nintendo is serious about creating a mobile segment that can become a pillar on its own,” Niko Partners analyst Daniel Ahmad told GamesBeat. “The company is serious about bringing its [intellectual property] to as many people as possible and in turn will create synergy with the dedicated video games business.”

Miyamoto is the brilliant mind behind many of Nintendo’s globally admired franchises. He created Mario when he salvaged a debacle involving the loss of the rights to the Popeye property by creating Donkey Kong, which debuted in 1981. He went on to define the side-scrolling platform genre with Super Mario Bros. for the Nintendo Entertainment System. He also proved his versatility early on when he designed The Legend of Zelda open-world adventure based on his own explorations of the Japanese hillsides as a child.

To get reductive about it, Miyamoto is the Walt Disney of video games.

Above: Miyamoto with Mario.

More recently, Miyamoto has spent his time grooming a new generation of designers that can take over the Mario and Zelda franchises while building something new. In 2015, that led to the Miyamoto-mentored Mario Galaxy team creating the critically acclaimed multiplayer shooter Splatoon for Wii U, a game where you shoot paint, not bullets, making it appropriate for all audiences.

Now, gaming’s Walt Disney just made his first appearance at a media presentation for another company. And the motivations behind this move are clear.

Nintendo announced its first mobile game in 2015. It released the social network Miitomo on iOS and Android, and it worked with developer Niantic to release the megahit Pokémon Go. But the publisher never seemed all-in on the idea of apps as its primary business. Miitomo has fizzled due to a lack of significant improvements, and the company claimed that lesser-known franchises like Fire Emblem and Animal Crossing would represent its next two app releases.

That reticence, however, likely evaporated after Pokémon Go. The location-based, Google Maps-powered app debuted earlier this summer from The Pokémon Company, which Nintendo owns one-third of, and then immediately shot to the top of the grossing charts on iOS and Android. In its earliest days, Go was making approximately $10 million in revenues every single day — and Nintendo saw those reports. Getting a first-hand look at the potential of mobile spending seems to have convinced Nintendo leadership that it cannot afford to take its time with mobile.

“Nintendo has seen how Pokémon Go took off thanks to the strength of the Pokémon brand and the fact that the gameplay was adapted for mobile devices,” said Ahmad. “Pokémon Go was not only downloaded more than 500 million times, it also helped create synergy between Nintendo’s dedicated business and mobile business by driving traditional game and merchandise sales of Pokemon products. Nintendo will now be bringing their biggest IP, Mario, to try and replicate that success and create a game that reaches a large audience, can be successful in its own right, and drive synergy with the traditional business.”

Nintendo likely also got a jolt from the rollercoaster ride its share price took following the release of Pokémon Go. Many investors were unaware that Nintendo wasn’t 100 percent responsible for the latest Poké blockbuster, and they invested in the company and ballooned its value. That forced Nintendo chief executive Tatsumi Kimishima to explain in a note that Pokémon Go would have a limited impact on his company’s financial. Predictably, the publisher’s stock plummeted on that revelation.

But Nintendo got a taste of what it means to have a top-grossing mobile game, and now it wants investors to see that it is taking mobile head on.

Bringing Miyamoto onstage to announce Super Mario Run is Nintendo’s way of letting the world know that it is now a mobile-game publisher. The industry luminary is everything that traditional gaming fans — people who prefer consoles and PC over a touchscreen — love about the medium.

Investors also know how key Miyamoto is as both a creative force and a figurehead of the Nintendo brand. By trotting him out and forcing him to speak a few lines of English, something he’s never done with confidence, Nintendo is indicating to Wall Street and Tokyo that it has its sights set on mobile.

“By letting Miyamoto present Mario onstage, Nintendo is sending several messages,” industry analyst Serkan Toto told GamesBeat. “[Nintendo’s saying:] ‘We are taking mobile seriously, we let our best minds work on smartphone games, and we can even get the world’s biggest tech company to partner and let them do the marketing for us.'”

Alongside the announcement, Nintendo also launched its mobile-gaming YouTube channel. You can see the first Super Mario Run gameplay from that account.

“We couldn’t be more honored that Nintendo chose to bring Mario to us first,” Apple chief executive Tim Cook said on stage in San Francisco today.

Apple is honored, and investors are buying into the hype once again. And Nintendo’s share price is approaching the high it hit over the summer.

That’s what the Mario company wanted. And all it had to do to get it was put its most important public figure centerstage of an Apple event to show the world that it is willing to leave behind its adherence to first-party Nintendo hardware.

“However, I think Nintendo is far from being a 100 percent mobile company,” said Toto. “They will not abandon video games and hardware anytime soon. The event from today must be seen separately from Nintendo’s traditional business and also the upcoming launch of the NX.”