Jory Des Jardins may have left BlogHer, the company she cofounded in 2014, but that hasn’t stopped her from advocating on behalf of women. On Thursday, she launched her latest project, a new conference called The Scale Collective — aimed primarily at female technology founders — that promises to provide resources and support needed to overcome the “brick wall phenomenon” that may have stymied their company’s growth.

Alongside her cofounder, digital marketing executive Stephanie Agresta, Des Jardins has set up a one-day event in New York City where female founders and executives can not only hear from industry experts but can also participate in networking events and have personalized 1-on-1 meetings with other attendees.

“The goal for everyone is to create relationships to drive revenue. It’s not a pitch competition,” Agresta told VentureBeat. “It’s how do we create partnerships, customer relationships, opportunities that drive growth and revenue?”

The conference is expecting about 300 people for its inaugural year, following in the footsteps of BlogHer’s early years. The Scale Collective wants to help female founders raise money and explore new opportunities and will be bringing those in the consumer and enterprise spaces together for special consultations and to learn new skills and business practices to accelerate their company’s growth.

“Female entrepreneurs, by and large, tend to set a much higher bar for themselves when it comes to raising capital,” Agresta stated. “They believe they need to be much farther along in their trajectories, or 90 percent toward achieving a milestone, before they feel ready or qualified to seek capital or significant partnerships. Men, by and large, are more likely to seek capital earlier and agree to scale milestones before they have significant validation that they will get there.” 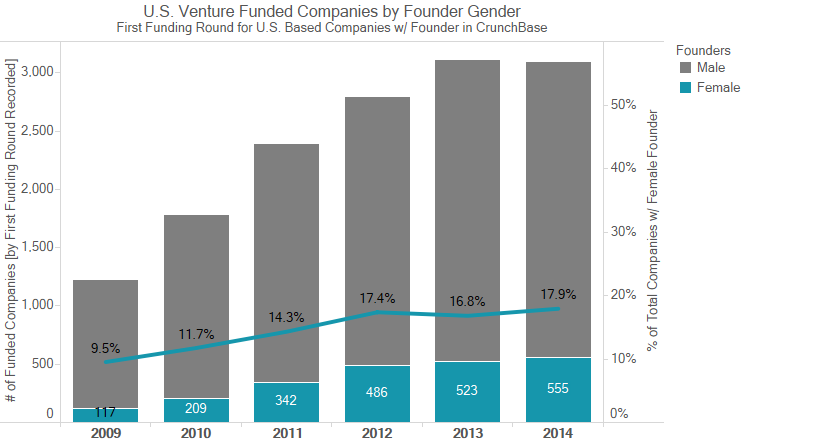 Above: Companies with a female founder grouped by initial investment year

She hopes that The Scale Collective will be beneficial in addressing the mismatch in expectations men and women have in being entrepreneurs and will create a path to a more positive outcome. She cites a 2014 study from Babson College that found businesses with a woman on the executive team were more likely to have higher valuations “at both first and last funding rounds.”

The invite-only event features expert speakers, including Halogen Ventures general partner and internet celebrity Jesse Draper, Randi Zuckerberg, and Des Jardin’s BlogHer cofounder Elisa Camahort Page. Additional speakers are planned in the coming weeks, but the conference is more than just a place for talking heads. Agresta said that there will be a lot of interactive networking sessions and “birds of a feather” moments, in which companies in similar verticals can meet with consultants.

All attendees are surveyed ahead of the conference to give organizers the information needed to best pair them up with experts and consultants for the one-on-one meetings. In the end, The Scale Collective wants to drive real outcomes and strategic growth in these companies.

So far, there are representatives from ClassPass, The Path, uBiome, 500 Startups, GV, HP Enterprise, Norwest Venture Partners, eBay, Facebook, GE, Johnson & Johnson, NASCAR, NASDAQ, and others signed up to attend the event. Tickets are $695 and are available by invite only. Although the program is geared toward female founders and executives, men are welcome. In order to select invitees, however, Agresta said organizers will look at a company’s growth potential, whether they have a proven business model, how much has been raised, and other criteria.

The Scale Collective will take place on November 2 at the Hudson Mercantile in New York City.