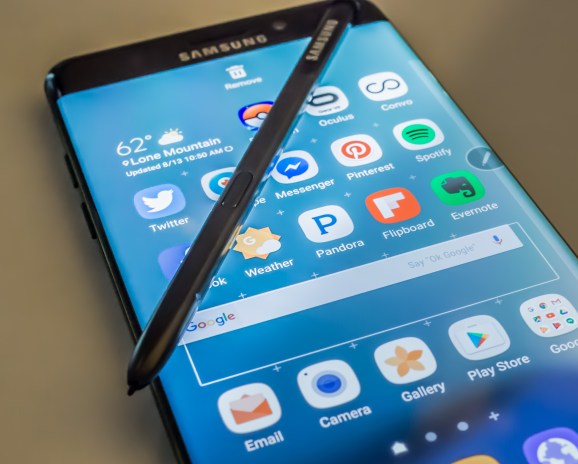 The Federal Aviation Administration has issued a statement “strongly advising” airline passengers against using or charging their Samsung Galaxy Note7 device while in flight. The advisory comes as Samsung deals with reported cases of exploding batteries in its latest phone.

The statement reads in full:

In light of recent incidents and concerns raised by Samsung about its Galaxy Note 7 devices, the Federal Aviation Administration strongly advises passengers not to turn on or charge these devices on board aircraft and not to stow them in any checked baggage.

Last week, Samsung sent notices to those who have purchased the Note7, saying that it has “identified an issue with certain Note7 battery cells. As a Note7 owner, we encourage you to participate in our US Note7 Exchange Program to receive an exchange.” The company discovered that a faulty battery cell was the culprit behind 35 cases in which people reported their phones exploding.

To address this latest crisis, Samsung has begun a voluntary recall of the Note7 in exchange for a new one that’ll ship over the coming weeks. “We acknowledge the inconvenience this may cause in the market but this is to ensure that Samsung continues to deliver the highest quality products to our customers. We are working closely with our partners to ensure the replacement experience is as convenient and efficient as possible,” the company said in a statement.

Introduced in August, the Note7 brought the best of the Samsung Galaxy S7 series, with updated capabilities of its S Pen. In terms of productivity devices, it received positive reviews — that is, until reports surfaced of exploding batteries.

Today’s statement is an advisory, not a mandatory ban on the devices. However, the idea of having a device with these kinds of issues in a vehicle that soars 35,000 feet in the air might cause some to be unnerved.