The new systems tap the Nvidia NVLink technology to move data five times faster than any competing platform, said Stefanie Chiras, an IBM vice president, in an interview with VentureBeat. These systems and their operating systems are part of a larger business group that generates about $2 billion a quarter for IBM. And the A.I. markets they’re going after have exploded in the past couple of years.

IBM claims that the combination of Power8 processors and Linux software results in systems that deliver 80 percent more performance per dollar than the latest x86-based (Intel or AMD) servers. The systems leverage innovations from the OpenPower community to deliver greater computing efficiency.

“We are very focused in competing head-to-head in the Linux market,” Chiras said. “The workloads in this space are changing at a very fast rate.”

Early testing with China’s Tencent, one of the world’s largest internet service providers, has shown that a large cluster of the new IBM OpenPower servers was able to run a data-intensive workload three times faster than its former x86-based infrastructure. That was possible even though the number of servers was reduced by two-thirds. Tencent is now integrating the new servers into its hyperscale data center for big data workloads. That will help it keep a lid on data center sprawl.

Big companies are pouring a lot of money into A.I., self-driving cars, real-time fraud protection, and life-saving drugs. Developing these products requires lots of new computing power, and IBM is taking an open development approach to moving into these markets, as is evident with the collaboration with Nvidia. Nvidia is making its own big push into data centers, using the parallel processing capabilities of its graphics processing units (GPUs). About 10 percent of IBM’s system revenue in 2015 came from Linux.

“Linux has taught us a lot about collaborative development,” Chiras said. “And Power is still an alternative to the x86 architecture in the market.” 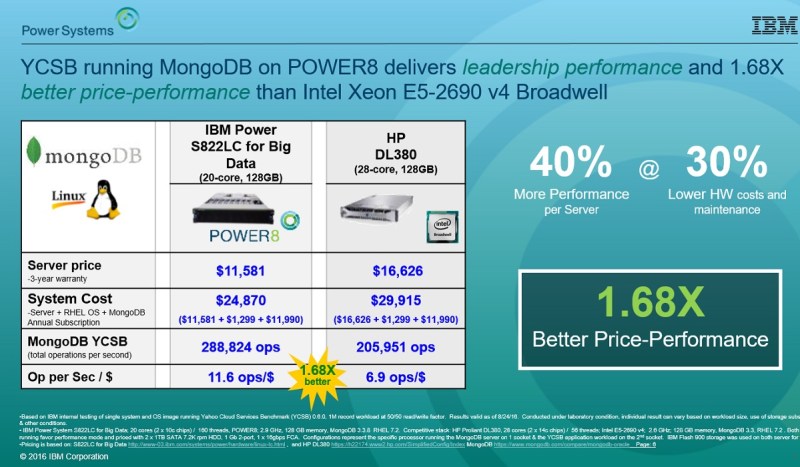 Above: IBM says its new Linux servers give it much better performance per price over rivals.

With the advent of GPGPU computing, or using graphics chips for non-graphics tasks, Nvidia’s technology is breaking into a lot of data centers. (Intel says this represents a mere three percent of all servers at the moment.)

Through a family of interconnect innovations collectively known as PowerAccel, contributors to the OpenPower ecosystem will continue to develop systems and other solutions on the Power platform that are optimized for accelerated applications.

“The open and collaborative model of the OpenPower Foundation has propelled system innovation forward in a major way with the launch of the IBM Power System S822LC for high-performance computing,” said Ian Buck, vice president of accelerated computing at Nvidia, in a statement.

Several businesses, research organizations, and government bodies have pre-tested early systems and placed their orders. Among those first in line to receive shipments are a large multinational retail corporation and the U.S. Department of Energy’s Oak Ridge National Laboratory (ORNL) and Lawrence Livermore National Laboratory (LLNL).

The systems will serve as an early-generation test bed for developing demanding applications for Summit and Sierra, the next-generation supercomputers that IBM expects to deliver to ORNL and LLNL, respectively, in 2017.

“The combination of IBM Power8 and Nvidia Pascal via NVLink will accelerate our mission-critical applications,” said Bronis de Supinski, chief technology officer at Lawrence Livermore National Laboratory, in a statement. “The significant reduction in programming complexity that they support was a major contributor to our decision to use these technologies in systems that will serve as precursors of our planned Sierra system.”

IBM introduced its first Power8 chips in the second quarter of 2014, and it has been adding more versions over time. IBM also launched the OpenPower Foundation in 2014, and now it has 250 members. The Power9 chips are expected to arrive in the second half of 2017.