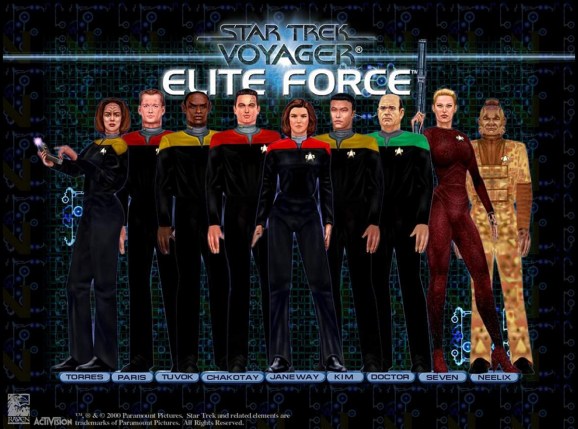 Wow! The look so life-like!

Star Trek has been one of the most important franchises in television and film. Its gaming legacy isn’t as great.

The popular sci-fi franchise about human’s exploring the galaxy centuries in the future, is now 50 years old. Its history with gaming is just a little younger. Text-based games about the Enterprise and her crew starting hit computers in the ’70s, followed by arcade and console titles that explored every aspect imaginable from the franchise: exploration, diplomacy, ship combat, and more.

And yet, the best Star Trek game I ever played was a mindless first-person shooter based on the worst show in the series, Voyager.

Activision released Star Trek: Elite Force for PC in 2000. It was just the second game to use the id Tech 3 engine, which first powered id’s own Quake III Arena. This was an exciting time for first-person shooters on PC. New engines like id Tech III and Unreal Engine were dramatically improving 3D graphics. At the time, id Tech III was top-of-the-line.

Gamers had a taste of it with Quake III Arena in 1999, but that title was multiplayer-only. Elite Force gave us our first single-player experience that showed off the new engine. The plot was simple: Voyager gets trapped in a ship graveyard. You’re a part of a special security force that has to save the day. City on the Edge of Forever it wasn’t. 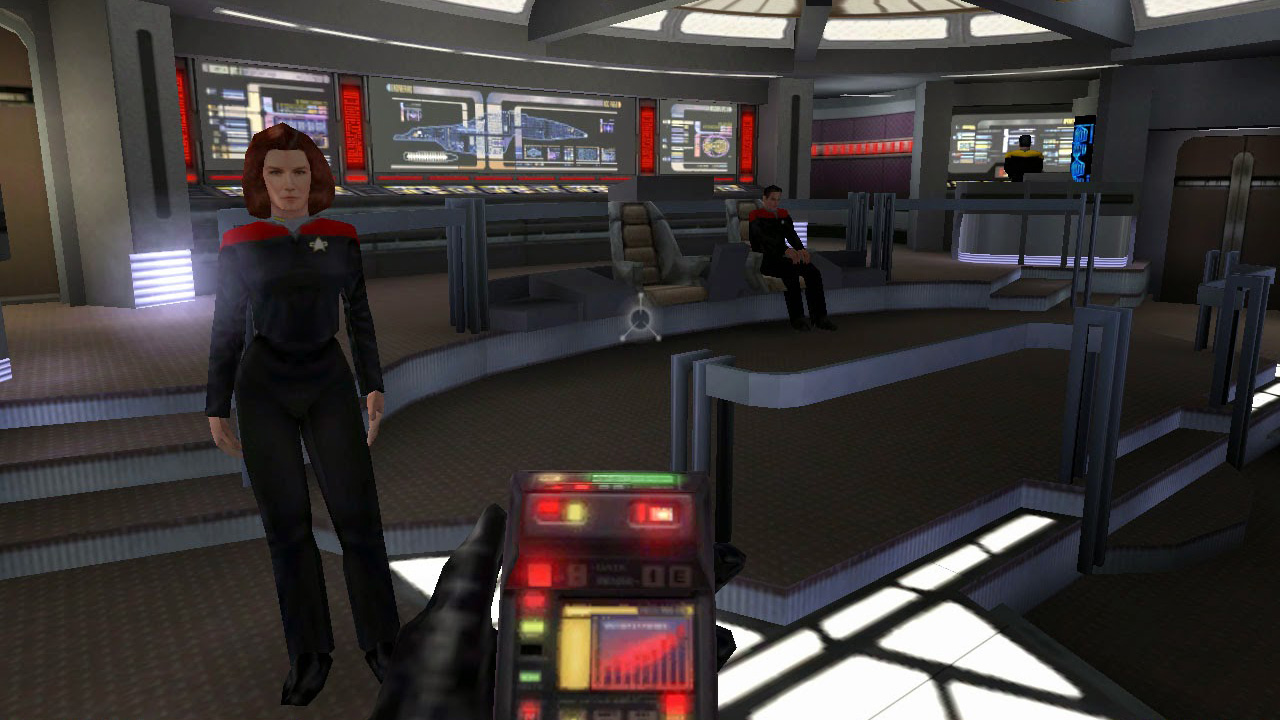 Above: It’s fun to just get to walk around the bridge.

However, developer Raven Software’s execution was fantastic. Environments and character models were faithful to the show. They even had the entire cast involved and voicing their respective characters (Seven of Nine actor Jeri Ryan initially didn’t reprise her role, but she was later added in with a patch). More so than any Star Trek game before, you really felt like you were playing through an episode of the show. It’s not surprising that Raven now works on the slick Call of Duty series.

Immersion was a big part of Elite Force’s appeal. Sure, the game was about shooting stuff — it wasn’t mechanically different from pretty much every other FPS from the time. But the Star Trek flavoring always shined through. More than anything, fans just want something that makes them feel like they’re living in the franchise. Raven knew this. When it made an expansion for Elite Force, it didn’t add significant single-player content. Instead, it allowed players to walk around the entire Voyager ship. For fans like me, this was fantastic. Even today, my ideal Star Trek game would open up an entire ship to explore.

Despite my love for it, Elite Force is not an all-time great game. And that’s what shocks me with Star Trek games. We’ve had plenty of good ones, but none of them have been fantastic. I know some people hate it when anyone compares Star Trek to Star Wars, but it works here as juxtaposition of two popular sci-fi franchises that have often been adapted to video games. Where is Star Trek’s Knights of the Old Republic? 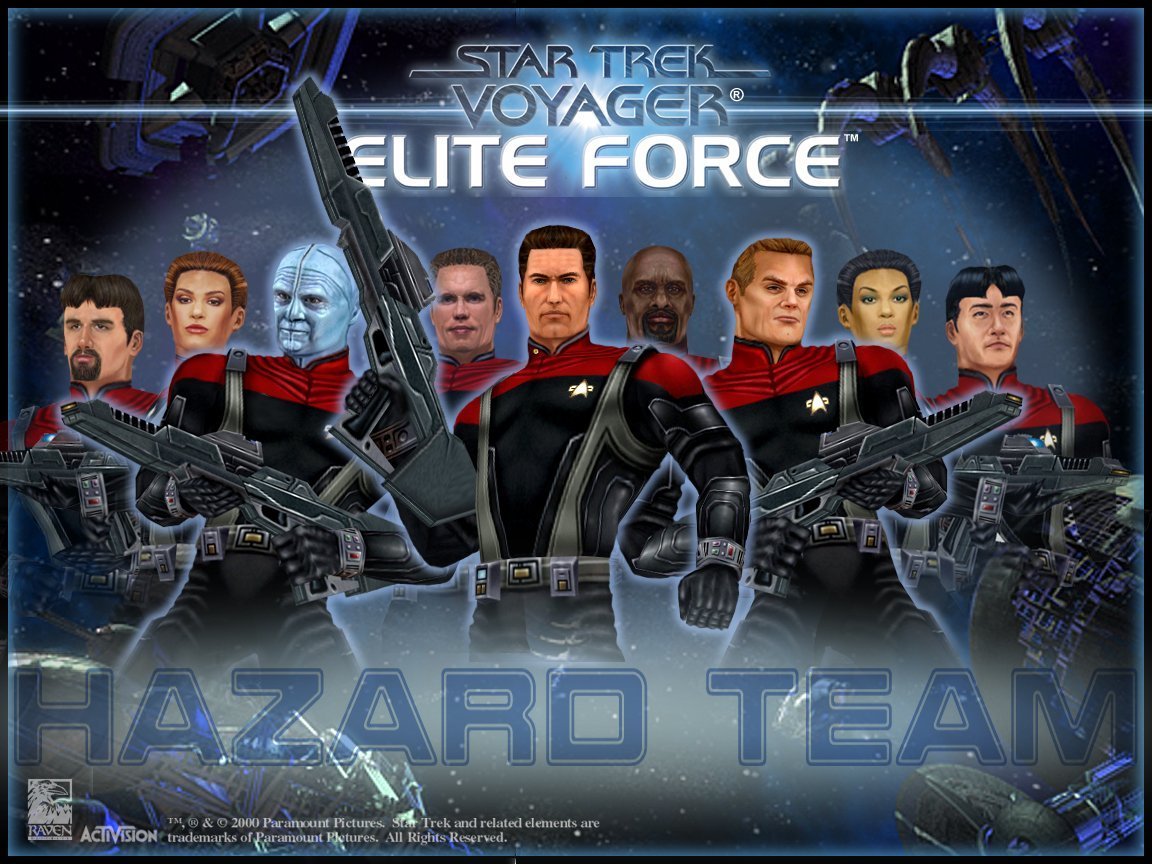 Above: The actual Elite Force.

Elite Force had a sequel, but I never enjoyed it as much as the original. The first Elite Force came out at a perfect time. First-person shooters could still get away with being on the basic side. It wasn’t the tired, worn-out genre that it sometimes feels like today. This was before Call of Duty and Halo. Elite Force was one of the first games to use the id Tech III engine. Elite Force II in 2003 was one of the last.

I still hope that one day we’ll have the Star Trek game. Right now, Star Trek Online is still operating on PC and just released a console version. It also recently got a new expansion, Agents of Yesterday, that added new content based on the original series. Timelines, the Star Trek mobile role-playing game, is adding new ships to celebrate the 50th anniversary. We’re also getting a Star Trek game for virtual reality that looks promising for anyone who owns the expensive equipment you’ll need to run it.

But right now, if I was going to play a Star Trek game to celebrate the 50th anniversary, it would be Elite Force. It’s just a shame that you can’t easily buy a digital copy these days.