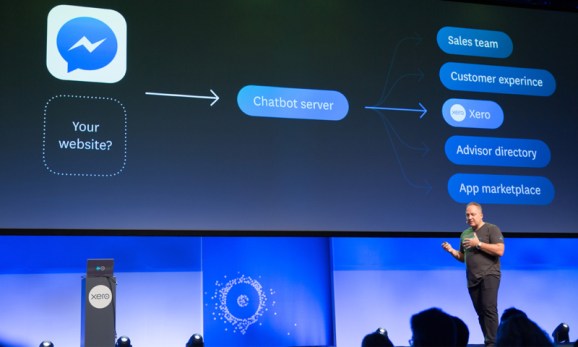 The more than 700,000 users of small business accounting software Xero will soon have a Facebook Messenger bot to access their business data and help them hire financial professionals. Plans for Slack and Apple iOS bots were also announced today.

The bot codenamed Hey Xero will make its debut later this year, the company said in a statement.

“Using Hey Xero, businesses will be able access the Xero Advisor Directory and be recommended a suitable accountant or bookkeeper in their area. Xero subscribers will also be able to discover new apps in the Xero ecosystem and query their latest financial data, such as who owes them money or when their next bill is due,” the company said.

The Xero bot announcement was made at Xerocon South, a gathering of more than 2,000 accountants, bookkeepers, and financial professionals from Australia, New Zealand, and Asia.

The cloud-based New Zealand company has raised more than $110 million to fund expansion into U.S. and U.K. markets. Plans for a U.S. IPO were delayed in 2015, according to Reuters.