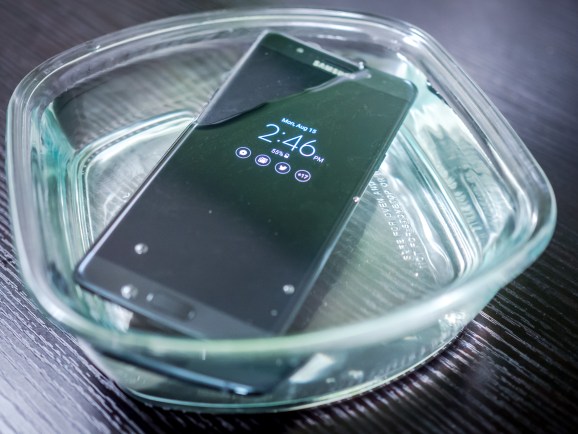 Testing the water resistance of the Samsung Galaxy Note7.

Following Samsung’s announcement that it will replace Galaxy Note7 smartphones weeks after their release, today the U.S. Consumer Product Safety Commission issued a statement warning of the device’s potential health hazards. This comes after multiple people have documented cases of the phone’s battery exploding.

“Lithium-ion batteries pack a lot of power into a small package. When these batteries overheat and burst, the results can be serious. This is why the U.S Consumer Product Safety Commission (CPSC) is urging all consumers who own a Samsung Galaxy Note7 to power them down and stop charging or using the device,” the federal agency said.

Samsung is working with the CPSC to make an announcement about a full recall, the agency said in the statement. The device maker has already said it will replace Note7 handsets, but the CPSC said it’s “working quickly to determine whether a replacement Galaxy Note7 is an acceptable remedy for Samsung or their phone carriers to provide to consumers.”

In a statement of its own, Samsung said it’s collaborating with the CPSC on a “voluntary corrective action plan to expedite a US recall of the product.” An executive quoted in the statement directs people to turn off the phones and exchange them. The company will ship replacements following the CPSC process, but in the meantime, people can instead receive other devices — like a Galaxy S7 or S7 edge — along with a refund of the price difference.

Yesterday the U.S. Federal Aviation Administration (FAA) strongly urged people not to use the phone while in flight.

This news comes two days after Apple unveiled its newest iPhones, including the 5.5-inch iPhone 7 Plus that will compete with the Note7 in certain ways. (The Note7 has a stylus; the iPhones don’t.) Samsung had more smartphone shipments than Apple in the second quarter of this year, according to IDC data. The Note7 had a chance to be considered one of the best alternatives to the iPhone 7 Plus, which does not have a headphone jack. So the phone’s proverbial meltdown — which comes after very positive reviews — could not be coming at a worse time.