Social media and the tech paparazzi have blown up with anger, ridicule, and innuendo over Apple’s removal of the headphone jack. Chris Taylor of Mashable says it’s stupidity. Jacob Kastrenakes of The Verge says it’s a business decision, which is probably code for greed. Others say hubris or a gateway to make digital right management for media ubiquitous, and some say it’s the right move, but just too early.

The simple fact, however, is that Apple is a company constantly in the pursuit of perfection. 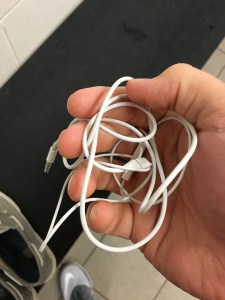 Above: “I love cables,” said no one ever.

It may not be your perfection, and you may not become a customer because Apple’s vision diverges from yours, but that’s what drives the company. And let’s face it: Tangled headphone cables are not anyone’s idea of perfection. I can’t count how many times I’ve had to untangle mine, and I’m guessing the same is true for you.

So was it courageous?

The simple reality is that when you make big bets like this in business, you risk big.

iPhone is Apple is a very real way. The smartphone lineup has consistently contributed between 60 to 70 percent of the company’s revenue since early 2015, and well over half for the previous three years.

Screwing up this cash cow means massive risk for Apple and its executives. You don’t take steps like this lightly.

So, whether you like it or not and whether you’ll buy it or not are kind of irrelevant. It was an enormous risk. Apple — and specifically CEO Tim Cook — took this risk. And they’ll sink or swim based on the results.

(For the record, I’m personally in favor. I like the decision, and I like the prospect of never fighting earbud and headphone cables again. And I can’t wait for wireless charging as well. And I predict that iPhone 7 is going to be a tremendous hit for Apple. But that’s another matter.)