Technology never likes us to stand still. It’s always moving forward, but I’d like to hit pause for a moment and take us into the past. I’ve compiled my list of the top 25 tech movies of all time.

Technology in movies used to be a bit of a joke. But with the advent of awesome computer animation, it’s no longer outlandish to execute someone’s vision of the future in a movie. Now sci-fi writers and tech creators can use movies to paint the road ahead and inspire millions of people to make their visions into a reality. These movies, as luminaries such as Mark Zuckerberg have learned, are also a way to get a particular view of tech history established as the official view of how something like the creation of a company went down.

In many of the movies, the theme is the dangers of new technology. These films ask ethical questions, like what it means to be human or what the difference is between a human and an android. Many are about making our wildest fantasies come true, or paint hackers as the knights who will take on corporate dragons. The themes harp on the need to get off the grid and to return to a more innocent time. The best films are a kind of distant mirror, reflecting on our society by giving us a glimpse of its future.

Back in 2012, I created a list of the top 25 technology books of all time. At the time, I wanted to follow up with the top tech movies list, but it took me a while to do it. Clearly, this is a subjective list. I’ve included a poll at the bottom, in case you want to vote for your favorites. Of course, if this list included TV shows, I would add HBO’s Silicon Valley series. But that’s probably another list. We certainly have high hopes for Snowden, the chronicle of whistleblower Edward Snowden that debuts on September 16. You can vote on your own favorites in our poll. 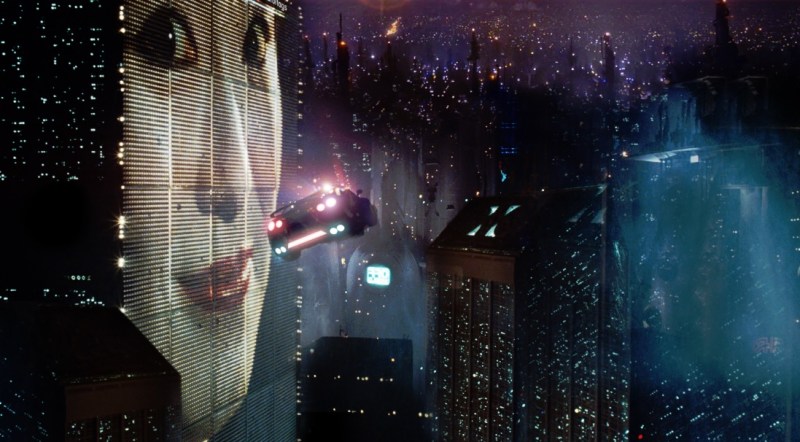 Above: Los Angeles in 2019 was one of Blade Runner’s finest creations.

1. Inception. (2010). Inception masterfully blends illusion and reality until you can’t tell the difference anymore. Director Christopher Nolan casts Leonardo DiCaprio as a thief who pulls off his capers by infiltrating his target’s subconscious mind. Once inside, he implants an idea into the person’s mind via “inception,” an idea that the person then adopts as their own. The film takes the idea of “lucid dreaming” and runs with it, leading to some of the coolest special effects in any movie. A scene will appear to be real until you notice it is warped in some way, because the human mind doesn’t create seamless dreams. Reality gets really weird when it becomes possible to dream within a dream and to fool someone so completely that they need some kind of stabilizing token to tell them when they are truly living in the real world instead of in a dream world. When you combine the technology of illusions with the plot of corporate espionage, you get a truly mind-bending movie. I can see a day when you’ll have to live inside a virtual world and try to figure out how to tell what’s real and what’s not.

2. Blade Runner. (1982). Harrison Ford plays Rick Deckard, a Blade Runner whose job is to track down cloned humans, or “replicants,” who have deviated from their original missions. The film’s depiction of Los Angeles in 2019, with flying cars and a heavy Asian influence, is a study in creating a sci-fi world that is rooted in reality. Deckard uses a Voight-Kampff machine to distinguish whether a subject is a replicant or a human, based on their emotional responses to questions. The quest leads Deckard to eye-ball manufacturers and futuristic strip clubs before he finds his targets trying to break into the evil Tyrell Corp., where the ultimate creator awaits. The film incorporates elements of film noir, like the femme fatale, cynical narration, and dark cinematography. It warns that the day is coming when technology will be able to reproduce us and we’ll have to decide what rules to live by when that day comes. It also questions the morality of playing God, and how far to take technological innovation. Like a modern-day Frankenstein story, it questions the line between what is human and what is not. I also liked the additional clues about Deckard’s identity in the Director’s Cut, released in 1992. I don’t know if the world of Los Angeles in 2019 will come to pass, but we still have a few years left to create flying cars.

3. Avatar. (2009). James Cameron’s Avatar was a massive $310 million production that transported us into a whole new world. The planet Pandora is a living Gaia supported by native inhabitants known as the Na’vi, which are represented as 10-feet-tall, blue-skinned creatures. Humans from Earth invade the planet to steal its resources, and the resulting conflict is analogous to any battle between colonists and indigenous peoples. The high-tech helicopter gunships of the humans go up against the flying dragons of the Na’vi, and the results are spectacular. Caught in the middle is former Marine Jake Sully, who has lost his legs but can transport himself into the body of a Na’vi via avatar technology. It’s a classic tale of traditional tribes against technological imperialism. And while Jake straddles both worlds, it’s easy to fall in love with the world of Pandora and the ways of the Na’vi.

4. Minority Report. (2002). You could argue that this movie contributed to more Silicon Valley startup plans than any other work of fiction, except Neal Stephenson’s novel Snow Crash. In the year 2054, the police stop major crimes using precrime analysis, which predicts the crimes before they happen. Tom Cruise, playing precrime chief John Anderton, sniffs out the clues with the help of his gesture-based, transparent, screenless, holographic 3D computer. He grabs clues and arranges them in mid-air, inspiring the vision for augmented reality and virtual reality. Director Steven Spielberg consulted with sci-fi authors and technologists in creating his version of life in 2054. That vision turns out to be more Orwellian than utopian, as there’s more to the precrime division than the analytics experts let on. While the movie was forgettable, the gesture-based 3D computer was awesome. So was the retail kiosk that recognizes Tom Cruise’s character when he walks into the store.

5. The Matrix. (1999). We know how deep this rabbit hole goes. The Matrix has had a huge impact on pop culture, as the debut movie in the Wachowski brothers’ trilogy about an alternate reality that exists right under our noses. The Matrix posits that our world is an illusion, a computer simulation meant to keep us all docile while sentient machines farm us for our energy in rows and rows of vats. Neo, a computer hacker played by Keanu Reeves, is lured away from this subjugation by Morpheus (Laurence Fishburne). This cyberpunk film introduced ideas like “bullet time,” wall running, and artificial reality — thereby influencing a generation of video games, novels, and other movies. It was also wildly imaginative, as the filmmakers discovered that when your mind is creating the scene in front of you, anything can happen in that scene.