And the worst tech movies of all time: 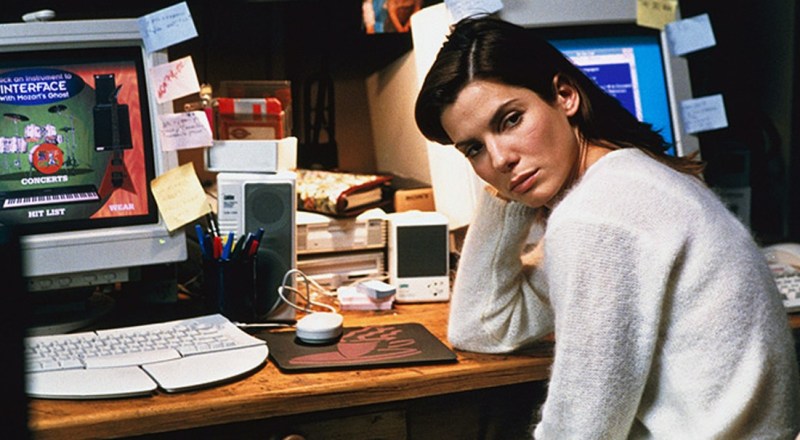 Above: Sandra Bullock in The Net.

1. The Net. (1995). Sandra Bullock plays Angela Bennett, a computer-savvy analyst who gets into trouble with Mr. Wrong. He tries to wreck her life by going online and ruining everything he can, from erasing her social security number to invalidating her credit cards. It’s revealed that he’s a contract killer working for cyberterrorists. But he turns out to be a little too all-powerful. He’s evil enough to inspire you never to turn on a computer or use a credit card again. Of course, if you made this movie today, the omniscient hacker ruining someone’s life wouldn’t be so far from the realm of possibility.

2. Total Recall. (1990). In 2084, construction worker Douglas Quaid (Arnold Schwarzenegger) has troubling dreams. So he visits Rekall, a company that implants memories of a dream vacation. He is transported to Mars as a secret agent, but then he’s drawn into a conspiracy to overthrow a real gangster in charge of the Mars human colony. The theme of what’s real and what’s not is a good one, but the action that plays out on Mars is laughable, including the part where Quaid manages to save his own life and create an atmosphere on Mars at the same time. That sort of science seems a bit far-fetched.

3. Antitrust. (2001). This is the story of a software company CEO, Gary Winston (played by Tim Robbins) who steals code and tries to cover it up by murdering coders. One coder catches on and tries to expose the whole sham, but then he has to flee the CEO’s ever-growing reach. Film critic Roger Ebert speculated that Winston was modeled after Microsoft cofounder Bill Gates. The one good thing about the film was that it had a pro open-source theme.

4. The Pirates of Silicon Valley. (1999). This film depicts the real-life rivalry between Apple’s Steve Jobs (Noah Wyle) and Microsoft’s Bill Gates (Anthony Michael Hall). It’s a classic contrast of the counterculture embraced by Jobs and the corporate ruthlessness embraced by Gates. But the movie compresses so much of the rich history into a B movie drama. It’s one of those cases where real life is better than the movies.

5. The Matrix Revolutions. (2003). The battle of the machines and the humans reached its climax in this third part of the trilogy, but it turned out to be far less satisfying than expected. The ending of the brilliant series was annoying and incomprehensible. A true letdown. It’s such a disappointment, considering that The Matrix was one of the greatest films of all time, and The Matrix Reloaded was equally imaginative.

6. Starship Troopers. (1997). This was one of the finest sci-fi action novels ever, but it got turned into campy, gung-ho mush when they made it into a movie. The Silicon Graphics-created super bugs were cool, but the story of jarheads exterminating bugs was disturbing and militaristic. It was so bad that, yes, they had to spice it up by having the cadets take co-ed showers together.

What is your favorite tech movie of all time?