When you’re describing a business or piece of software, it’s often best to explain it in relation to something familiar. If I were explaining the concept behind Uber to someone, I’d say, “It’s like using a taxi, but you can summon it from your phone.” In a similar way, if I were trying to describe VReal to someone that was unfamiliar, I’d probably say, “It lets you stream VR games better, using platforms like Twitch,” and that’s relatively accurate. For the most part.

But the mere tagline of “Twitch in VR” also downplays what VReal is doing that makes it stand out from just being an easier-to-use portal for putting VR content into an existing platform like Twitch or YouTube. While on the surface it provides a more intuitive, entertaining, and feature-rich experience for both content creators and viewers while streaming VR, it also provides a whole host of one-of-a-kind features as well that most people haven’t seen in action yet.

Last weekend at PAX West, VReal invited UploadVR to its office to check out some of these new features, and the possibilities are pretty exciting.

The last time we caught up with what the folks at VReal were working on, we saw its livestreaming services in use. It could put players into a game with a streamer — while they’re inside VR — and enable them to hang out in the game together, chatting with their voices. The streamer could beam that content to their standard 2D-monitor viewers, like usual, but it provided a more social and engaging way of viewing content. 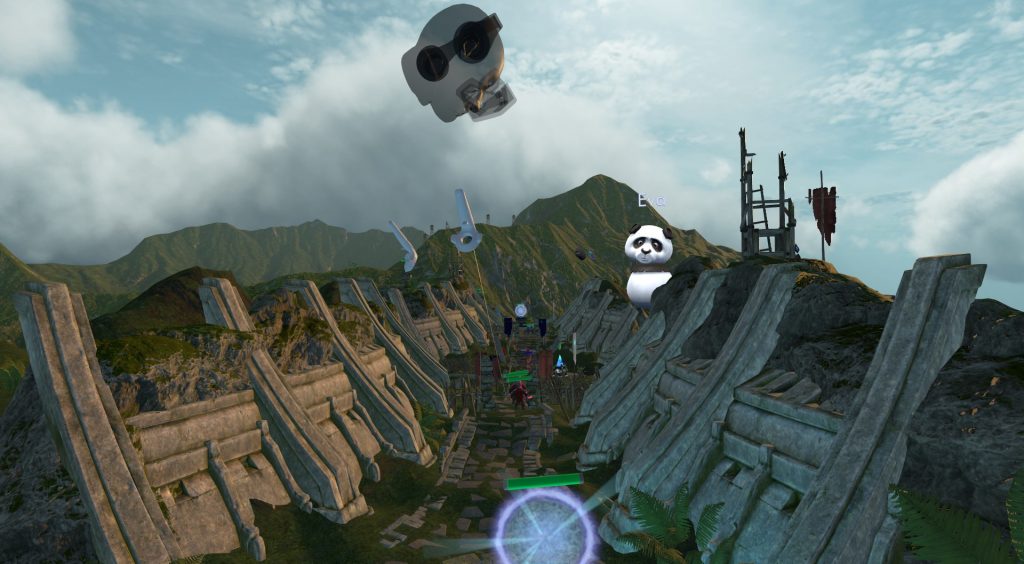 Above: Come on, you’ve always wanted a panda to watch you playing games in VR.

“We’re building a platform with tools for people that have shown us if you give them a little bit of support, they can create these amazing streams and communities out of thin air,” said VReal CEO Todd Hooper during our interview. “If you go and look at popular Twitch channels or YouTube channels they are propelled by the strength of personalities and one person’s ability to craft an audience and community around them.”

VReal has taken that core concept and expanded it exponentially by introducing virtual cameras into the mix. Before having a stream go live, a broadcaster can set up one or more cameras in fixed locations within a game scene. Streamers can then switch to different camera angles on the fly, allowing for a much more cinematic and tailored viewing experience.

If you bring additional friends and team members into the application with you, you could theoretically have a camera squad accompanying your stream — shooting and filming just like in a live action talk show you might watch on television. In this way, it’s less like “Twitch in VR” and more like “broadcast television, in Twitch, for VR,” but that doesn’t really roll off the tongue as nicely.

It’s an impressive feature that further expands the ways VReal is going to impact the livestreaming landscape for VR gaming content. Instead of just viewing a feed of what a single eye in an HMD sees — which is either disorienting or nauseating — streamers can create a much more tailored and specific viewing experience. Streams can even be archived automatically in 360-degree video for later viewing.

It’s not a competitor with Twitch or YouTube, it’s designed to enable better VR content within those platforms. “Our approach is more like, ‘Hey, this is VReal, this is what it does, what would you like to do with it? What would you like to add? What do you need for your community to grow and have a profitable business?” explained Hooper.

You can find more information about VReal and their plans on the official website, as well as sign up for notifications when new updates are live. A beta is scheduled to launch in late 2016 and will be useable on a variety of VR devices, from the Oculus Rift and HTC Vive to the Samsung Gear VR and more.