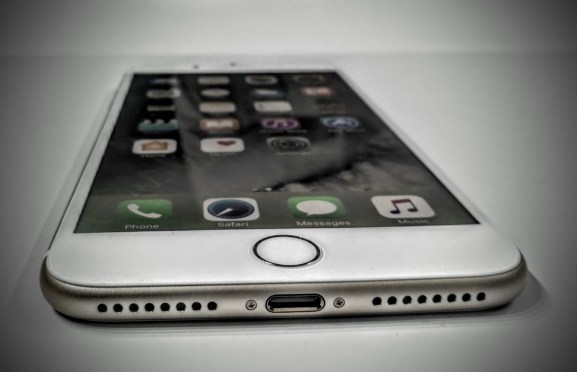 No headphone jack to see here.

If every iPhone 7 and iPhone 7 Plus comes with Lightning EarPods and a headphone jack adapter in the box, then we’re all good, right? Well, no. Not quite.

But what about the Lightning EarPods? They’re a headache just waiting to happen, too. They won’t work with any device that doesn’t have a Lightning port. When you lose them, you’ll have to buy an extra set of the milky white earbuds from the Apple Store, only to lose them again — and buy new ones, and lose those, and on and on. Just like the original earphones that came with your old iPod.

Wireless headphones will work over Bluetooth. But not everyone has a pair. They can be expensive, the sound quality isn’t always perfect, and it’s not hard to get out of range when you’re wearing them. Then again, wireless headphones outsold wired headphones in the U.S. in June. Should you buy a pair? Should you wait? Ugh.

Over time, more third-party Lightning headphones will show up on the market. They’ll be interesting because they won’t require that damned adapter. At some point you may ask yourself, won’t some of these outperform the regular Lightning EarPods? Maybe they will. But the fact that you’ll be starting from scratch in terms of what works with this jack — and just to accommodate your phone, never mind your other gadgets! — is simply a bummer.

Apple has behaved this way in the past. The company started moving away from its proprietary Apple Desktop Bus (ADB) protocol after 12 years of use in 1998. In 1999, Apple came out with devices featuring its FireWire standard, only to drop it after 12 years in 2011. Apple introduced the 30-pin dock connector with the iPod in 2003, only to drop it 11 years later in 2014.

Apple is not the only computer and mobile device maker to adopt USB-C in place of USB-A or micro USB, but it is one of the first to ditch the headphone jack. (It’s not the first, though. Lenovo announced the Motorola Moto Z sans headphone jack in June.)

In other words, Apple devotees are used to this sort of thing.

But still, c’mon, this is the headphone jack we’re talking about. The modern 3.5mm jack has been around since the 1960s. Its predecessor, the quarter-inch, 6.35mm jack, emerged in the 1870s, it seems. Many people have splurged for high-quality cans over the years. They won’t be useless, but they will require an adapter every time. If you want to use different headphones, you’ll have to find the adapter first.

All these thoughts make me anxious. Why can’t Apple stick to what’s worked for more than a century? Steve Jobs’ often-used line “it just works” can fairly be applied to the headphone jack. Yet here is Apple dropping it.

My colleague Emil Protalinski warned us last year that it was “inevitable” Apple would do this. Yet that doesn’t make me feel any better. It’s just as the Verge’s Nilay Patel said — a headphone jack-less iPhone is “user-hostile and stupid.”

To make things even worse, Phil Schiller, Apple’s vice president of worldwide marketing, didn’t even apologize when he broke the news about the lack of the jack onstage on Wednesday. He talked about Apple’s courage. It all just rubs me the wrong way.