Now it’s no longer in beta following the beta release in June.

The IDE comes with Swift 3, the latest and most performant version of Apple’s open source programming language — developer previews of Swift 3 have been out since June — along with a Swift migrator to get older code working with the new release and SDKs for the latest versions of those operating systems. That means it supports building Siri extensions and iMessage apps for iOS 10, among other things. 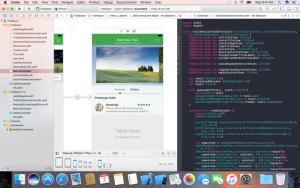 There’s also a new look: San Francisco Mono is now the default font for programming, and there’s a new dark theme named Civic, according to the release notes.

And it’s now possible for use third-party app extensions in Xcode 8. As a result, in a sense it’s more open than all previous versions.

If you already have Xcode installed, you should be able to get this new version running by going to the Updates section and following the instructions. It’s a 4.43GB file, so you may have to wait a bit before it’s done.