Pac-Man is back for another championship.

Pac-Man Championship Edition 2 is out now for $13 on PlayStation 4, Xbox One, and PC, and I’ve played it for around four hours. It brings back a lot of the elements that helped the original stick out while simultaneously burying what made those earlier games so engaging. In this updated version, which follows up the 2007 original and 2010’s Championship Edition DX, you still get the neon-drenched visuals, simple maze gameplay, and short rounds where you alternate between avoiding and eating ghosts. At the same time, this followup doesn’t emphasize the asynchronous multiplayer that made the previous two entries so much fun. In its place, players should expect more stages and more ways to play.

And so far, from what I played on the PC version, I think this game misses the point of the entire series.

Championship Edition 2 still makes it fun to control the little yellow dot-muncher as he shoots down the corridors of various mazes. Like in the previous entries, it’s all about spotting the patterns and figuring out how to get all the dots by taking the most efficient route. After you get accustomed to how the game works, you should end up understanding exactly what you need to do to navigate around the map while getting all of the pellets and ending right back where the fruit spawns to unlock the next maze.

And as you eat those pellets, you’ll fill up a power pellet meter. Once that is maxed out, you can eat that power-up and munch down the ghosts that you’ve been avoiding for big points.

It’s all familiar, but it’s also as solid as it ever was.

A lot of modes and new rule changes

While it’s a lot like what came before, publisher Bandai Namco mixed up the action by introducing a number of new features.

Most notably, you’ll find 10 different game types in the Score Attack menu alone. Each of those have three different tiers of complexity, and then the player can also mess around with a number of options for even more variation. This sequel also has an Adventure Mode where players take on a series of challenges that lead into boss battles.

The publisher also changed how some of the basics work. For example, you can run into the ghosts a couple of times before they are become deadly. If you run into them multiple times in quick succession, they’ll jump into the air and land back in the maze in a few seconds in their fatal form. If you avoid them long enough, they’ll return to their standard, mostly harmless incarnation. A lengthy tutorial explains all of these changes and it really highlights how much is different.

The leaderboard is hidden

For me, the Championship Edition games were always about one thing: competing for high scores against my friends. When the original hit the Xbox 360 in 2007, it felt like everyone was on Xbox Live, and the game wisely displayed the leaderboards so that you couldn’t miss where you stood in relation to everyone else on your friends list. Pac-Man Championship Edition 2 doesn’t do this.

The leaderboard doesn’t immediately pop up after you finish a level. Instead, you have to go back to the stage select to find it, and then you have to cycle through a few filters before you can see where you and your buddies rank. In previous games, players would see where they rank after every attempt. That would mean that if they had a higher score than their friend, they could send a message to talk smack about it. That would naturally keep people playing and returning regularly to improve their score. Championship Edition 2 is not conducive to that type of multiplayer action. That’s a shame. 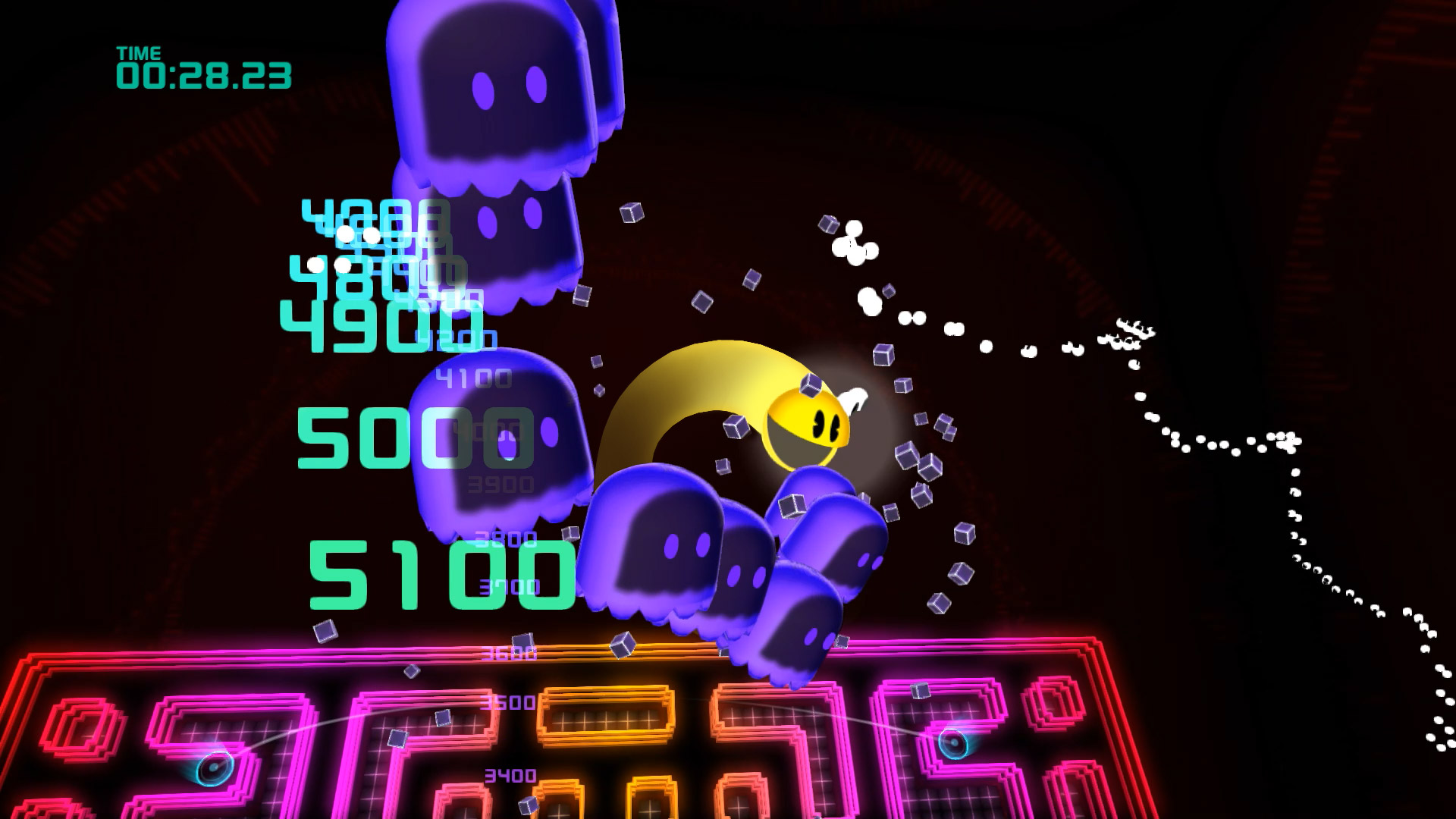 Above: Pac-Man Championship Edition 2 goes into cutscenes when you eat a train of ghosts.

Since DX debuted in 2010, leaderboard-style games like this have made some big strides forward. One of the most basic improvements is an ever-present display that tells you who is right ahead of you for the high score among your friends. Geometry Wars: Retro Evolved 2 has this, and so does Trials: Evolution. Having that name and score hanging above your head at all times gives you goal.

By omitting this, I will have to dive into the leaderboards and memorize the minimum score I need to beat out all of my friends. Again, that is counter to facilitating a fun, competitive environment.

Championship Edition 2 doesn’t emphasis one mode as its clear marquee event. DX had several different play types to compete in, but the developer set up that game so it was obvious that Championship II was were most people should put most of their time. This ensured that the leaderboard was always active and changing as your friends would repeatedly come back and try to improve on their personal bests.

In Championship Edition 2, the menu is cluttered and busy. Yes, this game has a Championship II mode, but it doesn’t stand out aesthetically from the nine other Score Attack modes. And, even worse, Championship II (and all of the Score Attack modes) has has four different versions, and none of them act as the default. I cannot tell if I should try to maximize my score in Single Track, Regular, or Extreme. I really don’t know.

If someone like me (who reveres the Pac-Man Championship Edition franchise) is struggling to figure out where the leaderboards are and which mode I should compete in, then I don’t think this game has a chance of winning over new players. The numerous modes and levels are a fun distraction — but that’s part of the problem: they’re a distraction from what Bandai Namco should’ve made a much more rewarding asynchronous competitive mode.

I still need to put in more time with the Bandai Namco’s latest take on Pac-Man. I also need to see if more people will pick up the game so I have some people to play against. But my early impressions are leaving me feeling championless.

Pac-Man Championship Edition II is out now for PlayStation 4, Xbox One, and PC. The publisher sent GamesBeat a digital PC code for the purposes of this review.