The Tomorrow Children might not be the most polished game of the year, but it can lay claim to being one of the most thought-provoking I’ve seen.

First, let’s get a few truths out of the way.

It is rare that a video game makes you think deeply about what you’re truly achieving within the almost dictatorial constructs of the title itself.

Sure. Almost every game you have ever played is on rails. You may think you’re making choices, but, just as in “The Matrix,” “choice is an illusion created between those with power and those without.”

Games are designed by a team, of course, but in accordance with the vision of an individual. Even games that purport to let you play in the sandbox are constrained by rules, only letting you move forward if you complete the next task. Or shoot all the pigeons.

And yet you play. Mindlessly, at times. Pointlessly, often, unless you count the rush of adrenaline as the point.

It all begins when an experiment designed to unite the minds of humanity goes terribly, horribly wrong. Nearly all life on Earth disappears in an instant, melting into the planet to form “the Void.” Although it looks like a fun snowscape, you don’t want to get too close to the Void, or you’ll sink.

After the failed experiment, and in a move that will surprise nobody who has ever seen a survival movie, a handful of survivors attempt to rebuild civilization. But — as fits the dystopian, post-apocalyptic mold — the Earth has become inhabited by giant beasts known as the Izverg.

Engineers have discovered a way to develop “projection clones,” capable of venturing deep into the Void in search of preserved human DNA, and it is one of these character that you play. Of course, the Soviet theme comes in here — you look like a wooden doll in the game, and the DNA fragments take the form of Matryoshka dolls.

Let’s get one thing out of the way. This is not as polished an experience as we’ve come to expect from Q-Games. The company’s PixelJunk series of titles for the PlayStation stands as a testament to quality, whereas The Tomorrow Children has some issues.

There are clipping problems (especially when it comes to the bus that transports you from the town to islands that appear in the Void) and other technical issues that sometimes frustrate. These have already been noticeably reduced following patch releases, so hopefully they won’t be a problem for much longer.

That said, the game has a unique visual style that is quite beautiful yet mildly oppressive, myopic, and even a little claustrophobic at times. This is perhaps not unlike the West’s view of Soviet Russia.

You will be thrown in at the deep end without an exhaustive “do this, do that” tutorial section. Yes, you’re given a few pointers as to what to do next, but this is a game that forces you to discover how everything works over time. That’s part of the intrigue.

You only ever see other online players fleetingly. They work alongside you but are never actually present for more than a few seconds. It creates an intriguing feeling of knowing you’re not alone but still feeling lonely. 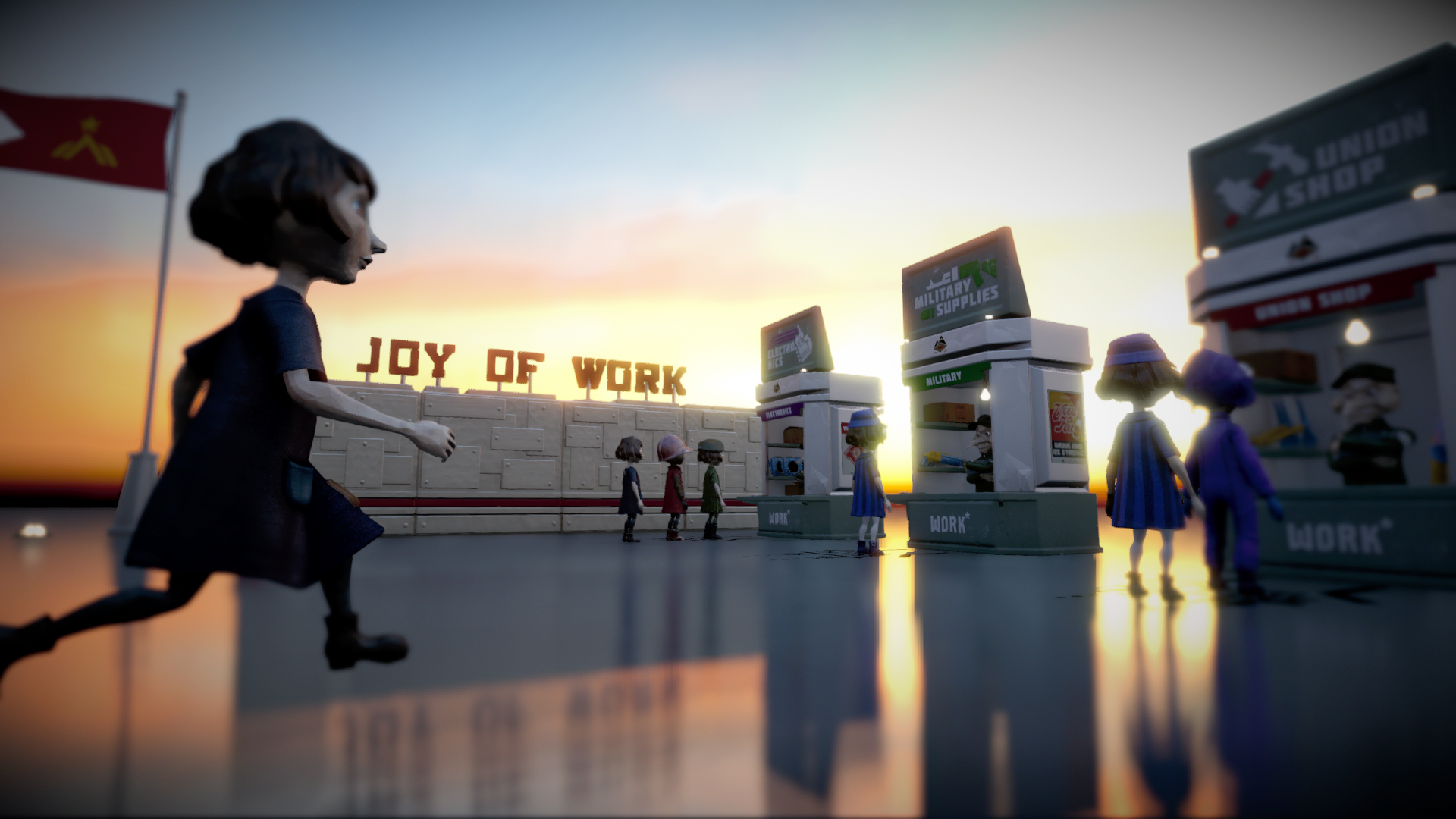 And that seems to be by design. This is a socialist experiment, not a social one. Because you’re undistracted, for the most part, you feel like you need to do something. It seems those of us playing The Tomorrow Children fall into that mindset quickly.

“Our retention numbers are strong, so we are doing something right for most people,” Dylan Cuthbert, CEO and founder at Q-Games, told me. “Also, play times are nice and long — people are spending significant amounts of time exploring around.”

In a town with a good number of online players involved, things start to take shape. There are different classes of worker available, and changing clothes helps increase your stats in that direction. Maybe you’re a miner, traveling on a bus out to an island that has appeared from the Void, ready to dig into the structure in order to find resources and those precious dolls. These, in turn, increase the population of the town (once you have enough resources to build the restoration tower, of course).

Or maybe you’re happy to wait for the bus to return, full of goods, knowing you’ll be the one to move them to their respective piles in the center of town. Or you could be the person who crafts the buildings, erects propaganda posters, and creates turrets to protect the citizens and everything you’ve built. Maybe you’ll just run on the treadmill to keep the lights on.

Complete tasks, check in with the Ministry of Labor, and receive ration coupons in exchange for your toil. I played the Founder’s Pack edition of The Tomorrow Children (a free-to-play version will eventually be launched), which entitled me to some Freeman Dollars, a currency that allows you to trade on the black market for better equipment. That is a classic free-to-play mechanism, of course. Toil away for rations and get there eventually, or buy dollars to save time.

In populated towns, it is remarkable to see how — with no verbal communication and only fleeting glances from other online players — societies form and players organize themselves accordingly.

It is infinitely more difficult if you choose to help resurrect a town on your own, or with just a couple of companions, and that could cause frustration among gamers who are used to a more action-oriented experience, or who simply don’t have the patience, or work ethic, to see things through. Indeed, if The Tomorrow Children is a real social experiment, Q-Games could help employers distinguish the capitalists from the proletariat in real life. 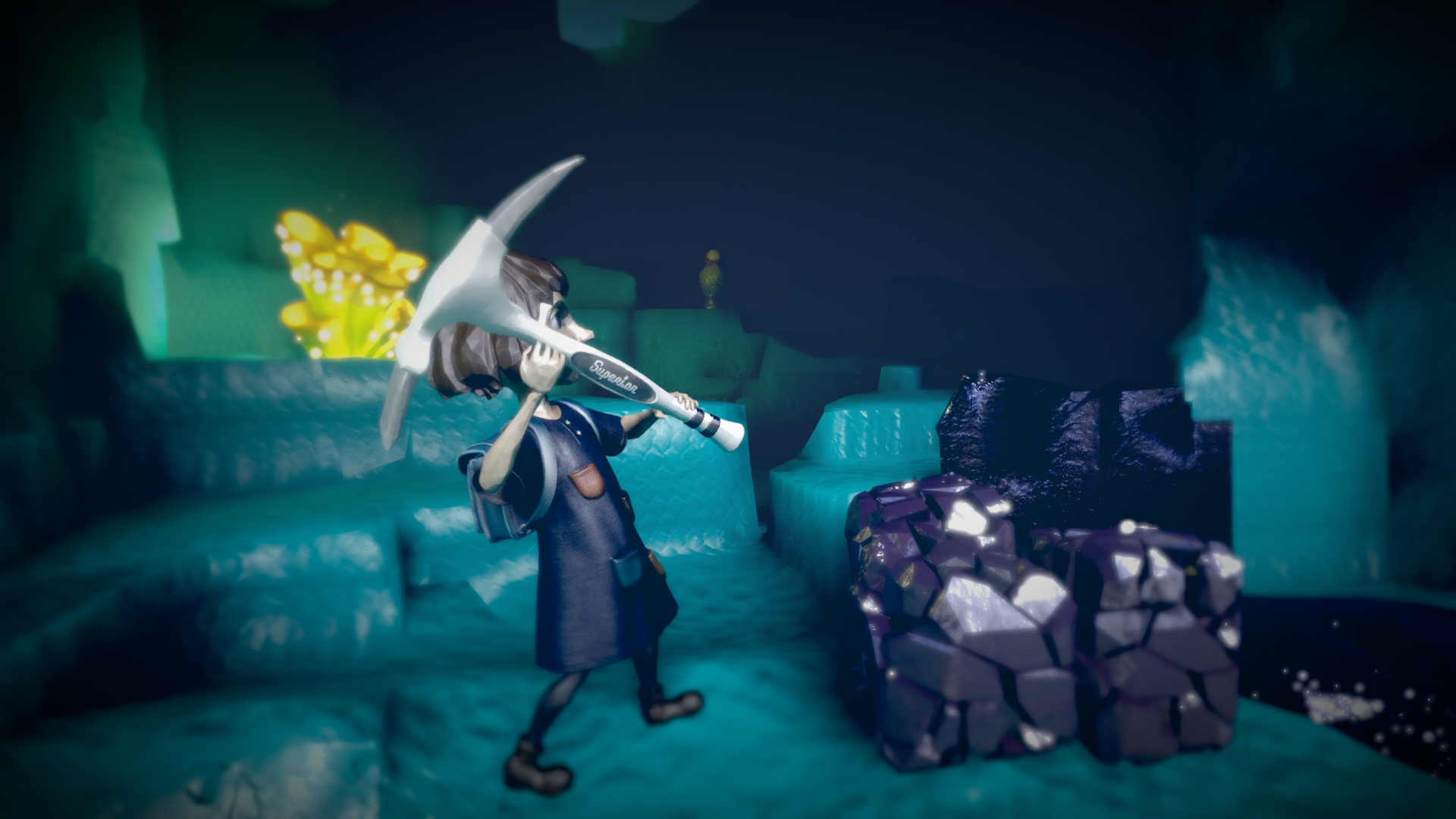 Everything in The Tomorrow Children is designed to remind you of the order of things. When you want to craft something new, you may have to wait in line for it if another online player is using the facility. And you do, diligently. You might have to queue for the shops, the workbench, or the government buildings. You can tell Dylan Cuthbert is a fellow Brit — when was the last time a game made you queue for anything?

But that’s the point.

You have to do things in the right order. You have to wait your turn. You have to get resources, transfer them to the right location, and put them in the right place before you can use them. You have to craft everything you need, and you can’t craft more than the town can currently support, which often means mining more resources.

But as you move forward together, as a team, sharing the load, you get little wins along the way. You celebrate them. They keep you trudging inexorably forward. Finally, the town is built, everything is restored, and you have a victory lap before you head back underground and find a new place to do good work. Everything you do is to support the cause.

“In The Tomorrow Children, the rules are kept quite slim to encourage true freedom of choice in a social setting, with social responsibility,” Cuthbert said. “So when things go right you get an incredible emotional release, because people within those limits worked together and did something they couldn’t do just by themselves.”

All of this is very much like the process of making a video game. This might be Cuthbert’s video game equivalent of Fellini’s “8 ½” or Nolan’s “Inception” — a game about making games, taking you back and forth between the real world and the imaginary.

“Maybe, yes,” Cuthbert said with a smile. “I do think that teams produce things that are greater than the sum of their parts, especially good game development teams.”

The Tomorrow Children is far from perfect, but it is compelling and intriguing. And this is only the beginning.

“Some of the towns I’ve seen in the Void have been remarkable, and they are only going to get more so with the updates we roll out,” Cuthbert said.

If you want a pure Minecraft or SimCity experience, this isn’t the game for you. If you crave action or a fast-paced tower defense game, this isn’t the title for you. But if you want to play something unique, interesting, thought-provoking, and that has a tinge of Gilliam-esque humor (Brazil-period) thrown in for good measure, The Tomorrow Children is well worth picking up. I personally can’t put it down.