A year ago, Advanced Micro Devices reorganized its processor and graphics businesses by creating a stand-alone Radeon Technologies Group to handle all of the design, marketing, and other tasks for its graphics division.

It launched a series of Radeon graphics cards, formed a bunch of virtual reality alliances, and revamped its graphics architecture with the unveiling of its Polaris designs and a new manufacturing technology. And the company is stepping back to look at how much progress it has made today.

In the preceding years, AMD had lost market share to graphics leader Nvidia and processor king Intel. While Nvidia is executing well with the launch of its own Pascal architecture, AMD says it has taken back market share. 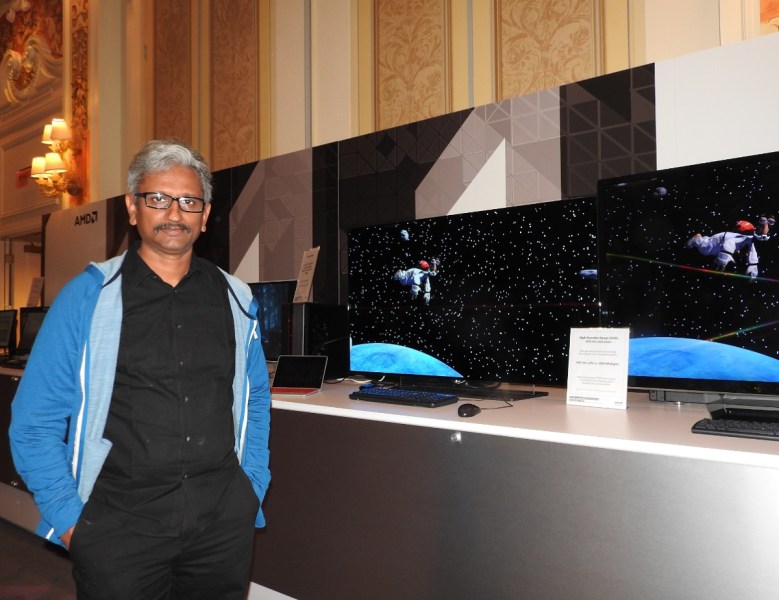 Above: Raja Koduri, head of the Radeon Technologies Group at Advanced Micro Devices.

“We managed to bring the focus back to graphics and turned around the erosion that happened over the last few years,” said Raja Koduri, senior vice president and chief architect of AMD’s Radeon Technologies Group, in a press call. “We are back to a positive trajectory, which was a tremendous effort from the entire team. We have a lot more to do. We have accomplished this turnaround when our competition didn’t make it easy. They have been executing exceedingly well.”

He added, “To put the turnaround in perspective, it has been done in a time when the odds were stacked against us. We have a breathtaking amount of stuff coming.”

Among its big accomplishments, AMD launched its Radeon Software Crimson Edition technology in November 2015. That brought more stable game-ready graphics. Since that time, AMD has delivered 21 Crimson driver updates. In December, it also launched its GPUOpen initiative, providing visual effects tools for developers at no charge. In March 2016, it launched its Radeon Pro Duo graphics cards for enthusiast gamers, and it unveiled its Vulkan driver.

By June, AMD unveiled Polaris, the new architecture based on a 14-nanometer manufacturing process. In July, it unveiled the Radeon Pro SSG professional graphics for workstations. And in August, it said that 101 FreeSync-compatible displays had been unveiled to take advantage of AMD’s latest graphics. More announcements are coming soon, Koduri said.

Asked how AMD will push high-dynamic range (HDR) tech for the PC, Koduri said, “We’ve been working hands-on with the developer community since the Game Developers Conference, where we showcased HDR. It’s great news the consoles are also pushing HDR. That makes the reach for the developer much larger. I’m optimistic we’ll see some good content toward the end of the year but more critical mass happening in 2017.”

He noted that portable VR backpacks are one of the newest innovations, and he expects those designs will show up at the Consumer Electronics Show in January. He said Polaris notebook computers will also be coming soon.

Koduri got questions about the AMD chips in the new game consoles from Sony and Microsoft, but he said he was not allowed to comment on them. And he said that integration of HiAlgo to improve its Radeon software is also coming later this year.