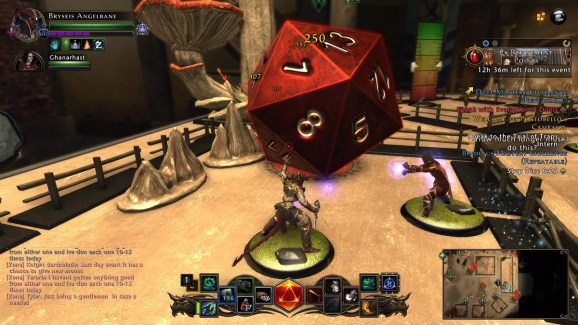 Now playing in Neverwinter: Attack of the Killer D20s!

Dungeons & Dragons is enjoying a spike in popularity and influence unlike anything the role-playing game has seen in its 42-year history, and that’s helping its flagship digital experience surge as well.

Neverwinter now has more than 12 million players on PlayStation 4, Xbox One, and PC, publisher Perfect World announced today. The free-to-play massively multiplayer role-playing game (think World of Warcraft, but for D&D and in its popular Forgotten Realms campaign setting) just hit Sony’s flagship console July 19, and it already has more than 2 million players. It has 3 million on Xbox One, with the other 7 million playing on PCs.

The Cryptic Studios-developed online game launched in on PCs in 2013 and hit Xbox One in 2015. It stands out from the likes of World of Warcraft and The Elder Scrolls Online not just with its D&D-based setting, the Forgotten Realms, and tie-ins with its novels but with regular content updates that go arm-and-arm with the tabletop RPG’s latest storylines, including Storm King’s Thunder, which pits the Sword Coast North against rampaging giants. It also has some interesting special events, such as Portabello’s Game, which takes the MMO and turns it into a tabletop-like experience, with your characters becoming miniatures that slide across the game board, just like they would if you were playing on a slick map with friends around a table in your home.

Lead designer Thomas Foss, who first pitched Neverwinter to Atari years ago, has returned to Cryptic Studios, and he recently talked with Wizards of the Coast’s Dragon Talk podcast about his time coming up with the idea for Neverwinter, Storm King’s Thunder, and more — like his love for Mimics, those monsters that masquerade as treasure chests.