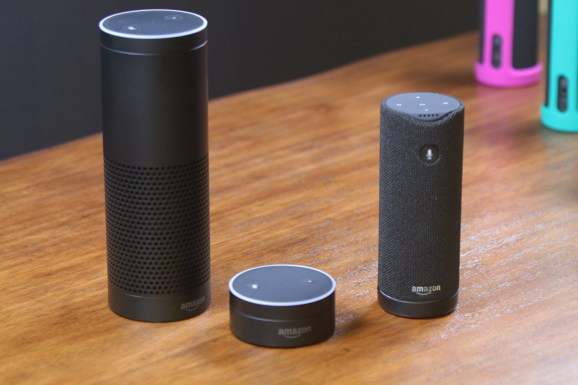 From left to right: Amazon Echo, Echo Dot, and Tap

More than a year ago, people using Amazon Echo devices began asking Alexa, the intelligent assistant within, “Why can’t you distinguish my voice?” said Dave Isbitski, Amazon’s chief evangelist for Alexa and Echo. In this time of super intelligent assistants and metabots, surely it’s technologically feasible for an artificial intelligence-powered chatbot to distinguish commands from, say, a 40 year old woman, from those of her 11-year-old son, and to know that she prefers mushrooms on her pizza while he likes pepperoni. So why hasn’t it become available yet?

Speaking on a panel at the Intelligent Assistants Conference in San Francisco, Isbitski addressed this topic by acknowledging only that Alexa developers were aware of the opportunity. “I can’t speak to any roadmaps or plans,” he said, before adding, “We are aware of the requests by developers and customers.”

Assuming that technology is not an obstacle, it seems that privacy concerns are really the only hurdle, something that was built into Alexa from the beginning and is central to it being an open platform. For instance, when our hypothetical 40-year-old mom orders Domino’s pizza using Alexa, Amazon doesn’t collect any personal information about the customer. Alexa only transmits transactional information to Domino’s. “We take privacy very seriously,” Isbitski explained. “We do not expose any customer information to third parties.”

Amazon extends these same safeguards to the more than 3,000 skills available on Alexa. Skills are set of commands; for instance, there’s one that lets you ask Twitter for trending topics or receive flash news briefings from media outlets like NPR and the BBC. “There’s no sharing of context and history between skills,” Isbitski said.

Yet the sharing of personal information, interaction history, and likes/dislikes is surely on the horizon, particularly as people’s trust in these cute little smart speakers increases. Almost without considering it, many people have already entrusted some of the most intimate areas of their life to virtual assistants: books and music and food, for starters.

Surely what’s next is increased sharing between host and third-party service providers within each intelligent assistant’s ecosystem, whether it’s Amazon’s Alexa, Google’s Assistant, Microsoft’s Cortana, or Apple’s Siri, to name a few. And in the not too distant future, allowing these metabots to speak each other and interoperate will become a much thornier issue.

Ironically, privacy will likely fade as a concern as the Alexa technology further improves.

As consumers continue to place their trust in Amazon, privacy becomes less of an issue. People will embrace the value and convenience of new services offered by devices like the Echo. Describing the success of Alexa, Isbitski explained that consumers have been on a privacy journey: “All of that has happened because of the trust level.”