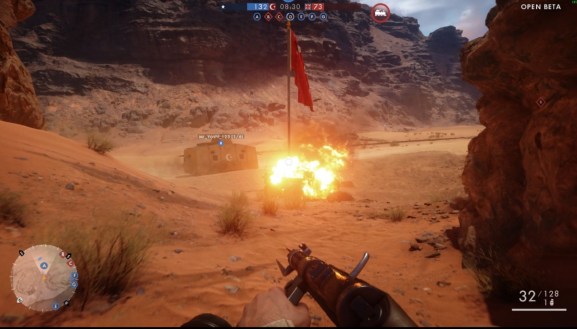 Y’all really wanted to get a whiff of that World War I action.

Electronic Arts revealed today that the open beta multiplayer test for developer DICE’s historical military shooter Battlefield 1 had 13.2 million total players across PlayStation 4, Xbox One, and PC. It was the biggest beta ever for an EA game, and those numbers bode well for the game’s potential success following its October 21 debut. Gaming is a $99.6 billion industry worldwide, and military shooter games make up a significant portion of the console sector of that market.

Testing periods like this are ostensibly tools that enable developers to gather feedback and data about how software performs in the real world. But when it comes to blockbuster game releases, betas also act as teasers that studios design to get consumers talking about and then preordering their products. EA competitor Activision cemented that practice in 2007 with a beta for Call of Duty 4: Modern Warfare. The popularity of that test is one of the major reasons that entry was the first Call of Duty to top the best-seller list in the United States.

But EA and DICE are definitely still using the demo to make tweaks to the final version of Battlefield 1.

“We’re trawling through forum posts, social-media mentions, and digging into some great data,” DICE senior producer Aleksander Grøndal wrote in a blog post. “We’re identifying what worked well, and what didn’t work as well. We truly value your input. In the near future, we’ll have more details on the changes we’ll be making to the full version of the game.”

As an example of the kind of changes Grøndal and his team might make, he pointed out that the light tank vehicle performed “too well.” So expect some prelaunch nerfs.

Finally, DICE put together a full infographic that breaks down some of the stats from the test, and you can see that right here: