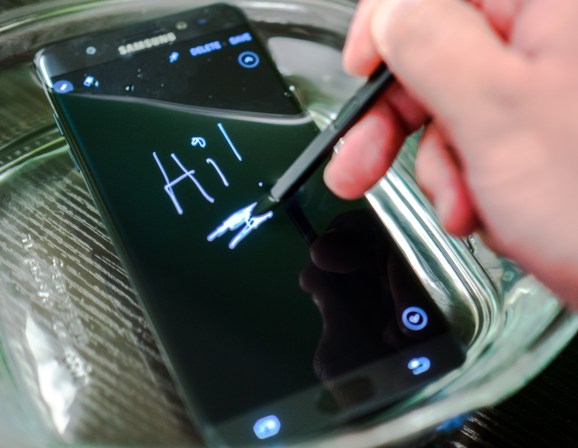 The Samsung Galaxy Note7 S Pen will still work if the phone is immersed in water.

The program applies to devices purchased before September 15 — approximately 1 million of them, the CPSC said.

“The lithium-ion battery in the Galaxy Note7 smartphones can overheat and catch fire, posing a serious burn hazard to consumers,” the CPSC said on a webpage concerning the recall. Samsung received 92 reports of batteries overheating in the U.S., with 55 reports of property damage and 25 reports of burns, the commission said.

Last week the CPSC told consumers to stop using the Note7, which had previously received favorable reviews. Today the CPSC again suggested turning off the devices.

“Contact the wireless carrier, retail outlet or Samsung.com where you purchased your device to receive free of charge a new Galaxy Note7 with a different battery, a refund or a new replacement device. Go to www.samsung.com for more details,” the CPSC said.

Canada and Mexico also have recall programs for the Note7.

The announcement of the recall comes a week after Apple unveiled the iPhone 7 and iPhone 7 Plus.