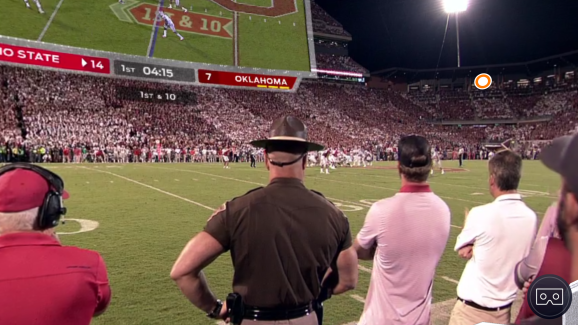 VR gives you the lifelike experience of having someone stand right in front of you during a football game.

Ever since I put on a VR headset, I’ve wanted to use one to watch live sporting events. Well, that tech is here now, and it’s a miserable experience.

During week three of the NCAA college football season, Fox Sports aired the matchup between the Oklahoma Sooners and the Ohio State Buckeyes on its Fox Sports VR App. This smartphone program from developer LiveLike is available now for free on the iOS, Android, and Gear VR markets. For the OSU-OU game, it had five different 180-degree cameras set up around the field. One in each endzone, one on each 25-yard line, and one in a box at the 50 yard line. At any time during the action, you could switch between those vantage points so you can always get in close to the play.

In addition to the live video feed, Fox Sports VR puts you into a digital press box. That keeps the 180-degree view from feeling incomplete when you start looking to the extreme left or right. Additionally, the app beams in a simulated jumbotron that shows the actual Fox television broadcast in order to give you the best of both.

This may sound exactly like the kind of experience you want from a virtual event like this, but I hated nearly everything about it.

Here’s a look at how the Fox Sports VR app works:

Sorry, VR enthusiasts — this is mobile VR only

Fox Sports VR’s biggest sin is its availability. It is a smartphone app, which means anyone with an iPhone or Android device can download it and watch the live video. You don’t need a VR headset to view the content, but you can use something like the Samsung Gear VR or a Google Cardboard phone holder to get a slightly more immersive look at the action. But guess which devices the Fox Sports VR app is not available on: the Oculus Rift and HTC Vive headsets.

It was incredibly frustrating to have to dig out my junky old Cardboard to watch the Big Ten crush the Big 12 when I have both a Vive and a Rift. Once I found my Cardboard, I spent around 10 minutes trying to get my phone to sit in the holster so that I wouldn’t get inadvertent button presses.

When I finally did hold the device over my eyes, the results were underwhelming.

Choppy video, buffering, and baldy down in front

From the 50 yard line, I could see the plays but it was hard to keep the headset steady to prevent the image from shaking. When I did manage to find a steady position, I still found the video feed itself uncomfortable. Most notably, the framerate of the on-field play was too choppy.

Switching between the five cameras also required a few seconds of loading — and every second is precious when you are watching something live and fast paced like football. Almost every time I switched my POV, I missed out on some crucial piece of the action

Oh, and the loading wasn’t the only reason I missed out. One of the 25-yard-line cameras had a row of men standing in front of it the entire game.

Watch football in VR. Alternatively, watch the back of these men in VR! pic.twitter.com/cgxwqFuv9E

On top of all the other pains, my Fox Sports VR stream constantly paused for buffering. I had one “bad connection” error after another whether I was on Wi-Fi or my hyperfast, unlimited 4G LTE connection. I don’t think my connection was the problem, but if it was, it sure would’ve helped if I could’ve used the VR headsets I have connected to my hardwired desktop PC.

A future of VR sports

Despite all of this, I’m not going to give up on virtual sports.

Hopefully, LiveLike learned a ton from this game, and it will make improvements for its next broadcast. It should figure out how to get the cameras up and over the action, and it needs to improve the responsiveness of switch between the various video feeds. And, of course, the overall quality of the video needs to improve.

I also hope Fox Sports VR ends up on the Oculus Rift and HTC Vive soon. It’s understandable why the app is only on mobile right now. Most people don’t own dedicated VR hardware, and 360-video doesn’t do the kind of positional tracking that the PC headsets specialize in. But LiveLike and Fox shouldn’t settle for what it is offering now. If they do, esports like Dota 2 — which are more conducive to VR broadcasting due to their digital nature — could rip even more audiences away from traditional sports over the next five years.