There isn’t enough trash talk in Silicon Valley. But thankfully, hacker George “Geohot” Hotz is ready to supply some, as evidenced in his talk about self-driving cars at TechCrunch Disrupt last week.

As CEO of Comma.ai, Hotz is probably the last person you’d expect to enter the self-driving car market in competition with rivals like Elon Musk’s Tesla (with whom he has a running war of words), Google, Cruise, and others. If anything, he’s going to make that battle of giants more amusing. But he has scored a measure of credibility, as his startup is being backed by Marc Andreessen’s venture capital firm, Andreessen Horowitz. And he’s now preparing to ship the Comma One self-driving car kit, which works with a couple of radar-equipped cars on the market today.

“I don’t belong in Silicon Valley, but I watched the television show, and it made starting a startup look like fun,” he said in his talk. “So here I am today, and of course we have a self-driving car.”

When he was 17, Hotz was the first person to hack the iPhone so that it could be unlocked from AT&T and used with other carriers. And when he was 20, he hacked the security system of the Sony PlayStation 3 video game console. For his accomplishment, Sony greeted him with a lawsuit. He settled that, but not before he posted this hilarious rap video about the lawsuit.

But Hotz is quite serious about solving the machine learning problem in taking sensor data from the environment and turning it into actions that a self-driving car can take to drive safely. He made a phone app, Chffr, in the Google Play store that works with a dashboard camera and is like a “Fitbit for your car,” Hotz said. You record your drives and it feeds the information back to Comma.ai, thereby helping to train the self-driving car.

In December, Hotz unveiled a self-driving car built with off-the-shelf parts and his own custom software. A Bloomberg writer, Ashlee Vance, confirmed that the car drove itself on the I-280 freeway in the Bay Area. He was originally going to do some work under contract with Musk at Tesla, but Hotz and Musk got into a dispute over terms. Hotz has calmed down with respect to Tesla, but he still hammered away at former Tesla supplier Mobileye.

Hotz said, “I hold no ill will toward Elon Musk, and I regret any trouble I caused him in his relationship with Mobileye, which like I said is a failing company.”

Tesla wasn’t happy with Hotz’s Bloomberg interview, and it issued a statement to correct some of the impressions. But this sort of controversy is par for the course for Geohot. (We’ve asked Tesla for additional comment, and will update the story if we receive it. Mobileye declined comment.)

Hotz’s company received $3.1 million from Andreessen Horowitz, and it has used some of that money to create the Comma One, which is a small piece of hardware that replaces your rear-view mirror. 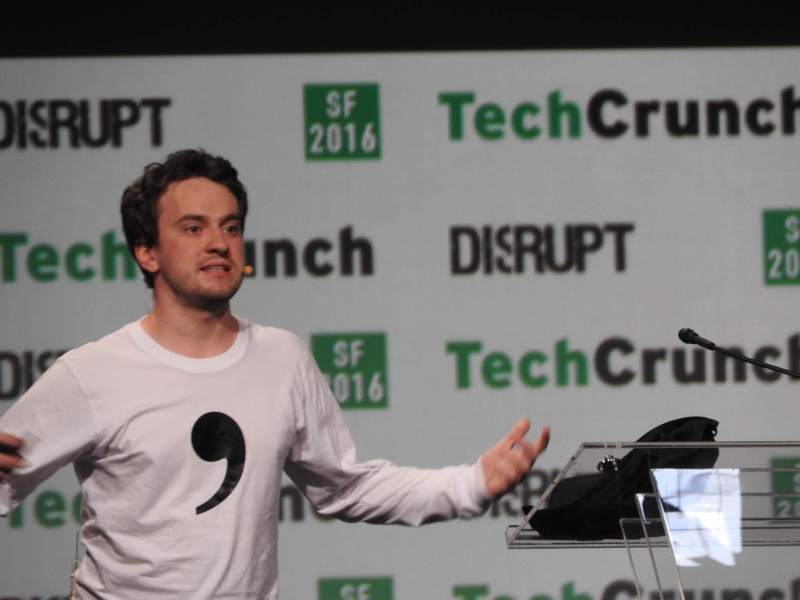 Above: George “Geohot” Hotz is head of Comma.ai.

“You get in the car, press the button, and it will drive you all the way from Mountain View to San Francisco,” Hotz said. “By the end of the year you will be able to buy one of these” for $999. It’s going to be a limited release, with a target on beta testing for Acura or Honda cars equipped with lane-keeping assist. Those cars have front-facing radars. The Comma One has a front-facing camera as well.

Drivers who use the Comma app can earn “comma points” for each minute they drive with the app activated. Those who have the most comma points will reap benefits, such as participating in the beta for the Comma One.

When Hotz issued his challenge to Tesla to compete with his autopilot in a bake-off, Tesla responded with a statement: “We think it is extremely unlikely that a single person or even a small company that lacks extensive engineering validation capability will be able to produce an autonomous driving system that can be deployed to production vehicles. It may work as a limited demo on a known stretch of road — Tesla had such a system two years ago — but then requires enormous resources to debug over millions of miles of widely differing roads.” 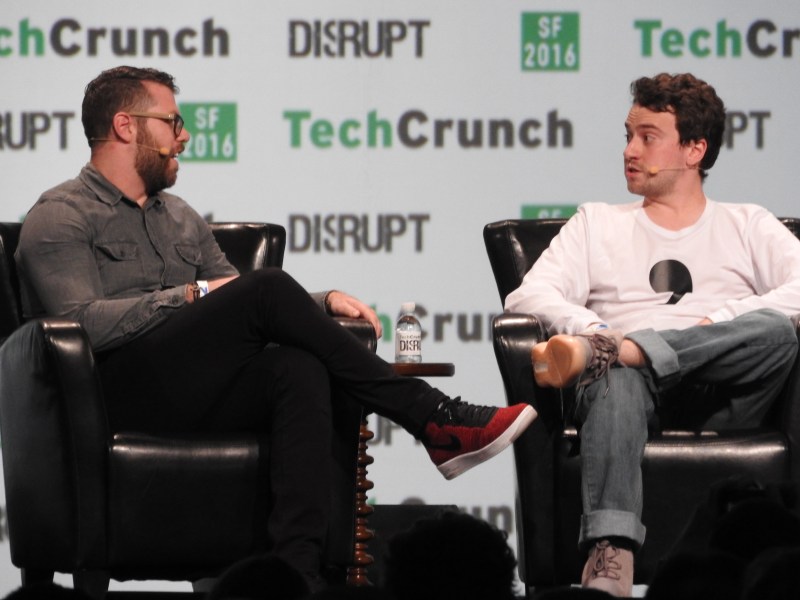 Above: Darrell Etherington of TechCrunch talks with George “Geohot” Hotz.

Tesla added, “This is the true problem of autonomy: getting a machine learning system to be 99% correct is relatively easy, but getting it to be 99.9999% correct, which is where it ultimately needs to be, is vastly more difficult. One can see this with the annual machine vision competitions, where the computer will properly identify something as a dog more than 99% of the time, but might occasionally call it a potted plant. Making such mistakes at 70 mph would be highly problematic.”

And it said, “We should also clarify that Tesla’s autopilot system was designed and developed in-house. Were this simply a matter of repackaging a vendor’s technology, as claimed in the [Bloomberg] article, we would not be unique in offering this groundbreaking experience in production vehicles. If other car companies could meet or exceed the Tesla product by buying an off-the-shelf solution, they would do so. Tesla Autopilot includes radar, ultrasonics, GPS/nav, cameras and real-time connectivity to Tesla servers for fleet learning. Going forward, we will continue to use the most advanced component technologies, such as MobilEye’s vision chip, in our vehicles. Their part is the best in the world at what it does and that is why we use it.” 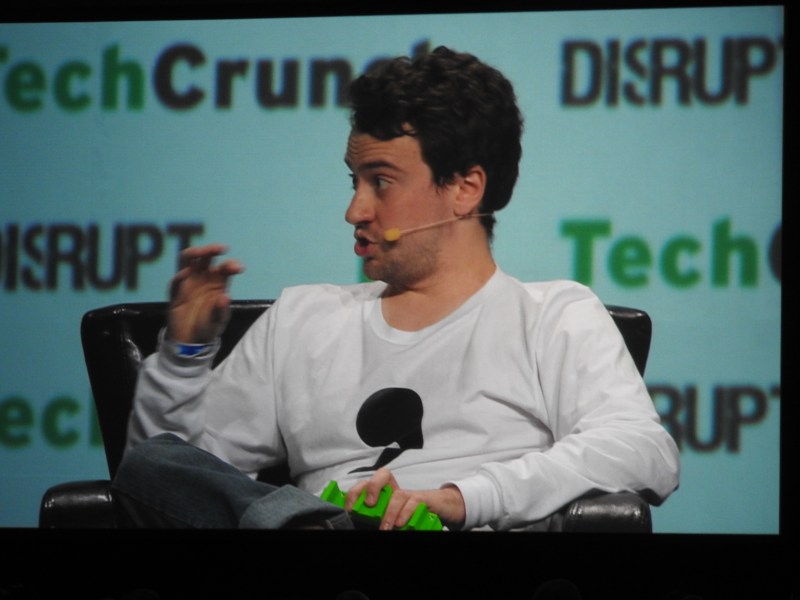 Above: George “Geohot” Hotz says his Comma One is getting good video data from users.

But since that time, Tesla has had its own troubles. A driver in Florida died in a crash while using Tesla’s autopilot feature on May 7. It is also being scrutinized for another crash in China. Mobileye recently parted ways with Tesla, saying that the car company had backed off on a pledge to require drivers to keep their hands on the wheel when autopilot was engaged.

But let’s get back to the trash talk. Hotz said that Google is probably never going to ship its great technology. Otto “was hungry” until they got millions of dollars from Uber. He referred to self-driving car chip maker Mobileye as a “joker” for lobbying government regulators to force self-driving car makers to use its chip. He also dismissed Zoox, Drive.ai, and Cruise. He referred to the latter as a “sellout” for selling itself to GM for more than $1 billion. 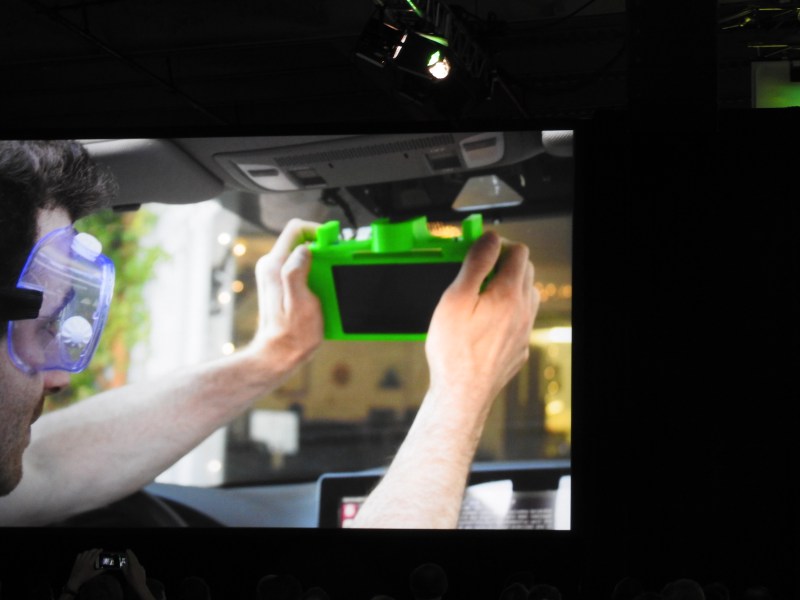 Above: The Comma One fits in a rear-view mirror slot.

“Despite my public disagreement with Elon Musk, I have so much respect for that company because they actually shipped a self-driving car,” Hotz said. “The most advanced self-driving car you can buy today is the Tesla Model S with autopilot.”

He added, “After the accident, Mobileye got scared. They want no part of innovation.” Hotz said his Comma One has the advantage of having real video data as a feedback loop for its research. He said his own self-driving car kit won’t let you totally relax and take your hands off the wheel, but claimed that the deep-learning algorithm in the car kit is as good as Tesla’s autopilot. He referred to Tesla’s autopilot as a “very early on student driver.”

Hotz noted, “40,000 people die a year from not paying attention on roads.” He noted that cruise control, which has a level of autonomy, is used with driver intervention.

“I don’t believe self-driving cars is a black and white thing. It’s all on a spectrum of these driver assistance systems that get more and more advanced.”

Hotz said his approach is more open than Tesla’s. “If they’re the iOS of self-driving cars, we want to be the Android.”