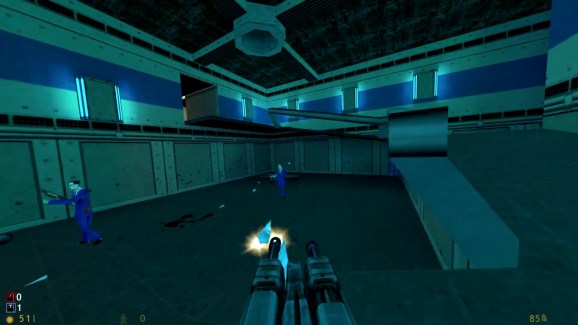 Threewave is finally working on Half-Life.

Forget about Overwatch. Today has suddenly become a good time to play the original Half-Life.

YouTube Channel Valve News Network has restored a lost mod created by Valve itself for Half-Life, the monumental first-person shooter from 1998. It’s called Threewave, an updated version of one of the oldest FPS mods ever. Threewave was originally released for Quake, which helped to popularize the modding scene back in 1996. Threewave was one of the first multiplayer shooter experiences to feature “capture the flag” as the main objective.

This Valve version of Threewave was actually discovered during a famous leak from the company, when a hacker released assets for the then unreleased Half-Life 2 in 2003. However, less famously, a Half-Life version of Threewave was also part of the leak. It was completely unplayable, crashing as soon as it launched on any server. Now, Valve News Network has it working.

You can check out the video that details more of Threewave’s history and how it was restored below.

If you want to download the Threewave mod for Half-Life yourself, you can do that here.