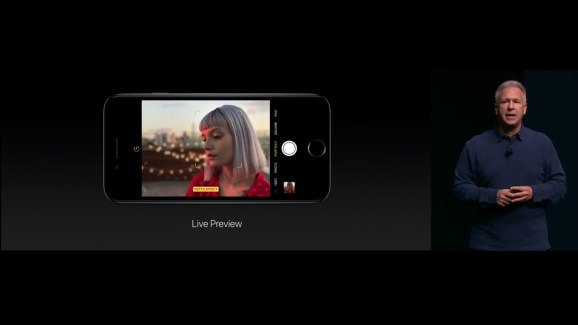 Apple vice president of worldwide marketing Phil Schiller talks about portrait mode for the iPhone 7 Plus, with its Live Preview capability, at Apple's media event in San Francisco on September 7, 2016.

Apple today started rolling out the public beta for iOS 10.1, the first update to iOS 10, which came out just a week ago.

This is a significant update, because it’s packing the feature that Apple announced earlier this month but didn’t include in the original release of iOS 10: a portrait mode for the Camera app that intelligently generates blurry backgrounds when you’re using the iPhone 7 Plus — the premium 2016 iPhone model with dual cameras.

The feature first became available on Wednesday in a beta update for developers. Early testing showed that the feature wasn’t functioning perfectly but does largely work as advertised — it was able to generate live previews of photos and, of course, actual photos with the bokeh effect that are typically only produced with high-quality lenses for standalone cameras.

Apple said the feature was only coming to the iPhone 7 Plus — that is, it won’t work on the iPhone 7, or earlier iPhones, like the iPhone 6S, iPhone 6S Plus, or iPhone SE, even if you install the update. If you’ve been trying to figure out if you should buy the 7 or the 7 Plus, you’ll want to get your hands on the latter and see if portrait mode is something you’ve just got to have.

This public beta takes up 1.8GB.